Fire burns down home in Maui Meadows; no injuries 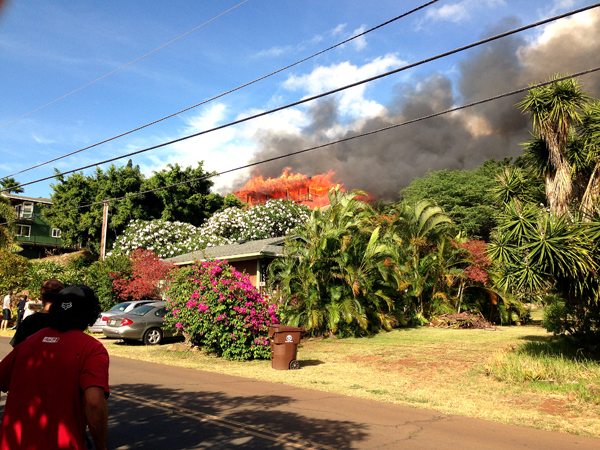 This photo of a house fire in Maui Meadows was taken at about 4:25 p.m. Monday. The fast moving fire engulfed the pole house on Keha Drive. KEVIN SARICH photo

A fast moving fire burned a pole house in Maui Meadows to the ground and scorched a nearby vacant lot Monday afternoon, fire officials said.

A battalion chief, seven companies, two water tankers and 30 firefighters responded to the blaze and were able to save the cottage on the site, Fire Services Chief Ed Taomoto said. No injuries were reported, and no one was home at the time.

“We had to put (the cottage) out a couple of times along the edges,” Wailea Fire Capt. David Fenton said at the scene. “That’s where we positioned ourselves so we could protect that. <\q>.<\q>.<\q>. There was nothing we could do to save the house.”

At 4:28 p.m., crews received a call about a fire on Keha Street, Taomoto said. Fenton, who was the first on scene, said his crew could already see a dark column of smoke rising as they rushed to respond. When they arrived at 4:34 p.m., the first and second floors were already engulfed in flames, and the fire surrounded the home on all four sides.

The fire also caught some brush and “raced up the hill to the vacant lot above,” Taomoto said. No structures were on the lot, but the fire scorched about 3,000 to 4,000 square feet of brush.

Barbara and Dan Saldivar saw the smoke from their home on Mililani Place and rode up the street on their motorcycle to see what was going on.

“It was just a ball of red flames,” Barbara Saldivar said. “Then it just collapsed straight down.”

The couple heard a series of explosions as the fire engulfed the home.

“I thought it was bullets going off,” Dan Saldivar said.

Fire officials were still calculating damage estimates and investigating the cause of the fire on Monday night. The main house was destroyed, and there was minor damage to the cottage. At 9:43 p.m. Monday, Taomoto said firefighters were in mop-up mode