For retiring Judge Tanaka, it is all about the kids 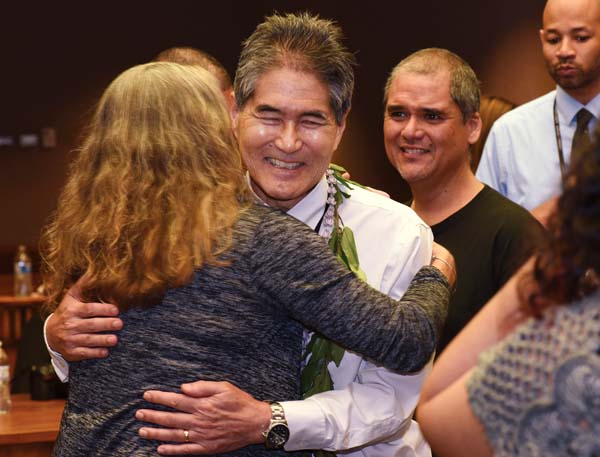 He called it unexpected because he was appointed in 2007 to be a District Court judge before the decision to have him serve in Family Court instead.

“I found the 10 years here in Family Court to be a very invaluable experience,” Tanaka said. “To me, working with the kids was the main thing — kids in divorce or juvenile court or kids in Child Protective Services, foster kids. I felt like I was doing something positive for the kids. That made my whole experience worthwhile.

“That’s why I’m retiring. I don’t think I can do any better for the kids than what I was doing as judge.”

On Wednesday, he hosted a lunch for Family Court clerks and bailiffs, court information technology team members, advocates for domestic violence organizations and others who work with Family Court.

“I just wanted to say thank you to everybody who helped run the courtroom,” Tanaka said. “They do everything.”

The lunch was in Courtroom 3B, where Tanaka presided over temporary restraining order hearings, juvenile cases, Child Protective Services matters, divorces, paternity and child support cases over the years.

“Any time we need anything, staff knows they can call on him,” said Malia Ferreira, a Circuit Court clerk supervisor. “Family Court won’t be the same without Judge Tanaka, and we’ll miss him dearly.”

Sanoe Kaaihue, acting executive director of the nonprofit Women Helping Women, said the judge was instrumental in the work done by the domestic violence agency.

“He’s pretty much a fixture,” Kaaihue said. “He oversaw some cases that were very lethal and handled them probably better than most judges could have. We wish him all the best, for sure.”

Attorney Michelle Drewyer has worked with Tanaka as a per diem judge in his courtroom for the past decade.

“During that time, I have known him to be hardworking, compassionate and good natured in fulfilling his duties as a Family Court judge,” she said. “It has been a privilege to work with him, and he will be missed by the court staff as well as the community which he has served.

“I wish him many years of good waves,” she said, referring to Tanaka’s love of surfing.

“As a result, he had a very special understanding of the needs of children and the needs of families,” Cardoza said. “He has a deep love and appreciation for the kinds of issues that confront people every day.

“Having someone so experienced and compassionate is something we’re very thankful for.”

Cardoza said he worked with Tanaka’s late father, Irwin, who served as administrator of the state Judiciary.

“His parents are outstanding people who gave much of their lives to others as well,” Cardoza said. “He’s definitely cut from that cloth.

“As a Family Court judge, he’s done an outstanding job and has been a valuable member of the Judiciary as well as member of the community. We”re certainly going to miss him on a personal and professional level.”

Tanaka, a native of Wahiawa, Oahu, moved to Maui in 1975, working as a student teacher in Hana. “I fell in love with Maui,” he said.

He taught English at Baldwin, Lahainaluna and Maui high schools during five years as a teacher.

In 1983, he graduated from the William S. Richardson School of Law at the University of Hawaii.

Before becoming a judge, Tanaka worked for 25 years as an attorney, starting in the public defender’s offices on Oahu and Maui, then representing criminal defendants while running his own law practice in Wailuku.

Deputy Attorney General Jim Rouse was a deputy public defender when he got to know Tanaka.

“When he was in private practice, he had a caseload equivalent of a public defender’s,” Rouse said. “Like his judging, he handled that with a Zen-like quality. He was very calm. He’s that harbor in a tempest.

“That carried over to his days on the bench. He’s very even tempered, very compassionate. He will be greatly missed.”

Rouse was among those who testified at a state Senate hearing when Tanaka was unanimously confirmed to be a judge 10 years ago.

“I knew he was going to be a great judge,” Rouse said. “He definitely has not disappointed in that regard.”

Joella Jones-Saito, a Circuit Court clerk who worked in Tanaka’s courtroom when he started as a judge, said his demeanor was a good fit for Family Court, where emotions can run high.

She said Tanaka “completely understood the emotions in this courtroom.”

“He always had an even keel, more of a calming disposition, and is very fair,” she said. “That’s what I admire him for. He’s just a wonderful, humble human being.”

Tanaka would give gift cards to foster children who appeared in court to try to help them through the experience. When he ran out of gift cards, he began handing out cookies.

For eight years, Tanaka was on the team of Kids First, a Judiciary program for divorcing parents to help them understand the impact of divorce on their minor children.

“That was the epiphany for me,” he said. “These kids going through divorce — I felt I could be a benefit for them and help them go through that.”

The program tied into his background as a teacher.

Some of his former students, now adults, have appeared in his courtroom with their children.

Tanaka, who is 64, said his plan for retirement is to “just enjoy life.”

He and his wife, Joanne, have a son Justin, who is in his third year of law school at the University of Hawaii, and another son, Jordan.

“When you go into the woods, you got to leave it a little bit cleaner,” he said during the luncheon Wednesday. “Hopefully I’ve left this judgeship a little bit better than what I found. After I leave these woods, I won’t leave any trash behind, no rubbish. That’s what counts — you just do your job to the best of your ability.”

The construction screens have come down on Maui Electric Co.’s Kuihelani Substation, shown last week. The new modernized substation at the corner of Kuihelani Highway and Maui Lani Parkway is scheduled for completion by the end of the year. The Maui News / MATTHEW THAYER photo