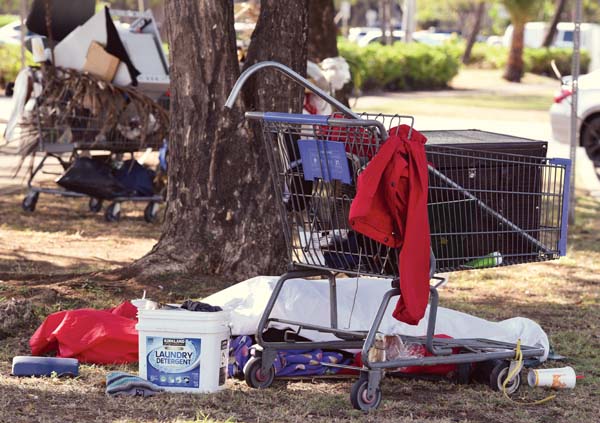 A man sleeps under a white covering next to a shopping cart parked along Alamaha Street in Kahului on Tuesday afternoon. An increase in vandalism and crime has been reported in the Kahului industrial area related to homeless people. The Maui News / MATTHEW THAYER photo

Businesses and customers in and around the Kahului industrial area report an increase in vandalism and other criminal activity they say is related to the number of homeless people in the area.

Just last week, a 50-year-old Pukalani woman said she was punched in the left arm inside the Kahului Safeway store by a homeless woman who was swearing.

“Everyone was in shock,” said the woman, who asked not to be identified. She added that her attacker “was pretty much . . . out her mind.”

The victim had her shopping basket in one hand and another item in the other. She did not challenge her attacker, who spit as she swore. The victim did not need medical treatment.

She later found out the woman was denied the use of the restroom at the store and was taking out her frustration on customers. The victim, who works nearby in the Kahului industrial area, said homeless people have defecated in the area and have been found sleeping in a parking lot. 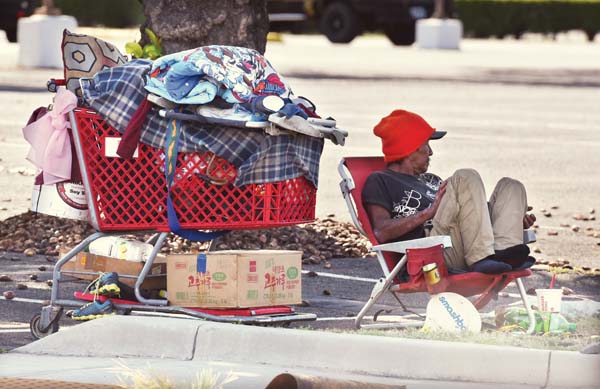 A man sits next to a shopping cart along Puunene Avenue in Kahului on Tuesday afternoon. Those who work with homeless people say they are in regular contact with homeless people in the area and have convinced some of them to enter housing. The Maui News / MATTHEW THAYER photo

At Maui Federal Credit Union on East Wakea Avenue, Chief Executive Officer Clayton Fuchigami said he has hired a private security firm to patrol the grounds because homeless people have vandalized the building, defecated in front of it and hang out in the area, concerning customers.

On Tuesday, Fuchigami said a woman was found sleeping at the credit union’s back door.

“A lot of people in that area are concerned because it seems certain members of the homeless population are getting aggressive,” he said.

Antone said he spoke to a witness, who reported chasing away a homeless man trying to set fire to Marmac Ace Hardware on Alamaha Street. And, police received a report that someone threw a rock through the store window. The incidents occurred this month, he said. 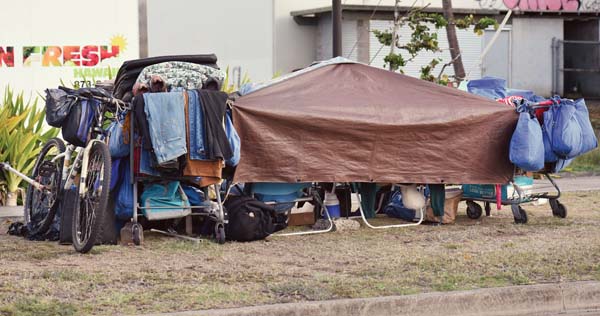 A pair of people sit in chairs beneath a tent and shopping cart residence set up along Wakea Avenue in the Kahului industrial area Tuesday afternoon. Some businesses have hired private security after experiencing vandalism and people defecating on their property. The Maui News / MATTHEW THAYER photo

Maui County homeless coordinator David Nakama said via email Tuesday that he has worked with the Maui Police Department’s Community Policing Unit and Family Life Center’s outreach staff with “many individuals who are not the easiest to work with.” Staff members have made progress every time they encounter homeless people, he added.

Among Nakama’s many duties is being a point of contact between county departments and social service agencies, regarding encampments, hot spots and general complaints.

“It may not be obvious to the casual observer, but outreach staff has convinced several of the homeless to seek help for housing, which is what (staff) offer,” Nakama said.

Lisa Kahaleauki, a Family Life Center outreach staff member, said in an email that they have been working closely with individuals from the Alamaha Street and Kahului industrial area in the past four to five months and have permanently housed 11 individuals in rental units and referred two individuals to shelter services.

“Our outreach team continues to reach out to individuals frequenting the Alamaha/Kahului industrial area on a weekly basis. However, not all individuals are willing to accept homeless services and work toward permanent housing,” she said.

Maui police are working on homeless issues as well.

At a recent Maui Police Commission meeting, Chief Tivoli Faaumu said that community policing officers were being assigned to deal with homeless people. The officers are part of CORE (Critical Outreach Through Education) and work with the county to try to help people who have fallen on hard times.

He acknowledged that some homeless people do not want help.

“That small fraction is really the majority of the complaints we are dealing with,” he said.

He added that police are working with Maui Drug Court and community groups, including canoe clubs and nonprofit agencies, to help clean up areas.

“When nobody else is available to move some of these things, they’re (the officers) out there with the community loading up dump trucks with some of the stuff left behind,” he said. “They work side by side with big property owners allowing us to get into their property and giving input on how their property is not attractive to folks.”

As for the issues in the Kahului area, Nakama said that the industrial area has been attracting homeless people because it is centralized and near food and transportation.

“They also don’t have to worry about getting chased away from residents because it isn’t near housing, but the businesses are definitely feeling the impact,” Nakama said.

At the 7-Eleven store along Alamaha Street, the manager, who only gave her name as Jovie, said one homeless man frequents the store, and she has had to call police. Sometimes, the man comes in and grabs ice from the store’s vending machines and takes condiments.

Other times, he stands outside and opens the door for customers; she has had to ask him to stop the practice.

“Right now, he is here again pushing his cart,” she said as she spoke over the phone to The Maui News.

Sometimes homeless people stand outside the store panhandling. Carts with the belongings of homeless people can be seen on a sidewalk near the 7-Eleven store. On Tuesday, there were four carts loaded with a “lot of stuff,” Jovie said.

Other business operators have complained about needing to put up new fences to secure their properties. One business even had a homeless man inside an office over the weekend because he apparently went to use the bathroom and got locked in. Others spoke about trash left behind by vagrants, and others reported finding syringes and seeing drug activity. Business operators said criminal activity and homeless people have been a problem in the Kahului industrial area for at least two years.

If the credit union didn’t have security patrols at night, Fuchigami said he would probably see an increase in criminal activity and homeless people roaming the property. He credited Maui police for surveying his property and advising him on how to protect the building with lighting. And, he was told him to cut back some palm trees that could hide vagrants.

The 50-year-old woman who was assaulted at Safeway said she wants people to be aware of the homeless and crime problems in the area.

She complained to Safeway officials about the attack and was told company officials were looking into the situation. A Safeway spokeswoman could not be reached for comment Tuesday.

The victim said she has stopped shopping at the store.

But if a crime occurs, police should be called immediately, he said. If homeless services are needed, Nakama and Family Life Center, which operates an emergency shelter and provides services to homeless people, can follow up, he added.

* Staff Writer Lila Fujimoto contributed to this report. Melissa Tanji can be reached at mtanji@mauinews.com.

A man sleeps under a white covering next to a shopping cart parked along Alamaha Street in Kahului on Tuesday afternoon. An increase in vandalism and crime has been reported in the Kahului industrial area related to homeless people. The Maui News / MATTHEW THAYER photo

A man sits next to a shopping cart along Puunene Avenue in Kahului on Tuesday afternoon. Those who work with homeless people say they are in regular contact with homeless people in the area and have convinced some of them to enter housing. The Maui News / MATTHEW THAYER photo

A pair of people sit in chairs beneath a tent and shopping cart residence set up along Wakea Avenue in the Kahului industrial area Tuesday afternoon. Some businesses have hired private security after experiencing vandalism and people defecating on their property. The Maui News / MATTHEW THAYER photo