Witness: Monitor was not needed for sand being moved for a second time 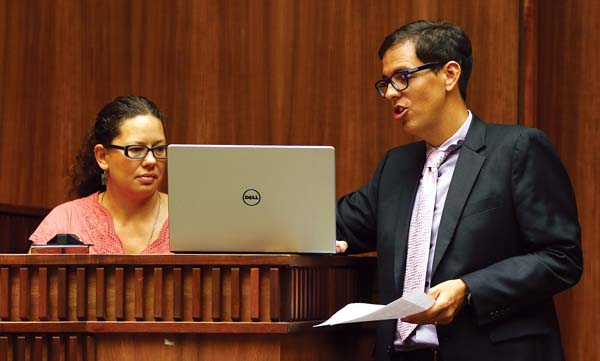 WAILUKU — A bulldozer operator, whom earlier witnesses said was moving sand without an archaeological monitor, testified Monday that he did not need one in the sand mining lawsuit against a Maui Lani developer.

Sam Miguel of contractor Honolulu Construction & Draying said he was screening stockpiled sand that had previously been monitored at the Maui Lani Phase IX site Feb. 22. He rebutted two witnesses who said in court last week that a bulldozer operator was moving sand from a large dune and later putting it on a platform without the required supervision of an archaeological monitor.

Plaintiffs Malama Kaka-nilua, Clare H. Apana and Kaniloa Kamaunu filed a lawsuit July 24 in 2nd Circuit Court to halt earthmoving activities by Maui Lani Partners at the site until the company complies with its archaeological monitoring plan. The plaintiffs also are concerned that burials have been disturbed and desecrated and that further earthmoving will cause more harm.

Maui Lani Partners officials have said that all earthmoving activities were overseen by an archaeological monitor in compliance with the state-approved monitoring plan.

Miguel explained that monitors are always present when crews are excavating raw sand but are not normally present when the stockpiled sand is screened. He said monitors from Archaeological Services Hawaii advised him when monitors need to be present and what to do when human remains are discovered.

Miguel added that raw sand is never loaded directly into trucks to be hauled away and that all operations are stopped when operators unearth bones, human remains and sometimes tree roots that look like bones.

Over the past two years, Miguel said bones have been found and monitors have stopped him. He said sometimes he stops operations if he thinks he has seen remains.

“In the machine if it doesn’t look familiar to me and looks like a bone, I’ll stop and they’ll be like, ‘What you doing?’ ” he said. “I’m like, ‘This looks like one bone.’ They look at it and they say, ‘No it’s not, it’s just calcified roots so you can continue.’ ”

Freshly excavated sand is put directly through the screening process only if they have found remains and know its exact location, Miguel said. He said one monitor is placed at the excavation site and another at the screener, per testing requirements.

Miguel said Wednesday’s witnesses, Trinette Furtado and Cody Nemet, would not know the difference between stockpiled and raw materials. He said he knew “because I put it there.”

Plaintiffs’ attorney Lance Collins asked Miguel if it is possible for bones taken from freshly moved sand to not be seen by monitors. Miguel said no because they excavate only 3 to 6 inches at a time.

After reaching 8 feet deep, though, operators “just fill up the blade” via mass excavation, Miguel said. He acknowledged at that point not all bone fragments or materials may be seen by a monitor.

Miguel’s testimony came out of order and he was not on the original list of testifiers. Judge Joseph Cardoza reserved the right to strike his testimony and granted the plaintiffs’ right to recall Miguel for further questioning.

The plaintiffs called two more witnesses Monday, who witnessed and videotaped heavy equipment moving “sand and earth” at the Phase IX site on June 26. The witnesses said no monitor was present.

Jennifer Noelani Ahia and Kaniloa Kamaunu said they were on the property to pray and engage in cultural practices when they noticed the unmonitored work. They said they sent the videos to County Council Member Elle Cochran and John Rapacz, county zoning administration and enforcement division administrator.

Maui Lani attorney Gregory Kugle asked Ahia if it made any difference to her whether the material being moved was stockpiled or raw. She said her understanding was that all movement must be monitored.

Kamaunu said he knew workers can only screen stockpiled sand, but he could not tell if the sand moved on June 26 was fresh or not.

Two other plaintiffs’ witnesses expressed concern over the irrevocable harm the development was causing to the burial site. Malama Kakanilua is named after a famous 1776 battle that occurred in the sand hills of Central Maui, where many were buried.

Kahului resident Amy Halas continued her testimony from Wednesday saying there are six temporary burial sites that have been reported to the State Historic Preservation Division, which has labeled them “extremely culturally sensitive” sites. She said the area has some “very significant” large burial sites and many more that have yet to be disturbed.

“Six burial sites were reported, but how many weren’t reported?” Halas said. “How many burials were desecrated and destroyed without the presence of an archaeological monitor? That’s the concern.”

“And you have no proof of that?” Kugle asked.

The hearing will continue at 10 a.m. Wednesday.

Free child car seat and booster seat inspections will be done from 10:30 a.m. to 1 p.m. Saturday in the parking lot ...

A homeless man was arrested after he punched a woman through her vehicle window before taking her cellphone and ...

The Maui News David Sereno, an attorney on Maui for more than 30 years, was suspended from practicing law in the ...

The Maui News Talks on photographing birds and native vegetation as firebreaks are scheduled at Kealia Pond ...

Delicacies from near and far, seafood feast in a pot, found at Maui Prime