Is it gambling? Games or gaming in Maalaea? 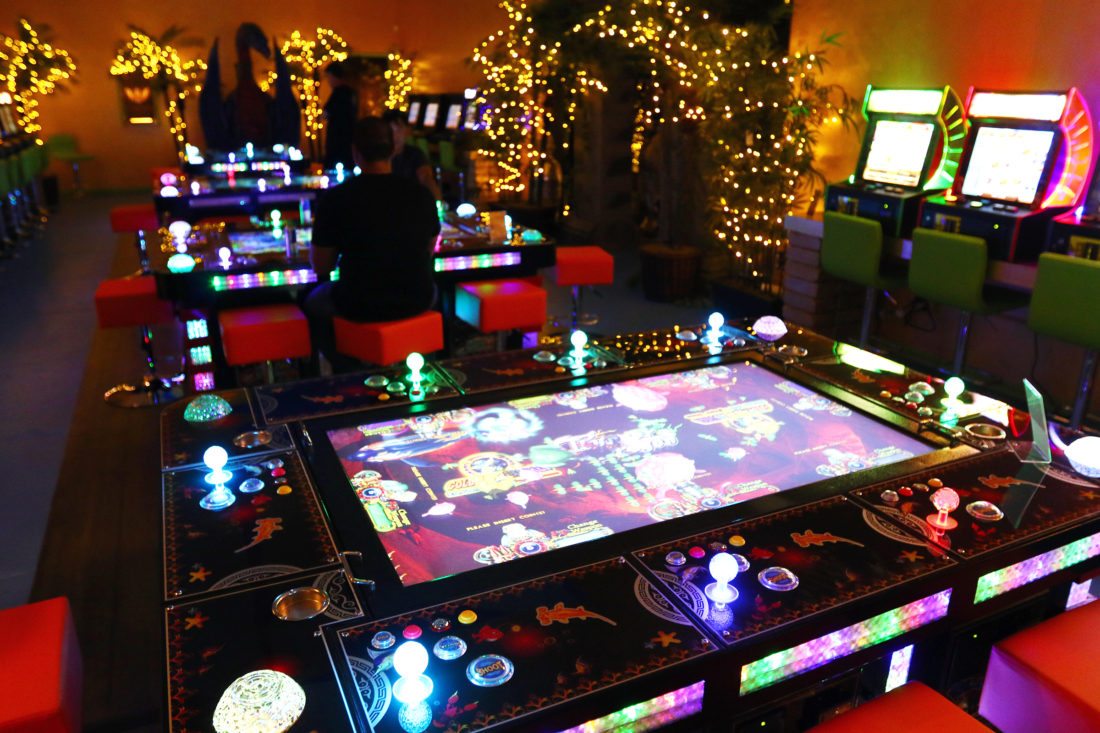 Temple of the Pharaohs, a “skill-based” video game arcade with cash returns, is located next to the Pacific Whale Foundation Ocean Store at Maui Harbor Shops in Maalaea. The arcade features 18 slot-style games and seven fish shooting games. Players must be 21 years of age or older. • The Maui News / CHRIS SUGIDONO photo

MAALAEA — A “skill-based” video game arcade with cash returns quietly opened over the weekend at Maui Harbor Shops in Maalaea, but it has caused residents and law enforcement to question if it is gambling, a county official said Tuesday.

Owner Jon Van Cleave of Wailea, however, told The Maui News that his business, Temple of the Pharaohs, is “100 percent legal” and has “nothing to hide.”

“These (games) remove all chance,” Van Cleave said Tuesday in his arcade that held a soft opening Friday. “No one can ever say these are games of gambling.”

The 4,500-square-foot arcade located next to the Pacific Whale Foundation Ocean Store is covered in ancient Egyptian decor with a custom pyramidlike entrance. The attraction features 18 slot-style games and seven fish shooting games in a spread reminiscent of the Luxor casino in Las Vegas.

Visitors must be 21 years of age or older. 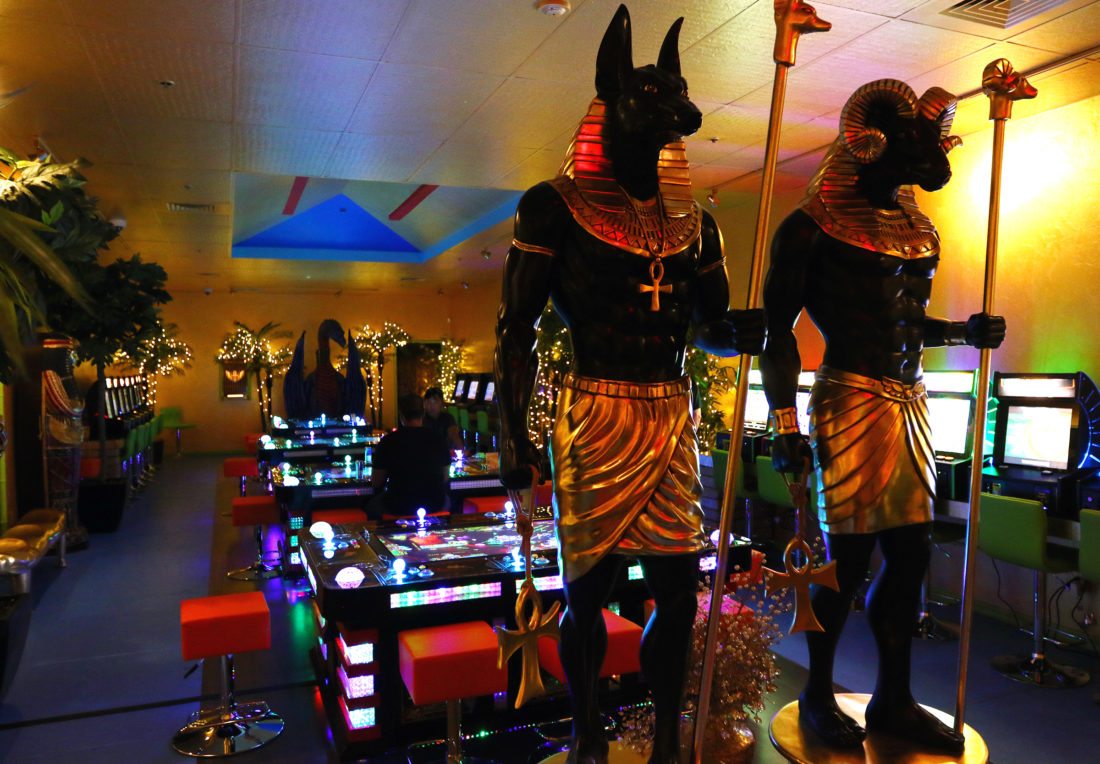 The 4,500-square-foot Temple of the Pharaohs arcade is covered in ancient Egyptian decor and will be part of a larger entertainment complex under the name Treasure Island and the Lost City of Gold. • The Maui News / CHRIS SUGIDONO photo

“There’s not too much entertainment on the island period,” Van Cleave said. “Where do the adults have a place to go where there’s not a bunch of kids running around? We thought this would be an ideal place for them.”

Van Cleave said his machines may look and play like typical slot machines, but they are so-called “no chance games,” or more commonly known as “pre-reveal” games. A mandatory preview feature displays the outcome of each possible game before players use money to play.

“You can always make it so you never lose,” he said. “You’re seeing the results ahead of time, every time. There’s no real risk to people. That’s what we’re trying to emphasize.”

One of the most popular games Van Cleave presents is his fish shooter game that can seat up to eight players. The games have become wildly popular in Asia and one is even located at the Fun Factory in the Queen Ka’ahumanu Center.

Players feed money into the game — which double as bullets — to shoot and kill fish. The more fish you kill, the more money players win.

Each shot costs a nickel, but players can change their weapons to make their bullets more powerful — yet costlier. The bigger shots would theoretically bring down larger fish for a better score.

“It’s interesting she’ll put her hand over this — there’s something she does, there’s an energy or something. She sits down and doesn’t speak any English I don’t think, but she wins.”

While Van Cleave has stood by his games, residents have commented on the company’s Facebook page and sent two complaints to the Mayor’s Office questioning the legality of the business.

Maui County spokesman Rod Antone said he has forwarded the complaints to the Maui Police Department, which is “looking into this.”

A police vice officer visited the arcade and conducted a “pretty thorough investigation,” including photographs, according to Van Cleave. He said he was supposed to meet with police to “talk story” about his business, but the officer showed up unannounced and spoke to an associate without him present.

“He went in directly and didn’t call me or make an appointment, which was a little off putting,” he said. “I was a little concerned it didn’t go as I had thought.”

Van Cleave said a Maui County prosecutor also visited the arcade on “unofficial business” over the weekend, and he demonstrated the games for him.

“He says, ‘Oh, it looks like you’ve done you’re homework. You’ve done a nice job.’ Quote unquote,” Van Cleave said. “That’s what he said. He was complimentary and a very nice person.”

Maui County Prosecuting Attorney John D. Kim said he was not aware of the business Tuesday, but would look into it. He said police would have to review the legality of the business and that prosecutors would provide assistance.

Hawaii law states that gambling occurs when a person “stakes or risks something of value upon the outcome of a contest of chance or a future contingent event not under his control or influence.” Social gambling in homes is the only legal form.

Van Cleave said the state’s gambling law is vague and allows cash return games as long as they are substantially skill-based.

“Whether it’s 51 percent or 52, it’s not clear in the law, but once you’re skilled there’s absence of chance,” he said. “The law’s kind of vague in certain areas, but what it doesn’t say is that cash is gambling and tickets are not. There’s more gambling at Fun Factory because those games are strictly chance.”

Van Cleave also said that technically no one has to pay to play his games, citing a mail-in voucher request form that provides players with $1. Players can redeem two vouchers a day.

The two game types at Van Cleave’s arcade have come under fire across the state in recent years as many such devices have been seized by police.

In 2014, Honolulu city prosecutors began cracking down on game rooms and delivered cease-and-desist letters to businesses with the fish shooting games. One Big Island game room, Triple 7 Amusement, has been raided three times over the years, with the latest occurring last month, according to the Hawaii Tribune-Herald.

Nine were arrested in the raid and 16 gambling devices were confiscated, which included “pre-reveal” games. Hilo attorney Brian De Lima, who represents the store owner, said Wednesday he plans to sue the county in the next month.

Kim recalled the last Maui raid of gaming devices as Gold Buyers in Paradise at the Kahului Shopping Center. Police said the business disguised itself as an internet cafe to play online poker, keno and other casino games.

“Our theory was that you don’t go to an internet cafe where you pay for internet time and when you leave, they give you money,” Kim said.

The business lasted several months before police seized 20 desktop computers and cash in 2012.

Van Cleave said he believes the reason Oahu’s game rooms have been raided is because owners “get greedy” and mix the illegal games with the legitimate ones. He added that his games, which came from China, Australia and other countries, have been vetted by state courts.

“Why would I invest that kind of money to have it shut down right away?” he asked.

The legality of “pre-reveal” games appears to be in question, though, after a Florida judge recently described them as illegal slot machines. The judge determined that the “play pattern” is an “illegal gaming scheme designed to circumvent gambling prohibitions.”

The fish shooting games, which are marketed under a variety of names, also have been questioned.

In 2015, gambling consultants Gaming Laboratories International — one of the nation’s largest game testing facilities — concluded that one of the shooters “possesses all of the characteristics typically associated with a gambling device,” according to VICE magazine.

Analysts of the game “King of Treasures” found that success changed little based on skill. In fact, when the game was left unattended with the fire button permanently engaged, the amount of money won back was in line with the machine’s lifetime average return, the magazine said.

Van Cleave said his arcade is secure and in a great location, “not one of those seedy Chinatown places.” He said there is only one way in and out, and his operation has tighter security than a bank.

“We make sure it doesn’t have that (criminal) reputation,” he said. “I don’t want it and don’t want to be associated with it. I’ve worked hard to make a very upscale environment.”

Van Cleave began work on the arcade in November when friends encouraged him to “open something fun for tourists and locals.” His master plan under the umbrella name, Treasure Island and the Lost City of Gold, is to expand into neighboring lots to develop a 10,000-square-foot adult and family friendly entertainment complex.

“We’re going to have this gigantic mountainside with a slayer beast that’s totally animatronic,” he said. “We’ll have a corridor about 30-feet-long that provides a Disney-like experience through the doors and rainforest.”

Van Cleave said he hopes to begin expanding as soon as possible. He plans to hold a grand opening for the adult arcade in about a month after “working out all the kinks” in the games, workers and overall business. He added that he plans to add a reception area and acquire a liquor license in the near future.

The arcade is open daily from 11 a.m. until the last person leaves, Van Cleave said.

“I’m trying to make it someplace interesting and enjoyable,” he said. “We don’t believe in gambling. We believe in people having fun.”

Temple of the Pharaohs, a “skill-based” video game arcade with cash returns, is located next to the Pacific Whale Foundation Ocean Store at Maui Harbor Shops in Maalaea. The arcade features 18 slot-style games and seven fish shooting games. Players must be 21 years of age or older. • The Maui News / CHRIS SUGIDONO photo

The 4,500-square-foot Temple of the Pharaohs arcade is covered in ancient Egyptian decor and will be part of a larger entertainment complex under the name Treasure Island and the Lost City of Gold. • The Maui News / CHRIS SUGIDONO photo

Fred Davidson is presented with a lei by Masayo Sutton while being honored during the state high school baseball tournament on May 7, 2016. • The Maui News / ROBERT COLLIAS photo