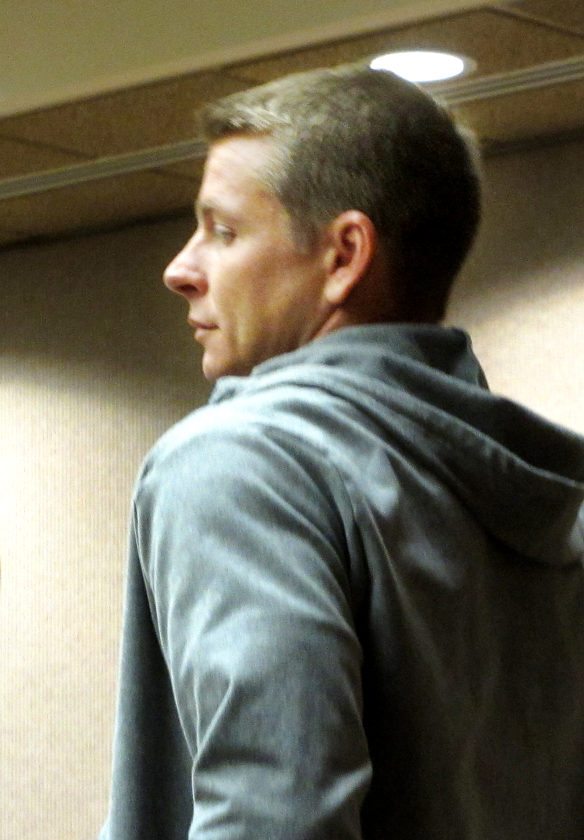 Casey Brummel, a former Baldwin High School teacher who is charged with sexually molesting a student, was arraigned in 2nd Circuit Court on Wednesday. He pleaded not guilty to four counts of third-degree sexual assault. • The Maui News / LILA FUJIMOTO photo

Casey Brummel, 35, of Lahaina pleaded not guilty to four counts of third-degree sexual assault during his arraignment Wednesday in 2nd Circuit Court.

Brummel was an English teacher at Baldwin High when he is alleged to have sexually molested the girl while she was taking a benchmark test at the Wailuku school, said Deputy Prosecutor Iwalani Gasmen.

In addition, she said numerous students made complaints about Brummel, saying “that the defendant would contact them and make inappropriate comments, either at school or out of school.”

She said Brummel asked to go to a student’s house when her parents weren’t home. He “also told a minor he wanted to have sex with her because she was pregnant,” Gasmen said.

“The defendant’s behavior indicates he poses a serious risk or danger to the community,” Gasmen said.

She asked that Brummel be ordered to surrender his passport, saying he had a plane ticket to travel to Osaka, Japan.

Brummel’s attorney, David Sereno, said Brummel’s girlfriend had booked and paid for the ticket because she wanted Brummel to go with her to Japan.

“My client has no intention of leaving the state,” Sereno said.

He agreed to hold Brummel’s passport.

Second Circuit Judge Peter Cahill ordered Brummel to stay away from the girl and her family. He was ordered not to go to Baldwin High and not to leave Maui unless he has written approval from the court.

After being arrested on the indictment Sept. 13, Brummel posted a $40,000 bail bond to be released.

The Maui News WAILUKU — A man arrested for burglarizing homes in Wailuku allegedly entered the homes under a ...

WAILUKU — Bail was set at $150,000 for a Makawao man who was arrested after he allegedly fired a rifle toward ...

The Maui News Public restrooms along Hana Highway will remain closed until further notice while the highway is ...

The Maui News The state Department of Education has been given the go-ahead to modify graduation requirements and ...