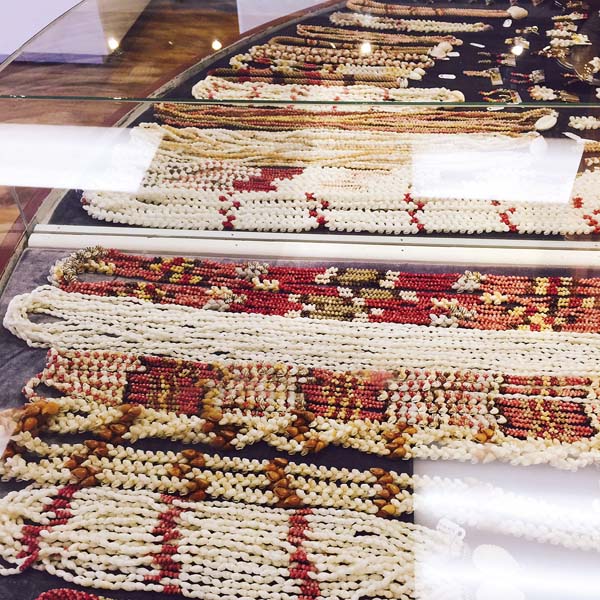 Police returned a dozen of the 25 Niihau lei Tuesday that were stolen from Maui Hands in Makawao in July. Maui Hands photo

Maui police returned a dozen priceless Niihau shell lei to a Makawao store Tuesday where security cameras captured a man stealing about a $100,000 worth of merchandise three months ago.

“We were in tears — the whole staff was,” Maui Hands owner Panna Cappelli said of the lei homecoming. “It was just an amazing reunion. What we got back was all of the major pieces. All of the really priceless, collector, museum pieces.”

Surveillance video caught a Caucasian man about 6 feet tall with dark hair smash a glass door at 4:56 a.m. on July 17 at the back of Maui Hands on Makawao Avenue. The man entered the store and put on a black ski mask, while wearing a black hoodie with a large skull on his chest, blue pants and gray shoes.

In less than a minute, the man stole 25 of the rare lei and five expensive hunting knives.

“It was like a missing person kind of thing, if they had just gone down in a fire I’d probably have been over it,” Cappelli said. “But there was always the possibility of getting them back, even though I thought there was no way they can come back. It doesn’t seem like stolen items ever get back to the person.”

About $70,000 worth of leis were returned, which included a couple of rare pieces valued over $20,000 each, Cappelli said. She said two of the knives, which are about $475 each, also were returned shortly after the theft when they were dropped in the neighborhood.

“It’s funny. I don’t think in terms of the retail value. It was really an emotional value,” she said. “We had three crying women in the gallery today and I think the detective was a little embarrassed.

“I know some details, but I don’t know what I can share. It’s ongoing. They’re not finished trying to find the rest.”

Lt. Derrick Lopez, head of the Property Crimes Unit of the Criminal Investigation Division, said police are continuing to track leads and have made several arrests. He could not provide more details, noting that it is an ongoing investigation.

“It was a team effort by officers from the Vice unit, Special Response Team and Wailuku detectives to recover the Niihau shell leis,” Lopez said. “It was outstanding police work that led to the leis being recovered and returned back to the owner.”

Cappelli said she does not know how police recovered the lei, but she does not believe they were sold. She said friends, business associates and “everyone involved with Niihau” has sent her pictures of lei being sold to them to ensure they were not hers.

“None of them were mine, but it was very nice that people were reaching out,” she said. “If any of them had tried to be resold, I probably would’ve known.”

The remaining 13 stolen lei are Poepoe round weave leis and Kahelelani single, double and triple strand lei, Cappelli said. She said they are relatively more popular and range from $400 to $3,400.

Since the incident, Cappelli has increased security at her Upcountry and Paia galleries. She said police advised her on thieves’ techniques, and she now has iron gates over her doors.

“This kind of instance breaks you of that naivete really quick,” she said. “I got a real eye-opener when I saw how easy it was for him to get into my door.”

Cappelli said she hopes to recover the remaining stolen items, but she was thankful for the support from the Niihau community. She has been collecting Niihau shell lei and jewelry, which has become increasingly rare, for the last two decades.

The lei and jewelry are protected by state law, which prohibits the sale of seashell items with a description or label using the term Niihau unless 100 percent of the shells are from the island and it is made entirely in Hawaii, according to the Ni’ihau Cultural Heritage Foundation.

“A lot of people had read about the theft, and a couple of them came to me with some pieces that were part of their family for a long time and sold it to me so I could build up my collection,” she said of the island’s residents. “Four of the pieces I got back today could not be replaced because the shells are not there anymore. The pieces are not as rich and as valuable as those pieces.”

The Maui News A threat to lay off more than half of its reporting staff did not materialize at the Honolulu ...

The county pool reservation phone line will not be taking calls Friday due to the Fourth of July holiday. Pools ...

The state Department of Land and Natural Resources has been issuing hunting licenses and stamps since June 15 for ...

The 94 degree high temperature Monday at Kahului Airport broke the record for the day set in 1980 by one degree, ...

With our faults and failures, redeeming hope perseveres