9.4 percent of Hawaii residents are part of the state Employees’ Retirement System 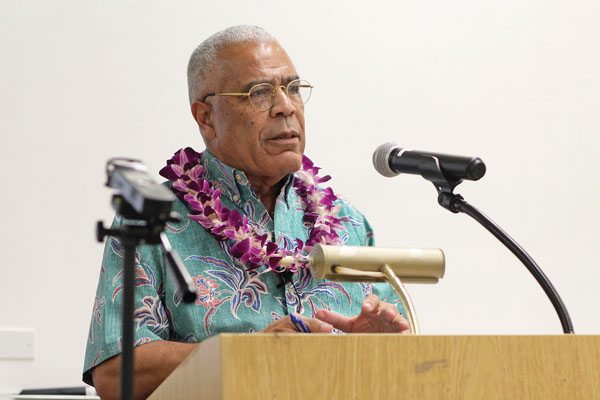 WAILUKU — An overhaul of Hawaii’s public employee pension system helped avoid a crisis back in 2012, but the state with the nation’s longest life expectancy still needs to do more to help fund the retirement of its employees, said Thomas Williams, executive director of the state Employees’ Retirement System.

“We’re on a solid track toward full funding. We just have to be constantly on alert to make sure that we don’t get off track,” said Williams, who was at the Cameron Center on Monday evening for a talk hosted by the Grassroot Institute of Hawaii.

More than 135,000 Hawaii residents — 9.4 percent of the population — are members of the state ERS, which provides retirement benefits to state and county government workers. The amount that employees contribute per month varies by plan, occupation and years of service. Pension plans generally make up about a third of a person’s retirement savings, Williams said. The other two-thirds come from Social Security and personal savings.

“While it is costly to fund these retirement programs, they do create a significant benefit,” Williams said. “We’ve taken about $975 million a year from employers and employees and pay out about $1.3 billion in benefits to members.”

However, the state owes more than it has, leaving the ERS with an unfunded liability of $12.4 billion as of June 30, 2016, the most recent figure available. Williams described it as “the difference between the promises made and the money on hand to meet those commitments.”

That means the public pension system is 54.7 percent funded. A safer level to be at is 80 to 100 percent, Williams said. Also impacting pension payouts are Hawaii’s high cost of living and long life expectancy of 81.3 years, the highest in the nation according to the 2013-14 Measure of America project.

But because of the recent changes, the ERS expects to be fully funded by 2046.

“That’s the power of the contribution increase,” Williams said. “Employer and employee costs will go down dramatically once the unfunded liability is addressed.”

Before 2012, benefits owed to employees were growing at rates that the ERS was unable to fund. So the state brought in a series of reforms. Workers had to contribute more to the system; overtime was not included in compensation; and new employees hired after July 1, 2012, would get fewer benefits and need 10 years of service — instead of five — to qualify for retirement benefits.

“That’s a big move to address the unfunded liability going forward, but it does little, if anything, to address the existing unfunded liability because that’s made based on the promises that had been made to the existing employees,” Williams said. “So nothing changed for existing employees. They continue to accrue benefits at the pre-reformed rates. That’s going to continue to . . . flow through the system for the next 40, 50, 60 years or more as people retire and live for a very, very long time here in Hawaii.”

Money for retirement benefits comes from workers and employers, as well as investments that the ERS has made in stocks, real estate and other areas. Over the next few years, general employer contributions to the system will increase from the current 18 percent of employee wages per pay period to 24 percent in fiscal year 2021. Employers of police and fire would go from 28 to 41 percent because of the higher benefits in those occupations. Another change the ERS made was to lower the assumed earnings from its investments.

“Pension plans had been assuming they’d get 7, 8 percent, 9 percent a year,” Williams said. “And that’s been gradually coming down. We lowered our earnings assumption in a conservative way to about 7 percent (which) we think is realistic.”

Legislators also have put a moratorium on increasing benefits until the public pension system can be fully funded, “but that hasn’t been strictly adhered to.”

“If we’re going to stabilize the funds, we’ve got to be serious about not increasing benefits, because every increase in benefits comes with a corresponding increase in liability,” Williams said.

The privatization of three Maui County hospitals in July also impacted the system. The loss of about 1,500 state employees who had been contributing to the ERS increased the state’s unfunded liability by $280 million. But the ERS isn’t trying to fix that problem specifically.

“They don’t attempt to address it independently by writing a check for $280 million,” Williams said. “That liability is included in the overall liability that we’re trying to fund over time.”

Overall, the director said the health of Hawaii’s public pension system is somewhere in the middle, “in the cautionary” zone, having avoided the crisis that is growing across the rest of the nation, where private pension plans are disappearing and 45 percent of working Americans don’t have retirement savings, according to the nonprofit National Institute on Retirement Security.

“I think we have in fact averted the crisis here in Hawaii, but there is also a crisis more significantly around the nation as it relates to the management of these public retirement programs,” Williams said.