Students saddened and frustrated that school is damaged by fire again 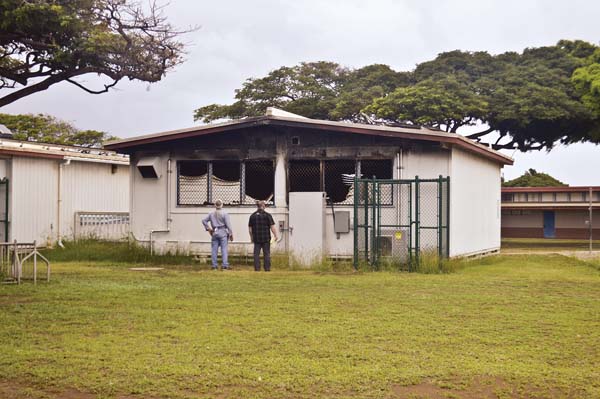 DOE: School is set to reopen for class Thursday

The state Department of Education continued the school closure through Wednesday; the school is set to reopen for students Thursday. The staff will be reporting to work as the school comes up with academic contingency plans, a news release said.

The Education Department’s facilities branch is working with the Maui complex to ensure the safety and security of the Kahului Elementary campus as soon as possible, the news release added. Third and 4th-grade classrooms were affected by the fire.

In a separate statement, Assistant Superintendent Dann Carlson said officials need to assess the structural safety of the damaged classrooms in F building and to secure access. The department also is assessing repairs to portable classrooms, which had relatively minor damage. 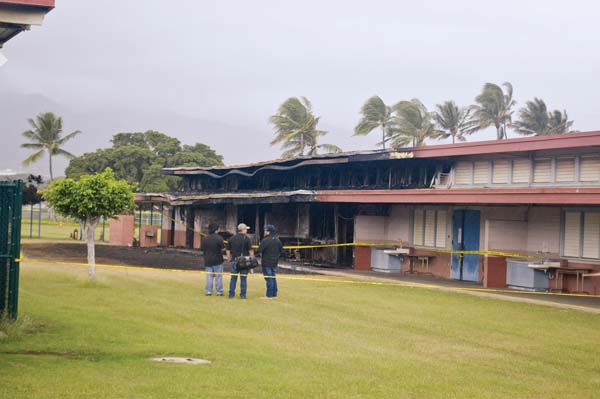 A classroom wing at Kahului Elementary School, shown on Monday being inspected, burned on Friday night. In 2010, another fire destroyed other classrooms adjacent to this wing.

“We are also engaged with contractors to move and acquire trailers. The long-term fix is to replace the permanent structure. The department is looking at options to expedite that process, and, in the meantime, the Maui complex schools are pitching in to assist where they are able,” Carlson said in an email Monday.

Maui Police Lt. Gregg Okamoto said Monday that there were no updates on the case, and police were looking for possible suspects with the investigation ongoing.

Maui Crime Stoppers pays cash rewards up to $1,000 for information leading to the arrest and indictment of people responsible for felony crimes, the recovery of stolen property or seizure of illegal drugs in felony cases or the capture of felony fugitives.

Okamoto confirmed that police were in the school area Friday night before the fire after receiving a call about suspicious people walking around the campus. Police left after no one was found.

The fire was reported about 30 minutes later, Okamoto said. Fire officials said the alarm was at 9:33 p.m. Friday, with seven companies and a battalion chief responding.

Police said a building in the middle of campus was partially in flames when fire crews arrived. The exterior of an adjacent building also was damaged. A portable classroom closer to the Maui High School parking lot was engulfed in flames as well.

In all, four classrooms and two portable classrooms were damaged in the fire, the Education Department said.

The department said Monday that it did not have a damage total yet, but police estimated structural damage at $900,000 and contents at $300,000. No injuries were reported.

Kawehiwehi Nakamoto-Palmero, a 4th-grader whose portable classroom was damaged, said she was both sad and mad over the incident “because all my life work from August to November is gone.”

The 9-year-old said she was supposed to go on a field trip Monday but couldn’t because the school was closed for students.

“It’s a waste of money and takes away little kids’ dreams,” she added.

Her mother, Kristie Nakamoto, said her daughter cried as she saw images of the fire via Facebook.

Her daughter also was worried about a Lego clock in the portable classroom. The kids named it “Lloyd.”

Nakamoto said she knows how teachers spend their own money to furnish their classrooms and buy supplies.

“That’s what I feel bad about. People have no consideration and do things like this and take away from the kids and teachers. It’s like taking away from our community,” she said.

Another parent, Stacy Woodson, said her children, who are in the 1st and 5th grades at the school, also cried as they watched the videos of the school burning via social media Saturday.

“We had to reassure them it’s not the whole school,” she said.

Woodson, who also attended the school in her youth, said it was “heartbreaking” that people “in an indirect way would attack our youth.”‘

She said the fire comes on the heels of another upsetting incident on Nov. 17, when the lifeless body of a man was found early in the morning next to the campus. Police said there were no obvious signs of foul play or suspicious injuries to the body.

Counselors and behavioral health specialists were made available to help staff members and students, who “don’t know what all of that means,” she said.

The PTSA has set up a GoFundMe crowdfunding site online to raise money for the school. As of Monday afternoon, $4,360 had been pledged.

PTSA President Stephanie Pratt and Principal Keoni Wilhelm could not be reached for comment Monday.

Woodson said the damage should be covered by insurance but knows it could take time to get the funds. He and Keith-Agaran will push for the disbursement of funds sooner than later.

The state representative said he went down to the school Friday night and Saturday and has been in contact with state Department of Education officials. He is chairman of the House Education Committee.

The wing of classrooms that burned Friday night is next to another set of buildings that were damaged in a fire in 2010. Ironically, Woodson said he learned that construction on those classrooms will begin this month or next month. Those classrooms are to house art, dance and science programs.

Seven years is too long to wait for rebuilding of damaged classrooms, and he does not want to see that happen to the classrooms damaged by Friday’s fire.

Kahului Elementary has been victimized by vandalism recently and the installation of security cameras is in the works, he said.

As a parent of two children currently at the school, he called the fire “disconcerting and sad.”

“These are kids. Why are you guys doing this?” he asked rhetorically.

A classroom wing at Kahului Elementary School, shown on Monday being inspected, burned on Friday night. In 2010, another fire destroyed other classrooms adjacent to this wing.

Center court at the Queen Ka‘ahumanu Center becomes a virtual winter wonderland during last year’s “Let it Snow” event on Dec. 22. The “snow” is set to fall again.

Yukie Ruidas, 4, wears her winter gloves while catching “snow” with mom Kekane Ruidas during one of last year’s “Let it Snow” events at the Queen Ka‘ahumanu Center. The Maui News / MATTHEW THAYER photos

First photo: A sign-waving crowd of about 190 people makes its way along Puunene Avenue Saturday morning while ...

PUKALANI — This was history for the King Kekaulike High School girls soccer team. After peppering the goal for ...