Threat assessment of eruption at Haleakala crater is moderate 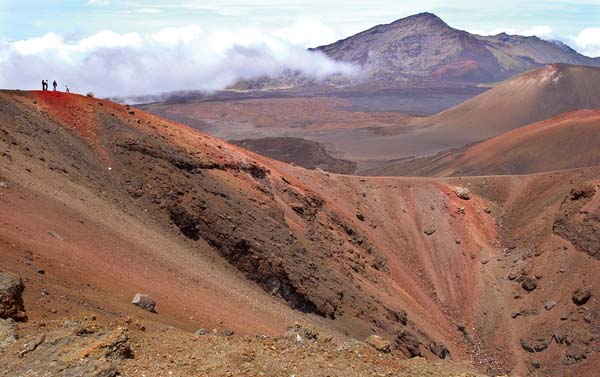 The volcanic activity that began building Haleakala occurred about 2 million years ago. Haleakala is listed as a moderate threat volcano, and scientists say it’s not a matter of if but when another eruption will occur. The two most likely rift zones from where volcanic activity could take place originate in the Haleakala Crater. -- The Maui News / MATTHEW THAYER photo

U.S. Geological Survey currently is updating its decade-old assessment of the danger of potentially active volcanoes in the United States, including the “moderate threat” assessment for Haleakala.

USGS Hawaiian Volcano Observatory officials on the Big Island don’t expect that assessment to change. Currently, there are no precursors for an eruption, such as micro-earthquakes or ground deformation. The House of the Sun is quiet . . . for now.

The East Maui mountain, rising more than 10,000 feet from sea level and the island’s top tourist attraction, erupts every 200 to 500 years, the volcano observatory said.

“Because little has changed about the volcano during this time, future eruptions should be expected,” the volcano observatory said in a 2010 publication. “In fact, the probability of renewed eruptive activity is sufficiently large that the need for lava flow hazard zones on East Maui cannot be ignored.”

Based on past volcanic activity, “the most likely site of the next eruption” will be along the southwest rift zone, a line of vents that crosses Haleakala Crater and descends to La Perouse and Keone’oi’o on the southwestern flank of the mountain, where the most recent eruption on the island occurred, or along the east rift zone from the crater through Hana town and 80 miles into the ocean. 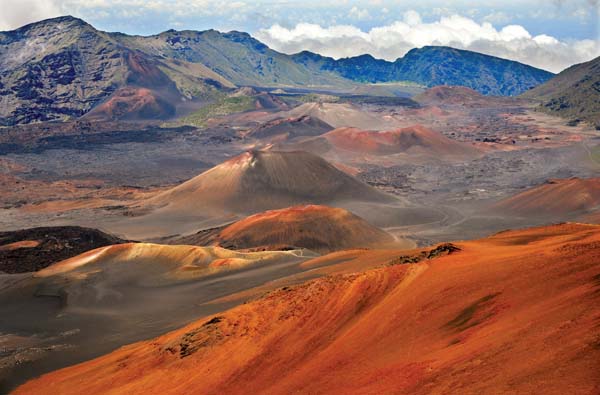 The cinder cones in Haleakala Crater are as young as 800 years old. The east and southwest rift zones, where the island’s most recent eruptions have taken place, extend down the mountain from the crater. -- The Maui News / MATTHEW THAYER photo

“Typically, Hawaiian volcanoes erupt at their summits and/or along one of their rift zones. Based on geologic mapping, it appears that Haleakala erupted predominantly from those same areas in the past, and that’s our best guide for where the volcano will erupt in the future,” Jim Kauahikaua, volcano observatory research geophysicist; Tina Neal, scientist in charge; and Janet Babb, geologist, said in a joint email response to The Maui News.

They caution, though, that they “cannot predict with complete certainty in advance whether it will erupt at its summit or along a rift zone . . . (because) each volcano and each eruption behaves differently.”

For example, Mauna Loa eruptions typically begin at the summit and about half the time continue from one of the volcano’s rift zones. Kilauea has a different pattern of eruptive behavior.

“Because we have no eyewitness records of Haleakala eruptions, we know little about its eruptive patterns, but we do know where eruptions have occurred and where lava has flowed in the past several thousand years,” they said.

While the likelihood exists, a volcanic eruption does not appear in the offing in the near future. Prior to an eruption at Haleakala, a large number of micro-earthquakes would be expected, caused by the breaking of rock as magma moves to the surface, the volcano observatory officials said. Seismometers could help detect the location of an eruption. 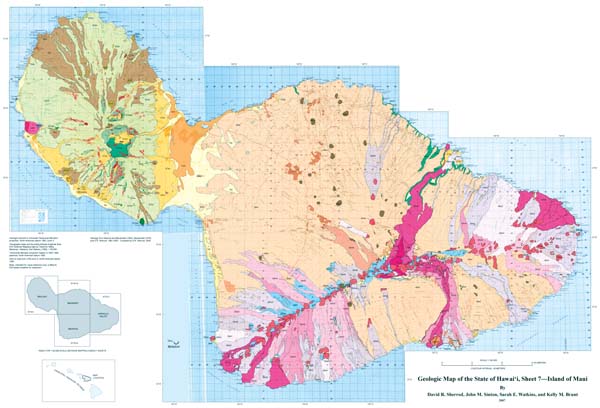 Eruption patterns on Haleakala are charted on this map. The youngest lava flow is at Kalua o Lapa in the lower southwest rift zone sometime between 1420 and 1620. It created the ‘Ahihi-Kina‘u Natural Area Reserve. -- U.S. Geological Survey graphic

There also would be a deformation of Haleakala. When magma accumulates beneath a volcano, the volcano inflates like a balloon. By measuring this deformation, the depth and amount of magma can be estimated, a USGS article said.

“Importantly, Haleakala is quiet seismically. In other words, there is no sign that the volcano is restless at all,” the observatory officials said. “Because we see no signs of unrest at Haleakala (no earthquakes, no ground deformation), the volcano will not erupt tomorrow, and it is unlikely that it will erupt in the near future.”

There have been no earthquakes or ground deformations in the last couple of decades of monitoring Haleakala, they added.

But they caution: “Because the most recent eruption of Haleakala was only a few hundred years ago . . . we feel that it is likely that the volcano will erupt again, but we cannot say when.”

When Haleakala erupts again, it will not be an explosive Mount St. Helens kind of event, Haleakala National Park officials said. In fact, volcano observatory officials believe the next eruption will probably be smaller in volume than typical Kilauea and Mauna Loa eruptions. 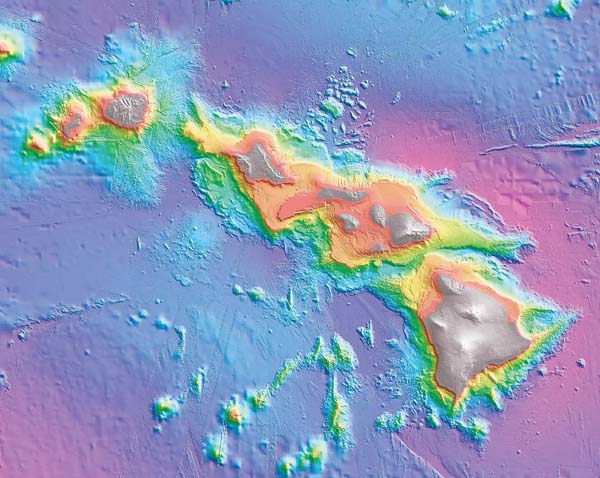 This graphic shows the Hana Ridge, part of the east rift zone of Haleakala, extending out into the Pacific Ocean. It also illustrates the undersea geography of Maui Nui, which began with eruptions in the Penguin Bank off Molokai. -- U.S. Geological Survey graphic

Over the last 13,000 years, Haleakala, considered a waning post-shield volcano, has erupted only 10 percent of the volume of the 8,000-foot Hualalai on the Big Island that last erupted in 1801 and an even smaller percentage of volumes of Mauna Loa, which last erupted in 1984, or the currently erupting Kilauea, volcano observatory officials said.

“Based on the volcanic deposits from recent eruptions on Haleakala, which include lava flows and cinder cones, we assume that future eruptions will be similar . . . effusive eruptions, something like the lava flows on Kilauea today, and slightly vigorous lava fountains and fissures that could produce cinder cones and spatter ramparts, also like those that have occurred on Kilauea in recent decades,” they said.

Haleakala is considered a moderate threat volcano in the USGS report that is currently in revision.

“We do not expect this assignment to change,” the volcano observatory officials said.

The threat level is derived by a combination of the volcanic hazards and the exposure of potential eruptions, including their type and frequency. Another key factor is the risk of volcanic activity to population centers, key industries, airports and other critical facilities.

Kilauea and Mauna Loa are “very high threat” volcanoes because they erupt frequently and when they do erupt, threaten people and facilities. For example, a 1986 eruption from a Kilauea vent wiped over the town of Kalapana.

Hualalai is considered a “high threat.” Haleakala and Mauna Kea are of “moderate threat.”

“The very high (Mauna Loa and Kilauea) and high (Hualalai) threat volcanoes in Hawaii are prioritized for adding monitoring instrumentation as our resources allow,” said the volcano observatory officials. “Haleakala being a moderate threat is not at the top of the USGS list for adding instrumentation, but it is certainly not forgotten.”

About a million years ago, Maui County would have appeared much like the multi-volcano Hawaii island, only 50 percent larger.

At least, seven volcanoes formed Molokai, Lanai, Kahoolawe and Maui, a USGS article in January 2016 said. The Penguin Bank, now submerged off the west coast of Molokai, is the oldest of the volcanoes, maybe over 2 million years old.

Studies indicate that Maui Nui was formed as the supply of magma increased a few million years ago, the USGS article said. Niihau and Kauai, the oldest of the major islands, are single island volcanoes; Oahu is a two volcano island; and Maui Nui and the Big Isle, the youngest islands, are multiple volcano islands.

The islands are formed while on a hot spot in the ocean and gradually move off as the tectonic plates of the Earth run their course.

East Molokai and West Maui volcanic activity lasted longer with eruptions about 300,000 years ago; the most recent eruption from those volcanoes formed the Kalaupapa peninsula.

The West Maui Mountains are much older than Haleakala, the volcano observatory officials said. The most recent eruptions occurred between 400,000 and 600,000 years ago.

“Because of their ages, we feel that it is unlikely that this volcano will erupt again,” the volcano observatory officials said.

Over time, the weight of the volcanoes on the seafloor caused sinking and coupled with rising sea levels flooded the land between Maui Nui’s volcanoes, the article said.

The continued “subsidence” effects could also lead to Haleakala and the West Maui Mountains becoming separated by a seaway “within another 10,000 to 20,000 years,” the article said.

The volcanic activity that began building Haleakala started about 2 million years ago, the volcano observatory said on its Haleakala web page. Its early history is buried under flows thousands of yards thick. The oldest flows visible are about 1.1 million years old along the north shore from Honomanu to Nahiku.

Haleakala’s post-shield building era began about 900,000 years ago. The youngest part of the post-shield stage has been named Hana Volcanics, which includes the cinder cones along the floor of Haleakala Crater. Those cones are as young as 800 years old, and cinder cones younger than 500 years old are found along Haleakala’s southwest and east coasts.

The youngest lava flow, Kalua o Lapa, erupted from the lower southwest rift zone sometime between 1420 and 1620 and created the ‘Ahihi-Kina’u Natural Area Reserve, said the volcano observatory officials. The flow was at least 320 million cubic yards and covered an area of 1,000 acres.

These figures do not include the lava that entered the ocean, they said.

“We don’t yet have an idea of how much lava was emplaced on the seafloor,” they said.

The Haleakala web page says that another 500 years or more may pass before the next eruption, though it is possible that new eruptions will occur in the lifetimes of current residents.

Dave Sherrod, a now-retired USGS geologist who most recently studied Haleakala, wrote that the “volcanic record suggests that the next 1,500 years will be similar to the past 1,500 years.