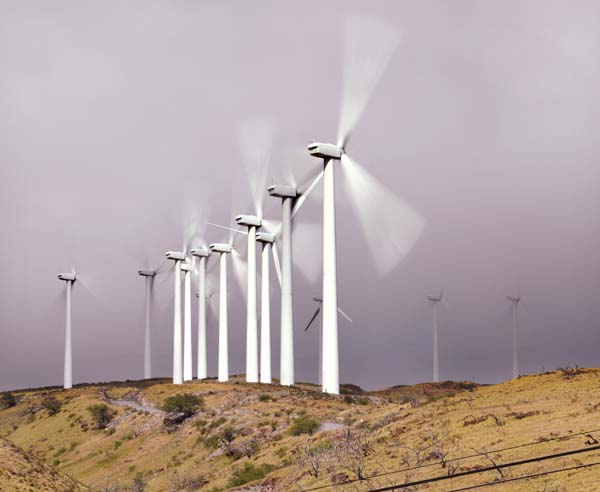 Decades after the Hawaiian hoary bat was labeled an endangered species, its population remains a mystery to scientists — which is why Maui conservation groups are hesitant over one wind farm’s request to increase the number of bats it’s allowed to incidentally kill.

Kaheawa Wind Power II, a 21-megawatt wind energy facility on the slopes of the West Maui Mountains, wants to increase the number of permitted bat fatalities from 11 to 62 adults and nene fatalities from 30 to 48 adults over the next 15 years.

“Just because we’re killing more than we thought we would kill doesn’t mean we should get a permit to kill more,” Albert Perez, executive director of Maui Tomorrow, said during a public hearing Monday. “We may be undermining the recovery of the species. We have no idea because we don’t know the true population.”

The Hawaiian hoary bat, or ‘ope’ape’a, is Hawaii’s only native land mammal, according to the U.S. Fish and Wildlife Service, which adds that “relatively little research has been conducted” on the bat’s habitat and population.

The nocturnal creature with a brown-and-gray coat and white-tinged ears preys on insects and is believed to roost among trees in areas near forests. The bat has been spotted on Hawaii island, Maui, Molokai, Oahu and Kauai, and population estimates have ranged from hundreds to a few thousand.

In October 1970, the bat was listed as a federally endangered species.

The nene, meanwhile, has been listed as endangered since 1967 and has an estimated statewide population of around 2,500, according to the International Union for Conservation of Nature’s Red List.

Before wind farms were built on the mountainside above Maalaea, “no one really knew the frequency of bat usage of the area,” explained Fern Duvall, wildlife biologist and the Maui Nui manager for the state’s Native Ecosystems Protection and Management program.

“The tools we had at the time were not as efficient at measuring bat activity,” said Mitchell Craig, Habitat Conservation Plan compliance manager for TerraForm Power, which runs the Kaheawa wind farms. “There was no other wind farm, so there really wasn’t an idea about what the take (of bats) would be. They basically used the best science at the time to attempt to estimate what the take would be.”

But statewide, the number of fatalities is already approaching those set limits. In total, Hawaii’s five major wind farms have reached 146 out of 180 permitted bat fatalities, and most are barely five years into their 20-year permits, according to an October 2016 report by the state Department of Land and Natural Resources.

Auwahi, operated by Sempra U.S. Gas & Power on the southern slopes of Haleakala, has recorded an estimated 23 bat fatalities since 2012, according to the report. Its permit allows 27 incidental bat fatalities by 2037.

Kaheawa Wind Power II is permitted 30 incidental nene deaths and 11 incidental bat deaths between 2012 and 2032. As of Oct. 1, an estimated 13 bats and 11 nene have been killed at the site, department officials said Monday.

Expectations have changed, and so have scientific methods, Craig said, which is why KWP II is asking to amend its conservation plan. But the lack of information on the population of the bat is what’s concerning environmental groups like the Sierra Club Maui Group, which earlier this year expressed its support for renewable energy but had concerns about an increase in bat fatalities.

TerraForm has taken actions to counter the deaths, such as removing vegetation around the site that might attract nene and increasing the minimum speed at which the wind turbines start to generate energy at night to avoid the bats, which prefer to be out during low-wind nights, Duvall said. The wind farm operators also have created predator-free habitats around Maui for nene and Newell’s shearwaters, and they’re offering to fund a $1.7 million U.S. Geological Survey study on bat habitats, behavior, foraging and other characteristics.

At Monday’s public hearing, Maui resident Cody Nemet Tuivaiti spoke out against the amendment, saying “there’s a lot more work to do.”

Comments on the proposed increase can be sent to glenn.m.metzler@hawaii.gov or mailed to the Division of Forestry and Wildlife, 1151 Punchbowl St., Room 325, Honolulu 96813. Feedback will be sent to the Endangered Species Recovery Committee and the state Board of Land and Natural Resources. The board will make the final decision on whether to allow an increase in the number of incidental deaths.