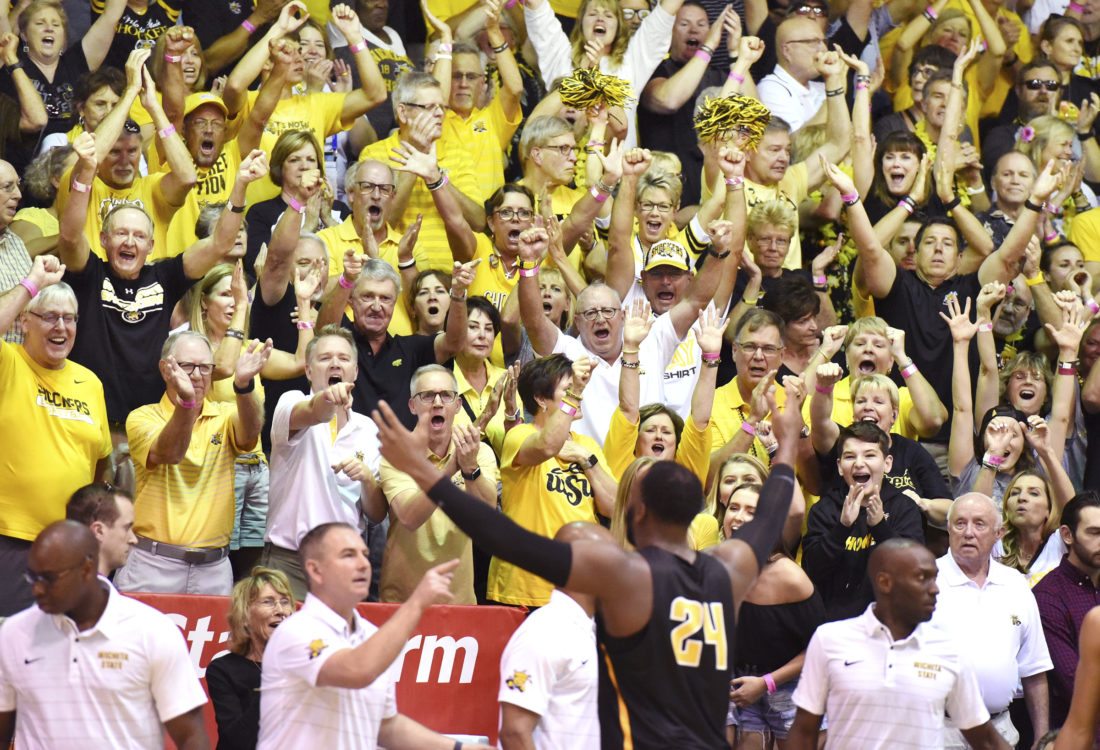 Wichita State basketball fans cheer their team during a win over Cal in this year’s Maui Jim Maui Invitational at the Lahaina Civic Center in November. Boosters who made the trip from states like Kansas, Illinois, Michigan and Indiana helped elevate Maui’s tourism numbers for the month of November. Maui visitor arrivals by air increased 9.3 percent in November to 215,266, compared with the same month last year, according to the Hawai‘i Tourism Authority. • The Maui News MATTHEW THAYER photo

Maui is on the cusp of setting new annual records for visitor arrivals and spending, according to November statistics released Thursday by the Hawai’i Tourism Authority.

For total visitor expenditures, Maui’s visitors spent 2.7 percent more in November than November 2016, tallying $359.4 million, the authority reported, adding that spending was boosted by a 5.8 percent growth in visitor days. For the year to date, Valley Isle visitor expenditures were up 4 percent to nearly $4.3 billion. Last year set a 12-month record for tourist spending on Maui of $4.5 billion, which eclipsed 2015’s $4.1 billion.

The authority’s statistics show Molokai and Lanai not faring as well as Maui.

For visitor spending, Molokai reported a 20.8 percent decline to $2.5 million in November and a 2.1 percent drop to $28.6 million for the year. On Lanai last month, visitors spent 34.5 percent less, $6.3 million, than they did in the same month last year. Year-to-date expenditures on the island were down 12.4 percent to $70 million.

In another measure of visitor expenditures, Lanai topped the state in November in per-person per-day spending at $370.80, but that was 28.8 percent less than a typical visitor spent on the island in November 2016. For the year to date, Lanai’s per person daily spending was down 8.8 percent to $371.8.

Statewide, visitor arrivals were up 7.3 percent to 748,303 in November, compared to a year earlier. For the year through November, the state’s arrivals were up 4.9 percent to 8.5 million. Total visitor expenditures in the state rose 4.5 percent last month to nearly $1.29 billion, and year-to-date spending was up 6.6 percent to $15.1 billion.

Arrivals to the state from Maui County’s bread-and-butter market on the West Coast were up 9.1 percent over the previous year to 322,195 in November, and for the year so far West Coast visitor arrivals are up 4.7 percent to 3.48 million. Arrivals from another key Maui market, Canada, grew 18.4 percent to 51,785 last month, and they were up 10.5 percent to 448,936 for the year.

Total airline seat capacity to the state grew 5 percent to 964,993 seats in November, the authority reported.