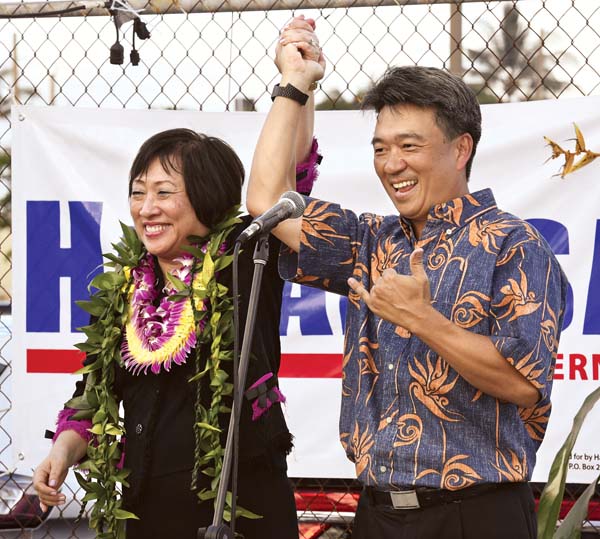 Former Lt. Gov. Shan Tsutsui of Maui raises the hand of U.S. Rep. Colleen Hanabusa after endorsing her for governor during opening ceremonies for her Maui campaign headquarters at the Kahului Shopping Center on Tuesday afternoon. Tsutsui was lieutenant governor for Hanabusa’s opponent in the upcoming August primary, Gov. David Ige. Tsutsui resigned the post in January. The Maui News / MATTHEW THAYER photo

KAHULUI — Former Lt. Gov. Shan Tsutsui raised the arm of U.S. Congresswoman Colleen Hanabusa and declared her the next governor of Hawaii to resounding cheers Tuesday evening outside her new campaign headquarters at the Old Kahului Shopping Center.

Hanabusa is challenging incumbent Gov. David Ige in the Democratic primary on Aug. 11. Tsutsui, a former Senate president from Maui, was Ige’s lieutenant governor before resigning the post in January to join Seattle-based Strategies 360, a public affairs, communications and research firm.

Hanabusa and other supporters for sign waving in the late afternoon along Kaahumanu Avenue before formally endorsing the candidate during the ceremonies opening the headquarters.

“I believe in Colleen’s leadership,” Tsutsui told the crowd. “I’ve had the opportunity to work with Colleen and David side by side for a number of years, and I really am convinced that Colleen is the right person and this is the right time.” 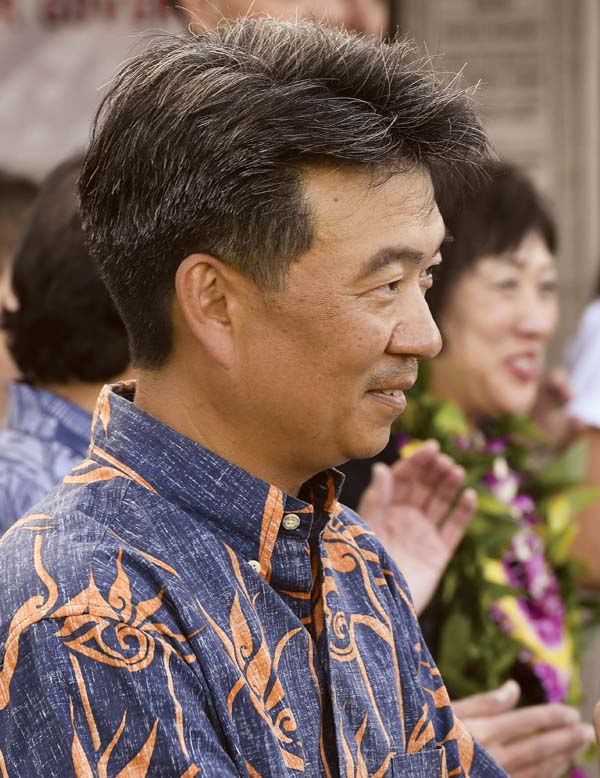 Tsutsui, a Maui High graduate, rose to the second highest post in the state in the wake of the political dominoes created by the death of U.S. Sen. Daniel Inouye on Dec. 17, 2012. Then-Lt. Gov. Brian Schatz was appointed by then-Gov. Neil Abercrombie to fill out Inouye’s term and convinced Tsutsui, who was first in line of succession, to take the post. Abercrombie promised a partnership and to open a Maui office so Tsutsui would not have to spend all of his time on Oahu.

Tsutsui won the post outright in the 2014 election, but the man who convinced him to take the job, Abercrombie, lost to Ige. Tsutsui has been sidelined on many issues, including those involving Maui County, such as the privatization of Maui Memorial Medical Center, during the Ige years.

In an October interview with The Maui News, Tsutsui described his relationship with Ige as “cordial” and explained that he and the governor “have a little bit of different styles, and I respect that.”

On Tuesday, he said that his reason for backing Hanabusa over Ige “really wasn’t about me.”

“I’ve gotten to be up close and personal in terms of a working relationship with both individuals,” he said. “I like David, and I respect him a lot as a person, but I think right now we have to go in a different direction. I believe that Colleen Hanabusa has that ability to lead, to direct and to make tough decisions in a timely manner. I think people expect that from government, and if she’s willing to leave a congressional seat to come home for governor, I think that says a lot. 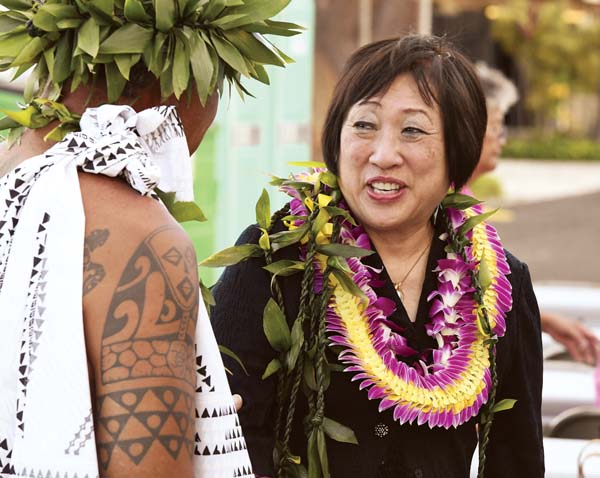 “I’m willing to endorse her and look forward to supporting her from now until the end of the election.”

Hanabusa told supporters she decided to run for governor because of the urging of friends, such as Tsutsui, but also so she could “best serve Hawaii.”

“I’ve listened to everyone, and they said please come home because we need leadership,” she said. “We need direction for this state, and we need the Hawaii we all love.”

If elected governor, Hana-busa said she plans to tackle infrastructure issues in Maui County. Large highway projects in the pipeline, like the Paia bypass, Kihei-Upcountry highway and the next phase of the Lahaina bypass, have been put on hold by the state Department of Transportation, which has focused limited funds on repair and maintenance of state roads.

She cited the Lahaina bypass as something she would immediately address and considered a “major priority.” Lahaina residents have complained that the Olowalu-to-Puamana phase, expected to open next month, will funnel increased traffic to an already congested terminus at Keawe Street, which connects to Honoapiilani Highway.

Residents say that the answer is to complete the bypass to Kaanapali and that current fixes at the Keawe Street terminus will create more safety problems.

“The Lahaina bypass is something . . . that really shouldn’t cost that much more to finish it off, especially when the state loses all these federal funds for not spending the money,” Hanabusa said. “I think it’s clearly something that is necessary for the people.

“That’s something the state should’ve done, and I don’t understand why it wasn’t done.”

Hanabusa also vowed to break the Oahu-centric rule of state government and better serve the Neighbor Islands. She noted that even her rural hometown of Waianae, Oahu, can be left out of the “Honolulu-centric” state government.

“We somehow fail to recognize the uniqueness of each of the islands,” she said. “Maui County has three islands, and they’re all very different. It really is the recognition of people, lifestyles and needs.”

What’s needed is to “put the emphasis” on what is important to the people and how to “make their lives better,” she said.

Tsutsui and Hanabusa both served in the state Senate. Tsutsui said he could not think of any legislator, not counting those elected from Maui County, who has helped the county more than Hanabusa.

He credited her leadership for the new buildings at the University of Hawaii Maui College, allowing the county to appoint its own regional hospital board and confirming 2nd Circuit Court Judge Richard Bissen to the bench.

“It’s that kind of leadership, direction and guidance that she provides that I think is much needed especially here on Maui,” he said.

Since leaving state government, Tsutsui said he has enjoyed his time away from political office and getting his weekends back to spend with his family.

“I think it’s nice,” he said of not having to attend festivals and grand openings every weekend. “Having that cut out of my schedule . . . lets me be at different events for my kids, whether its soccer or projects around the home. I’m really enjoying the time off right now.”

Tsutsui emphasized that he does not plan to return to politics — or a position in Hanabusa’s Cabinet — anytime soon.

“I think there’s some speculation that I might be doing this for a job, but the answer is no,” he said. “If I ever decide to jump into politics it’s going to be locally. I’ve committed eight more years; my youngest daughter is 10, so when she’s 18 and out of the house, then God willing maybe there’s a comeback then.”

Tsutsui will lead campaign efforts on Maui for Hanabusa, who appears to hold the edge over Ige, according to the Honolulu Star-Advertiser poll released Sunday. The congresswoman leads the incumbent by 20 percentage points, 47 to 27 percent, according to the poll. Former state Sen. Clayton Hee has 11 percent with the remaining 15 percent undecided.

Hanabusa said she was encouraged by the polls but reminded supporters to remain vigilant.

“I always tell people the poll that matters is the one on Election Day,” she said. “I think the challenge is to keep people engaged and ensure supporters don’t think ‘Ah, it’s in the bag,’ because it never is. We can’t let our guard down, and we have to keep working hard.”

Former Lt. Gov. Shan Tsutsui of Maui raises the hand of U.S. Rep. Colleen Hanabusa after endorsing her for governor during opening ceremonies for her Maui campaign headquarters at the Kahului Shopping Center on Tuesday afternoon. Tsutsui was lieutenant governor for Hanabusa’s opponent in the upcoming August primary, Gov. David Ige. Tsutsui resigned the post in January. The Maui News / MATTHEW THAYER photo