MPD first to get outfitted with antidote for opioid overdoses

Naloxone nasal spray can save lives 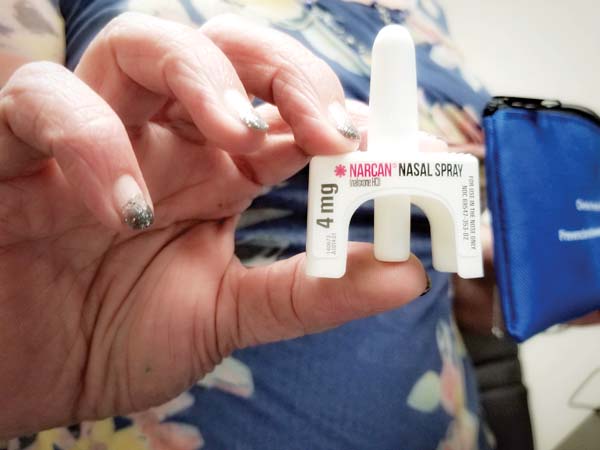 Heather Lusk, executive director of the CHOW Project, shows the Narcan nasal spray now in the hands of Maui police officers. The spray form of naloxone counteracts the life-threatening effects of an opioid overdose. CHOW stands for Community Health Outreach Work, a program funded by the state Department of Health. CHOW Project photo

The Maui Police Department is the first in the state to be equipped and trained to use a nasal spray that reverses the effects of an opioid overdose.

The spray form of naloxone temporarily counteracts the effects of an overdose, namely slowed or stopped breathing, according to the U.S. surgeon general. The medication is a “safe antidote to a suspected overdose, and, when given in time, can save a life.”

Opioids include pain relievers legally obtained by prescription, along with fentanyl, which is described as being 50 to 100 times more powerful than morphine, along with heroin and others.

Through a grant from the state Department of Health, the department was given 200 kits of the spray, or $14,000 worth. Officers received training early this month from Heather Lusk, executive director of the CHOW Project, or Community Health Outreach Work, which is funded by the Health Department.

Maui Police Assistant Chief John Jakubczak said that, although officers do not see many opioid overdoses, it’s good to have such an extra tool available.

“What’s good about it, it’s there in case we need it. You never want to need something after you need it. It’s there,” he said.

“The trend nationwide, they see a lot of use for this ‘Narcan’ sprays.”

(Narcan is a brand name of the nasal spray form of naloxone.)

Lusk said the spray is as easy to use as Flonase, an allergy nasal spray. With just one spray in a nostril, a person usually responds from the naloxone in around 30 seconds, she said. But, within two minutes if there is no response, another spray can be given in the other nostril, she added. The kits are for one-time use.

No one can get high from the spray, she added.

This year, the Legislature passed a bill that authorizes pharmacists to prescribe, dispense and provide education on naloxone types of medication, also known as opioid antagonists, to people at risk of an opioid overdose, their family members and caregivers without the need for a written, approved collaborative agreement.

Jakubczak and Lusk credited Molokai patrol officer Daniel Imakyure for pushing to make the spray available to the department.

Imakyure attended one of her training sessions on Oahu and wanted his department outfitted with the spray, Lusk said.

In fact, according to the surgeon general’s website, naloxone is increasingly being used by police, emergency medical technicians and nonemergency first responders.

Nevertheless, the Hawaii Opioid Initiative, which is focused on the prevention and treatment of opioid and other substance abuse, says Hawaii should be proactive. In July 2017, Gov. David Ige tasked the Health Department to coordinate the initiative.

From 2013 to 2016 in Maui County, there were 79 drug overdose deaths. Those deaths include all drugs, Lusk said, citing Health Department statistics.

Lusk couldn’t recall specifics, but she remembered that Maui topped the state in drug overdose deaths in a past year.

But, overall, drug poisonings in general were the “leading mechanisms of fatal injuries” for Hawaii residents, measured in five-year periods from 2007 to 2011 and then again from 2012 to 2016, according to the Health Department.

Kauai has received training for the naloxone spray, although does not yet have its officers supplied with it, Lusk said.

She was unsure of the status of other departments in the state.