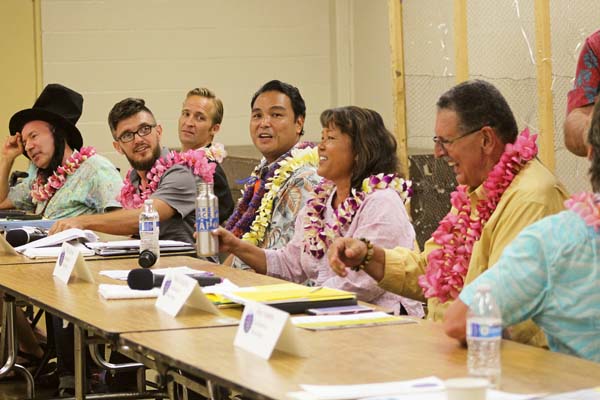 LAHAINA — Candidates for the open West Maui County Council residency seat said they wanted to see a better public transportation system for West Maui, more efforts on the part of hotels to provide housing and transportation for workers and solutions to coastal erosion that didn’t involve seawalls.

The candidates spoke during and after a forum held by the West Maui Taxpayers Association on Wednesday night. Upwards of 100 people came to the Lahaina Civic Center to hear from candidates for West Maui’s state Legislature seats, the mayoral race and the West Maui County Council residency seat.

The council candidates — Kanamu Balinbin, Rick Nava and Tamara Paltin — are all longtime West Maui residents who’ve been involved in the community.

Balinbin owns a catering business and has provided food for high school functions and surf events.

Nava owns a photography and video production company and has been the president of both the West Maui Taxpayers Association and the Lahaina Rotary Club. 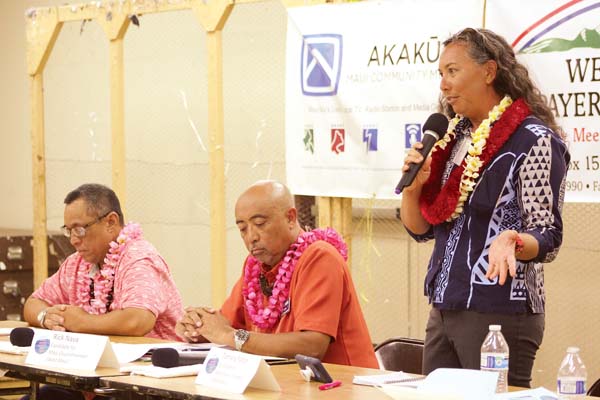 Tamara Paltin (from right), who is seeking the West Maui council residency seat, describes her platform alongside opponents Rick Nava and Kanamu Balinbin during a candidate forum Wednesday night at the Lahaina Civic Center. The forum, hosted by the West Maui Taxpayers Association, also invited candidates in the West Maui state Legislature races and the mayoral race.

Paltin has been an ocean safety officer at D.T. Fleming beach for about 17 years and is also the president of the Save Honolua Coalition and the West Maui Preservation Association.

All three candidates spoke about the need for affordable housing, particularly for West Maui workers who have to commute daily from Central Maui to their jobs at the resorts. Balinbin recalled that former Mayor Elmer Cravalho used to emphasize that hotels needed to build housing for their workers. Balinbin said hotels have done that in the past, and he wanted to see it continue.

“There’s no reason the hotels cannot give in,” he said. “If they really say they care about their workers, they need to put into this housing crisis that we have over here. Too many people I’ve seen have to move to the Mainland or move to Wailuku.”

Nava said that “we need to really figure out where is the bottleneck with all these approvals” for housing projects that have come before the council and stalled. He also added that there’s a lot of duplication in the permitting process that he wants to cut down on, and that he wants to see the county help homebuilders with infrastructure.

“There’s a lot of things that I feel the county can do to help mitigate some of these expenses,” he said. “Because these expenses that we’re asking the developer to put down, it’s going to go back to the homebuyer anyway. But if the county puts money into all this, they’re going to get their money back from property taxes.”

Paltin also thought the county could help out affordable housing developers by providing low-interest loans “for their off-site infrastructure and/or on-site construction.” She also wanted to see the county help more organizations like Na Hale O Maui, which keeps homes affordable in perpetuity by holding the land in a trust and selling homes to owners. She envisioned the county identifying ideal housing parcels and, if it’s privately owned, sitting down with landowners to see “what can we do to work it out? . . . What are they willing to give up this land for?”

The candidates also touched on the issue of transportation. Nava said he wanted to see more late-night hourly stops, possibly through midnight, to transport employees who work late shifts at hotels.

“People come to work, but they have to find their way home,” he said.

Nava mused about creating an agreement with the Maui Ocean Center “where people could park their car and that would be the drop-off point, so that people from Kihei and Wailuku, Central Maui, they could all go there and stop that flow to the pali all the way through.”

Balinbin thought that because much of the traffic was due to the hotels, they should “play a bigger role” in easing transportation needs.

“For me, we have to find a solution of a better public transit system,” he said. “The hotels need to provide a better bus system for their workers. . . . The county should help with the transition.”

Paltin pointed out that newer properties have to commit to being part of the county’s traffic plan and suggested approaching the older hotels to also get on board with providing shuttles for workers and tourists, which would ease traffic and parking issues.

“If we can try and move the tourists away from the rental cars, then I think we’ll all have a better experience,” she said.

Paltin acknowledged that this strategy could impact the money the county gets from rental cars via a new state law, but that “we haven’t gotten the money yet, so let’s see how that pans out. . . . I’m not saying don’t rent the cars, but once they get to their destination . . . think of shuttles from the hotel to the activities.”

The candidates also talked about bringing more money back into West Maui for roads and housing. Balinbin credited the state Legislature for setting aside $570 million for affordable rentals, which is expected to create 25,000 more homes by 2030.

“West Maui being the tax moneymaker that we are, we should be getting more of that money,” Balinbin said. “We bring so much money to the state. We need to work better with our state Legislature.”

Paltin said that even though West Maui and the county as a whole does not get its share of the transient accommodations tax back from the state — a longtime gripe of the counties — one way the state could make up for it is to put more TAT funds into roads and facilities impacted by tourism.

“If they’re not going to give us back our fair portion of the TAT, take that money and invest it into the state infrastructure that is heavily used by the tourists, because it was proposed to mitigate the impacts of tourism,” she said.

When asked if she thought the state does enough of that now, Paltin said, “not to the extent that they should given what our tourist economy of West Maui brings into the pot.”

Nava said he’s “torn” on the issue. He didn’t want to make it “the county against the the state, so then the state could come back to us and be like, ‘OK, yeah, I’ll give you more TAT, but the next time something happens with your roads, you take care of it.’ “ He said if the county asks for more of its share, it should at least have a clear plan for where the additional funds would go, such as to local schools.

Candidates were allowed to ask each other questions during the forum, which evolved into a show of political rivalries rather than a debate of core issues.

Balinbin confronted Nava and got in his face afterwards for reversing his decision to run for office and said that “man to man, I would’ve really, really appreciated” a call before Nava declared his candidacy.

Mayoral candidates Elle Cochran and Mike Victorino questioned each other’s donors in a tense exchange in which Victorino told Cochran “you wait till I finish” after she complained that he wasn’t answering the question.

Terez Amato, a Democratic candidate for the West and South Maui Senate District 6 seat, criticized incumbent Sen. Roz Baker’s “anti-resident, pro-lobbyist votes,” donations from biotech companies and her involvement in the recently passed Senate Bill 3095 — now Act 45 — that prevents the use of pesticides but “only 100 feet from children’s schools,” Amato complained.

Baker responded that it was “unfortunate that my opponent continues to lie about my voting record and makes an unfair and untrue comparison between the fact that there have been people donating to my campaign, and that somehow makes any of my votes tainted.”

Tamara Paltin (from right), who is seeking the West Maui council residency seat, describes her platform alongside opponents Rick Nava and Kanamu Balinbin during a candidate forum Wednesday night at the Lahaina Civic Center. The forum, hosted by the West Maui Taxpayers Association, also invited candidates in the West Maui state Legislature races and the mayoral race.

Field umpire Jaime Perez talks to Maui High School’s Mikito Barkman in between pitches during a Maui Interscholastic League game in April. The MIL is experiencing a “critical low” of officials in all sports, and the league is attempting to address the problem with the inaugural Officials and Coaches Symposium at the Baldwin lecture hall on Saturday. The Maui News / CHRIS SUGIDONO photos

Home plate umpire Paul Silva talks to a Maui High coach in between innings during a game in April.