Facility is a part of Larry Ellison’s indoor agricultural venture 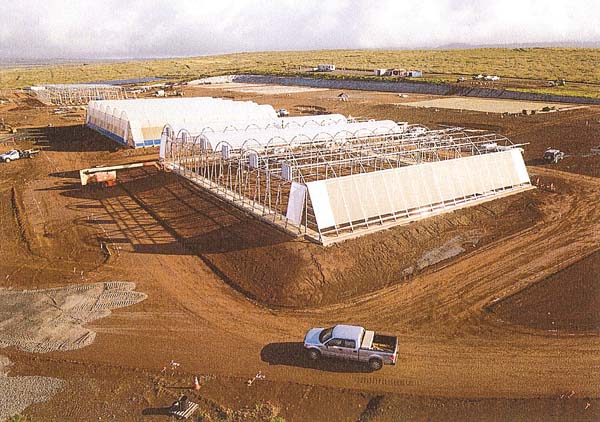 A hydroponic kitchen that would host cooking demonstrations, hands-on teaching and school groups is being planned as part of Larry Ellison’s high-tech indoor agricultural facility expected to open by the end of this year on Lanai.

Lanai Resorts LLC, which does businesses as Pulama Lana’i, is applying for a special use permit for the $300,000 kitchen planned for a 20-acre site about 2.3 miles southwest of Lanai City. The kitchen installation is expected to take about one month.

The Lanai Planning Commission will hold a public hearing on the project at 5 p.m. Oct. 17 at the Lanai Senior Center.

The kitchen is another feature in Ellison’s $75 million hydroponic venture with plans to grow vegetables for sale cheaper than imported produce. 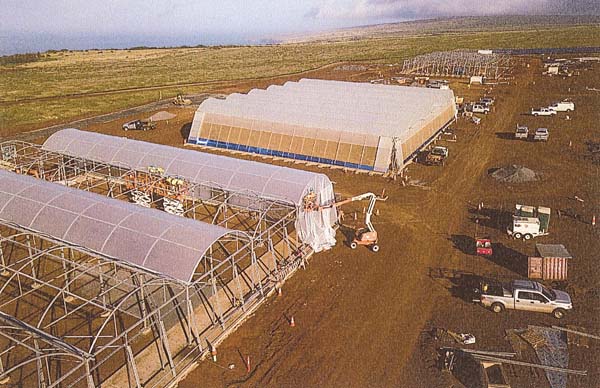 Ten greenhouses (pictured) and a Headhouse are being constructed for the new hydroponic farm, which will include a $300,000 kitchen for cooking demonstrations and hands-on teaching.

The kitchen would be installed in a “Headhouse” at the agricultural facility, where cooking demonstrations and meal preparations would be conducted using produce from 10 greenhouse structures, according to the company’s permit application submitted in April to the county. The greenhouses and a photovoltaic farm — which will power the facility and kitchen — are under development.

The Headhouse will serve as the central operations building for the facility, encompassing reception, office, laboratory, cold storage and packing uses. Plans also call for a multifunction space within the Headhouse and added parking for dining operations.

“The development of Four Seasons Resorts has resulted in the island becoming one of the foremost luxury resort destinations in the world,” Lanai Resorts’ application reads. “Because of this, there is a need to provide ancillary services and activities on the island, including agro-tourism activities.

“The Lanai Hydroponics facility is intended to be one such activity that would be offered to visitors and residents alike, thus supporting the island’s visitor-based economy.”

Features of the kitchen include:

• An educational space offering cooking and nutrition classes highlighting the facility’s produce and introduction “eat what you cook” concepts.

• A preparation space for meals for guests interested in learning about hydroponic farming, featuring the technology and the produce.

• A preparation space for the research and development of value-added products and other processing methodologies.

Kitchen hours would mirror the hydroponics facility from 8 a.m. to 5 p.m. daily. During special events, the kitchen may operate until 10 p.m.

Lanai Resorts does not expect to hire any staff for the kitchen and will rely on outside partners for functions, though the overall hydroponics facility will have 15 to 20 full-time employees, according to its application. The kitchen will support existing farmers by allowing co-development of value-added products and opportunities for the showcase of other Lanai-based agricultural products.

The kitchen will have space for 20 guests and be open to those touring the hydroponics facility, special group events and tours by Four Seasons Resorts Lanai and school groups. All staff will be trained and knowledgeable about hydroponics farming and its benefits, as well as the types of produce being cultivated. Employees also will receive training in specific areas relating to the nature of the operation.

As a test kitchen, chefs from around the state will be invited to collaborate and create various recipes using the facility’s products. Guides to using the produce also may be integrated into health and cooking curricula and agricultural marketing for farmers statewide.

Sensei, an agricultural tech startup, will operate the hydroponic facility. The Los Angeles-based business was launched earlier this year by Ellison and Dr. David Agus, a professor of medicine and engineering at the University of Southern California Keck School of Medicine and Viterbi School of Engineering.

The Lanai facility is Sensei’s first farm operation and would involve automated, computer-led hydroponic farming in large $15 million greenhouses, Ellison said in an interview with the Honolulu Star-Advertiser last year.

Director of Marketing Jennie Wachtmeister said in an email last week that the company is not sharing much information on the project, but it may provide more details later this year.

“The Lanai Hydroponics operation is a focal point for agricultural revitalization for not only Lanai, but also for the state in general,” Lanai Resorts’ special use permit application reads. “The space must be flexible enough to accommodate all possible uses for the food given the limited infrastructure on island.

“In order to showcase the technology and product line and generate interest in the community, Sensei Farms, operator of the facility, plans to integrate community education initiatives that have relevance within the business model, such as Farm-to-School. The kitchen will be equipped to provide meals for students upon visits and extend the curricula beyond conceptual and into practical application through demonstrations and on-site classes.

“Thus, the inclusion of the kitchen rounds out the educational experience from farm to table.”