From a desk job to fire captain

A trailblazing woman takes charge among a band of firefighting brothers 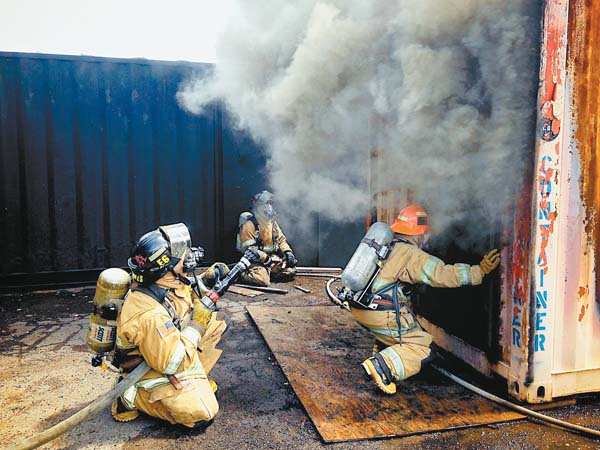 Lani Gomes wasn’t planning to be a trailblazer when she left her desk job to become a firefighter in 2001.

She said she knew that she wanted “to be active in the community and do a job that was physical, and then that position seemed to be the best fit.”

In October, after 17 years on the job, Gomes was promoted to captain of the Training Bureau, earning the distinction as the Maui Fire Department’s second-ever female fire captain, after Kris Williams in the 1990s, said Fire Services Chief Rylan Yatsushiro.

Williams was promoted to captain in 1991. She became a firefighter in 1981, worked in the Wailuku and Paia fire stations before being promoted to Firefighter III in 1989 and assigned to the Lanai Fire Station. She retired in 2000.

Gomes is one of just three female uniformed firefighters in the department, which may not be surprising. In 2016, just 4.5 percent of firefighters in the U.S. were women, according to the U.S. Department of Labor. They also earn less overall — a $51,926 median annual salary compared to a $68,680 median wage for men. 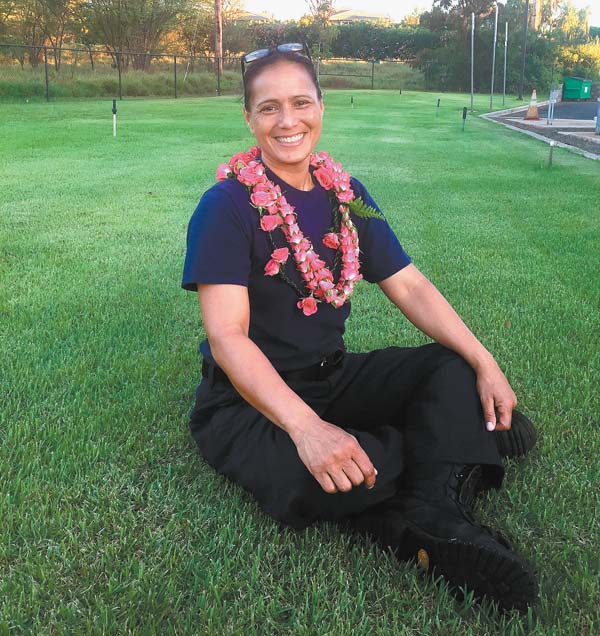 Lani Gomes spends her last day at the Wailea Fire Station in September, shortly before her promotion from firefighter III to fire captain.

Gomes, the youngest of three children, said she’s used to competing with the boys.

“I think growing up with guys, with my brothers, made it an easy transition going in,” she said.

And, Gomes pointed out, she has a long legacy of strong, influential women in Maui County to follow, like Olympian paddler Lauren Spalding, former Gov. Linda Lingle, former Mayor Charmaine Tavares and even as far back as Queen Ka’ahumanu.

Born and raised on Maui, Gomes has long had a passion for giving back to the community. Her father, Robert, sold welding equipment, and her mother, Mary Ann, worked at various school cafeterias, eventually retiring at Waihee Elementary School. Gomes grew up with two older brothers — Robert Jr. and Herbert — whom she credits with her competitive spirit.

“I remember as a kid, my mom was trying to put me in hula, and I wanted to play baseball with my brothers,” Gomes said. “So I think that’s how I got competitive too, because I was always trying to reach up to their level, and (show that) they don’t have to watch out for me because I can take care of myself.” 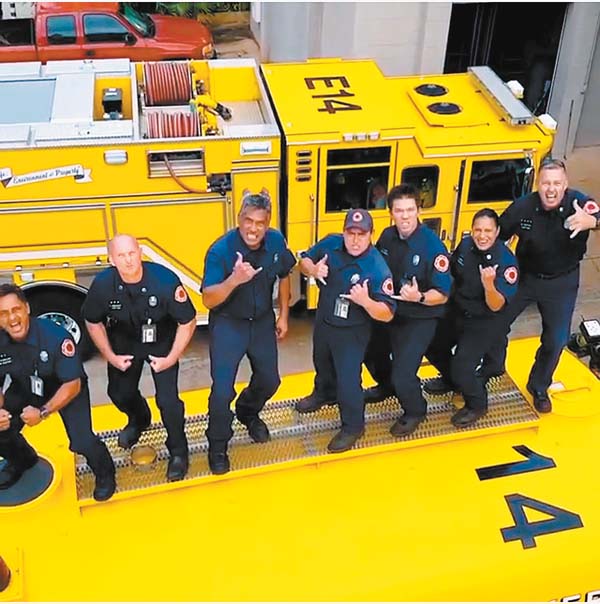 Lani Gomes (second from right) and the Wailea fire crew pose for a photo in 2017 as part of the #TruckerToughChallenge, a social media campaign to encourage 3-year-old Maui boy Trucker Dukes in his fight against cancer.

Gomes played soccer and swam at St. Anthony School, graduating in 1989 and going on to study at Loyola Marymount University. After graduating in 1993, Gomes hopped between office jobs, spending two years with the Internal Revenue Service before moving on to do tax returns for Russell Yamane & Associates CPAs on Maui. She eventually landed a job with Maui United Way, where she felt she could help the community. But that too involved a lot of office work. So, she started considering a change in career.

“Just talking to people, it felt like the Fire Department was for me,” Gomes said.

While going from a desk job to the front lines of emergency response may have seemed like a big transition, Gomes had always stayed physically active, paddling and playing in local soccer leagues, and she welcomed the challenge. She passed the entrance test and was officially hired in March 2001.

Gomes said she was just entering the department when Williams was retiring. Williams gave her a call to talk story, and told Gomes to let her know if she needed anything. After Williams’ departure, Gomes said, she and Valerie Brandon were the only female firefighters she could recall in the department at the time.

When asked if she ever felt like “the odd woman out,” Gomes said, “yes and no.” In the eyes of the public, yes. But at the fire station, it was like being back home with her brothers. She spoke their language, and many were fellow St. Anthony alums. Early on, Gomes was assigned to the Hana station, and she said one of her earliest memories was how warm and welcoming the senior firefighter was.

“I’ve been really grateful because a lot of the men in the Fire Department, like all people, they want to share their knowledge, and a lot of them shared with me their ways or how they adjust in situations,” Gomes said. “A lot of the fire guys, they have their unique specialties, like some of them are sailors, some of them are chefs, some of them worked in construction or carpentry. So we have a huge supply of specialized personnel that are in that general category of firefighters.”

Gomes knew that most of the calls she would respond to as a firefighter would be for medical emergencies. So, she got her emergency medical technician license in 2002. For five years, she juggled shifts on the ambulance with her time at the fire station.

“Now that I think about it, it’s kind of crazy,” Gomes said. “At the time it was like, I was younger and I wanted to learn. Everything was new. Both of the careers were complementing each other because I knew what fire would do on a medical call.”

Gomes has been stationed throughout the island during her career, from Hana to Kihei, Wailea, Kahului and Lahaina. Perhaps the most intense fire she’s responded to her in 17 years was the 2,000-acre fire in Lahaina in August that burned many homes in Kauaula Valley and forced evacuations throughout West Maui.

“Coming up on it, the whole town was lit up, just that red glow and the smoke,” Gomes said. “When you’re driving through it, sometimes you couldn’t see like 25 yards in front of you.”

Gomes remembers the “mass sea of people trying to evacuate,” the constant life checks on fellow crew members and the roar of the wind and flames that sounded like ocean waves crashing over rocks and sweeping back out to sea.

“It was a situation that I’ve never seen before,” Gomes said. “I still haven’t processed the whole thing.”

As captain, Gomes is now tasked with organizing training for the department and coordinating with other agencies. She said she will miss the more hands-on emergency calls and that the promotion was “bittersweet in a way, because I knew it’s taking on more responsibility.”

However, it’s something she’s been working toward for years, and Gomes counts herself grateful and lucky to be where she is today.

Lani Gomes (second from right) and the Wailea fire crew pose for a photo in 2017 as part of the #TruckerToughChallenge, a social media campaign to encourage 3-year-old Maui boy Trucker Dukes in his fight against cancer.

Lani Gomes spends her last day at the Wailea Fire Station in September, shortly before her promotion from firefighter III to fire captain.

A bronze statue of Maui-born Patsy Mink was dedicated Thursday at the Hawaii State Public Library on Oahu. State Foundation on Culture and the Arts photo