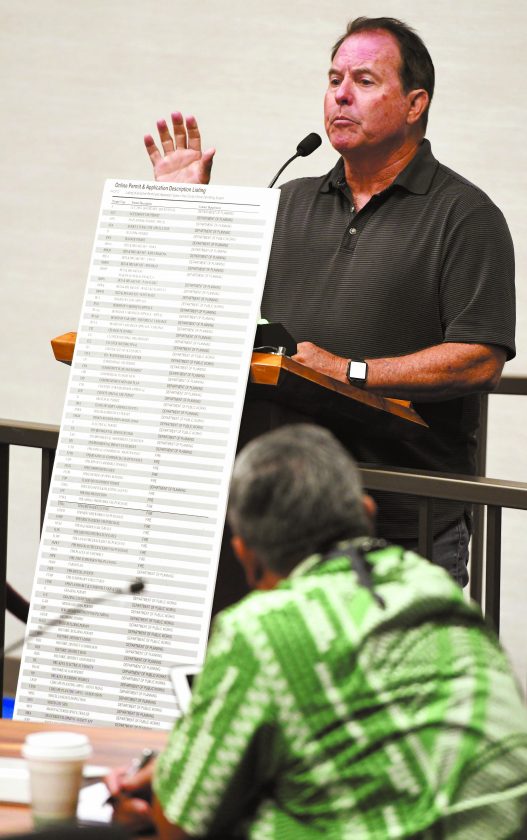 Tom Cook testifies in support of Michelle McLean with his enlarged list of building permits approved during her tenure propped against the podium Wednesday in Council Chambers. McLean was picked by Mayor Michael Victorino to serve as planning director and her nomination requires council approval. The Maui News / MATTHEW THAYER photos

WAILUKU — A County Council committee recommended approval of Karla Peters and Marc Takamori as directors of the departments of Parks and Recreation and Transportation, respectively on Wednesday evening, following a daylong meeting that drew more than 70 testifiers.

The council Governance, Ethics, and Transparency Committee, chaired by Mike Molina, began vetting Mayor Michael Victorino’s department heads and his managing director Wednesday morning. Under a charter change, the council has the opportunity to confirm 11 department directors nominated by the mayor.

The committee took public testimony for seven hours, then questioned and voted on the Peters and Takamori nominations for another hour and a half. With the council ranks dwindling as the day wore on, Peters was recommended for approval, 7-0, with council members Tasha Kama and Tamara Paltin excused. Later, Takamori was recommended for approval, 5-0, with members, Kama, Paltin, Kelly King and Riki Hokama excused.

Their nominations now move to the full council for approval.

The meeting was recessed at 7:30 p.m. It will be reconvening at 3 p.m. next Wednesday. 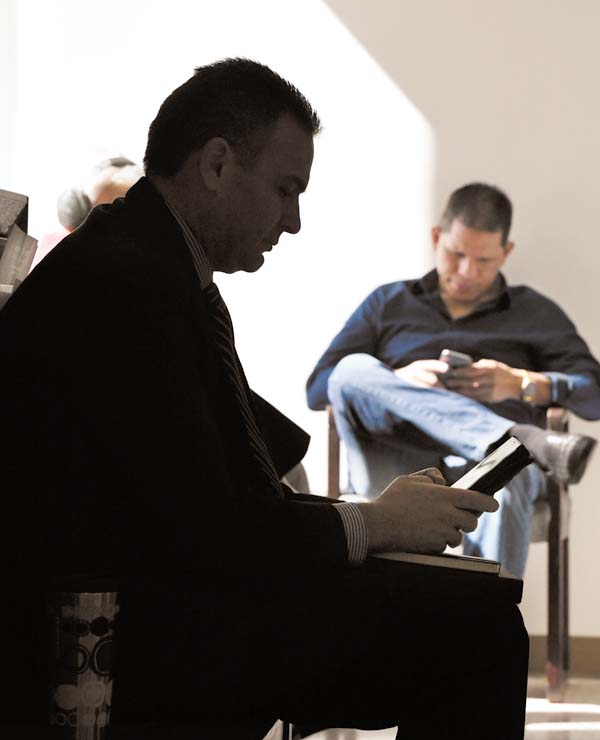 While testifiers gave their opinions of Cabinet nominees in Council Chambers on Wednesday, many of the nominees listened outside. Sandy Baz (foreground) has been nominated to serve as managing director; he requires the confirmation of the council. Former Environmental Management Director Stewart Stant is in the background, working his phone.

This is the first time that a full slate of 11 mayor-appointed department heads will be up for council approval. In the past, only the corporation counsel, prosecuting attorney and director of water supply required council confirmation, according to David Raatz, supervising legislative attorney for the Office of Council Services.

In 2016, voters approved a charter amendment that outlined qualifications for department heads and called for council confirmation for department directors appointed by the mayor.

Since then, the council confirmed the nominations of new directors of Finance, Planning and Housing and Human Concerns departments when then-Mayor Alan Arakawa filled those vacancies during his term, Raatz said.

The council has until March 9 or 60 days from when Victorino submitted his appointments to the council to make a decision. If no decision is made, the appointments are confirmed, said the committee’s Vice Chairwoman Keani Rawlins-Fernandez during the meeting. 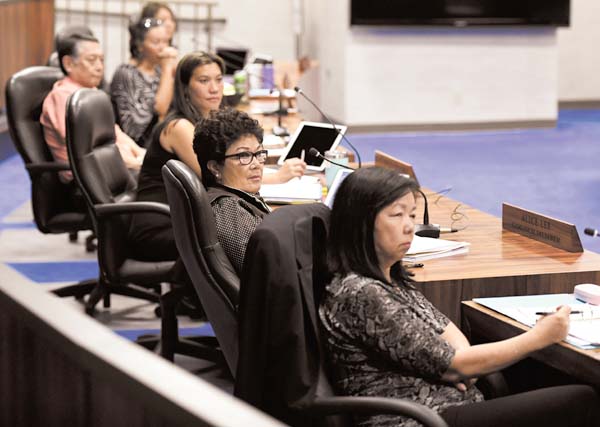 The two department head nominations generating the majority of testimony at the meeting were Wong and McLean. While their nominations faced some opposition, most of the testimony was favorable to them.

Maui attorneys and co-workers offered support for Wong, saying he is an experienced litigator who has mentored younger attorneys and has an “open door” policy for his workers.

Even one of his subordinates, who ended her friendship with him for three years because Wong represented her ex-husband in a divorce proceeding, threw her support behind Wong.

Deputy Corporation Counsel Moana Lutey said, “No one was more critical of Pat than me.” So when Wong became her boss, she scrutinized him so much it was “pretty much abusive.”

But she watched as Wong helped her save the county “hundreds of thousands of dollars” while accompanying her to a case in federal court on Oahu. 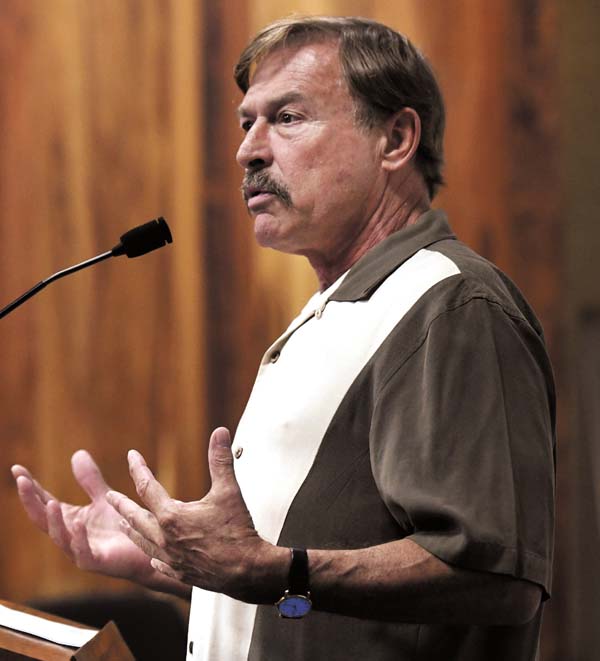 Wailuku attorney David Jorgensen, who has known Wong for years, said: “He is a man of his word. He works hard. He knows the law. He’s someone you can talk to. But he is firm in his convictions. If he believes he’s right, you have a fight on your hands.”

He also knows when to work out settlements, he added.

Nick Drance opposed Wong’s confirmation, citing a lawsuit on appeal involving two time shares that he says could cost the county “hundreds of millions of dollars.” The financial consequences could be devastating and could hurt the county’s bond rating, according to Drance.

“I believe Mr. Wong functions in a very involved way in county affairs that extend far beyond the legal (subjects), an example of why he’s inappropriate in this position,” said Drance, who is part of the Maui Miracle organization, which brought the court issue to the media prior to the past general election. 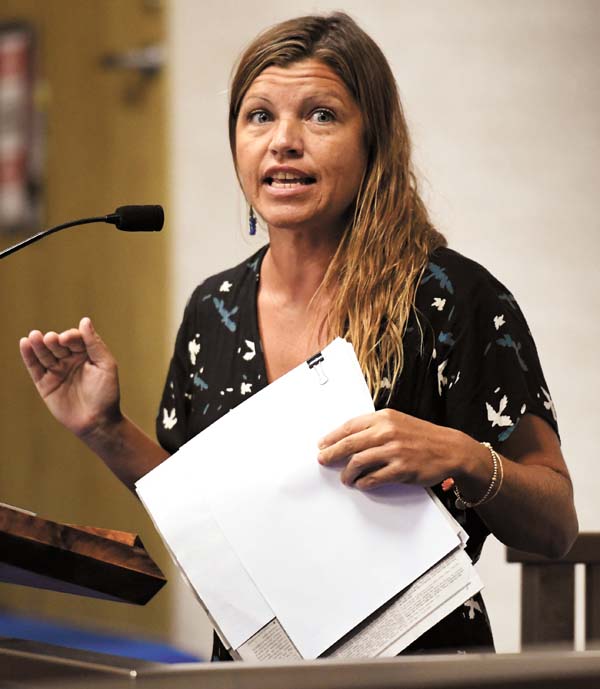 Autumn Ness, who served as an executive assistant to former Council Member Elle Cochran, also spoke against Wong’s confirmation. She said he seemed to advocate for corporations, such as Alexander & Baldwin.

Cochran took issue with A&B over a restrictive qualification process for its Kamalani affordable housing project in Kihei in 2016. She said Wong put up roadblocks to legislation Cochran sought to introduce, cautioning that there could be lawsuits.

Community leaders, co-workers, officials in the construction industry — and even those who had their permits denied by the Planning Department — offered support for McLean’s appointment. They told the committee that she is competent, open, experienced and cares for the island.

Francine Aarona, also known as “Aunty Mopsy,” said she’s an “activist at heart” but supports McLean’s appointment. The director has shown up at numerous community meetings and has been informative, especially in the area of short-term rentals and how they relate to the community plan.

“She is trustworthy and fair in her recommendations that are presented,” said Aarona, who is also part of the group Protect Paia.

Wayne Muraoka, vice president of Armstrong Development, said that in no way are his plans “rubber stamped and passed through quickly” by the Planning Department — as some opposed to McLean’s nomination have claimed.

Even though he may not see eye to eye with the department on what projects are good for Maui County, Muraoka said McLean is fair and has made suggestions to improve projects.

“The projects end up better for Maui,” he said.

McLean and Wong faced opposition from a handful of Haiku residents upset over the county’s settlement in December that allowed Northshore Zipline to continue to operate in Haiku.

They asked that the confirmations of Wong and McLean be deferred. They wanted time to consult with them about how the settlement came about.

The zip line’s neighbors have had issues with the company over noise and privacy issues and whether a zip line is a permitted use on agricultural lands.

In its settlement, the county said that the zip line was a permitted use in part because it preserved and rehabilitated the World War II Camp Maui historic site.

Residents said they were blindsided by the settlement and felt the county was not transparent. Some residents have taken their dispute to the county Board of Variances and Appeals.

Those testifying did not ask for rejection of the appointees but voiced disappointment over their actions. Haiku resident Marian Prosser said that she was told by Wong and McLean that they got “their back, we got this one” and instead settled and allowed the zip line to continue to operate.

GIL KEITH-AGARAN – Counties would get only $7 million more

While testifiers gave their opinions of Cabinet nominees in Council Chambers on Wednesday, many of the nominees listened outside. Sandy Baz (foreground) has been nominated to serve as managing director; he requires the confirmation of the council. Former Environmental Management Director Stewart Stant is in the background, working his phone.

Tom Cook testifies in support of Michelle McLean with his enlarged list of building permits approved during her tenure propped against the podium Wednesday in Council Chambers. McLean was picked by Mayor Michael Victorino to serve as planning director and her nomination requires council approval. The Maui News / MATTHEW THAYER photos