Haleakala Ranch seeks to have nene 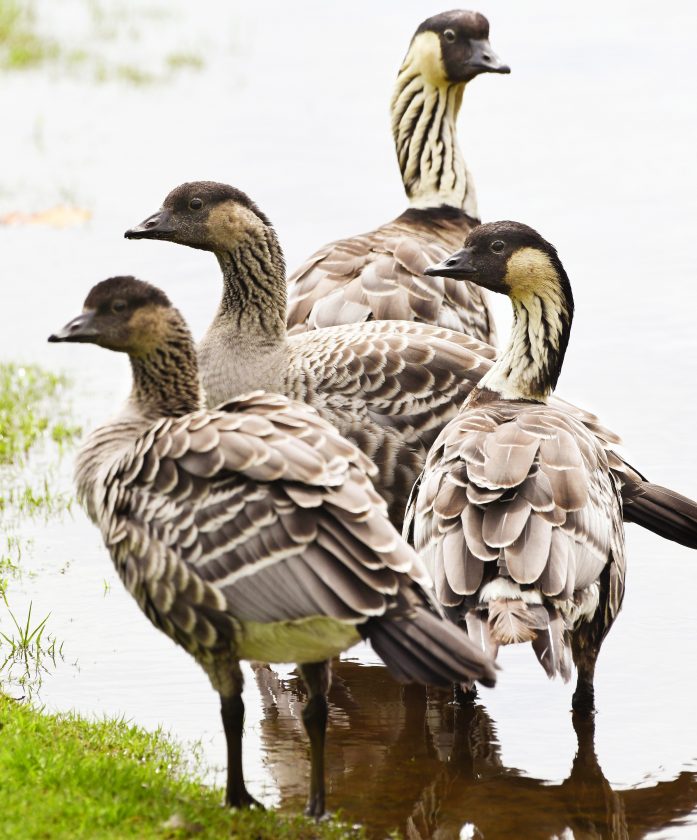 A pair of nene fledglings (left) forage with their parents along the shore of a pond fronting King Kamehameha Golf Club’s 18th green Friday in Waikapu. Haleakala Ranch is seeking a Safe Harbor Agreement to set up a nene release pen to allow for breeding and protection from predators. The Maui News MATTHEW THAYER photo

Haleakala Ranch is applying for a permit to aid the recovery of the endangered nene on more than 3,000 acres of ranchland.

The Safe Harbor Agreement among the ranch, state Department of Land and Natural Resources and the U.S. Fish and Wildlife Service would include nene habitat improvement and maintenance, a summary of the request said. The measures include building a nene release pen and predator control.

The agreement would expand the range of the nene, restore the Hawaiian goose to an area it once roamed and increase the population, “thus contributing to its overall recovery,” the summary said.

“Thanks to dedicated partnerships between private landowners, conservation groups, and the State of Hawaii Department of Land and Natural Resources, the nene are moving forward on the road to recovery,” said Katherine Mullett, acting field supervisor for the service’s Pacific Islands Fish and Wildlife Office. “Safe Harbor Agreements support private landowners’ ability to manage their lands and make improvements in a way that contributes to the recovery of endangered species.”

The draft Safe Harbor Agreement currently is open for public comment through March 21.

The nene disappeared from Maui probably at the end of the 19th century, the draft agreement said. They were reintroduced to Haleakala National Park in 1962. Other nene introduction programs also have been established at Hanaula in West Maui and at Piiholo Ranch in a Safe Harbor Agreement in 2004.

The goal of the Haleakala project would be the establishment of a breeding population of 200 nene on 3,056 acres of ranchland, which currently is used for cattle ranching, the draft report said. A nene release pen with access to water would be built as well as necessary roads for access. DLNR would be allowed to release nene in the pen and to perform predator control.

The conservation measures are proposed for 10 years with Haleakala Ranch allowed to terminate the Safe Harbor Agreement in five years “for reasons beyond their control” and to return the land to its original use, the draft agreement says.

The Safe Harbor Agreement is proposed for 50 years, which would allow the ranch to extend the conservation measures and delay the return of the land to ranching.

Without this agreement, it is not likely the nene would inhabit the ranchlands, the draft agreement said.

The ranch would notify the DLNR and U.S. Wildlife Service in advance of activities that may impact the nene and would notify the agencies of any dead, injured or sick nene, the draft agreement said.

To request more information, to obtain copies of documents or to submit written comments, there are several methods:

• Internet, documents may be viewed at www.fws.gov/ pacificislands.

• Email comments to pifwo_admin@fws.gov. Include “Safe Harbor Agreement for Nene at Haleakala Ranch” in the subject line of the message.

Those commenting on the draft agreement should include a name and return address and refer to “Safe Harbor Agreement for Nene at Haleakala Ranch.”