Over the past century, there’s been a fourfold increase in the annual amount of acreage burned in Hawaii 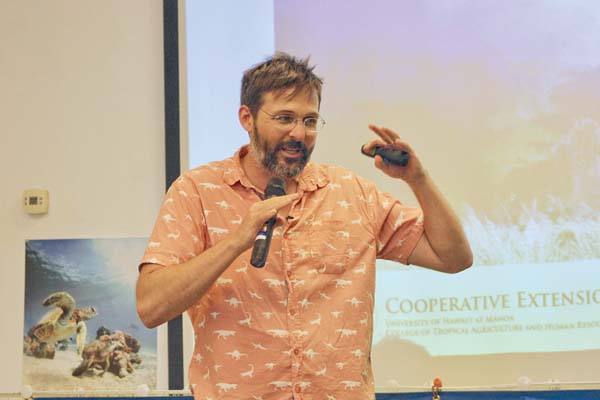 MAALAEA — In 1901, a massive 30,000-acre fire burned on Hawaii island’s Hamakua coast for three months — big enough to draw attention from the U.S. Bureau of Forestry, which came to the island to investigate.

The problem, reported Edward Griffiths of the Forestry Bureau, “is conserving water supply, which depends on the preservation of existing forests and restocking some of the denuded slopes.”

What Griffiths knew 100 years ago is what fire experts are saying today, said Clay Trauernicht, wildland fire specialist with the University of Hawaii at Manoa. When it comes to preventing fires, restoring forests and controlling the type of vegetation that grows are crucial.

Trauernicht spoke on the history and changing threat of wildfires during a presentation last week hosted by the Maui Nui Marine Resource Council.

“One thing that distinguishes Hawaii and other islands is the fact that every time we get a fire, you’re a stone’s throw away from coral reef systems,” he said. “This is a problem they don’t have on the Mainland.” 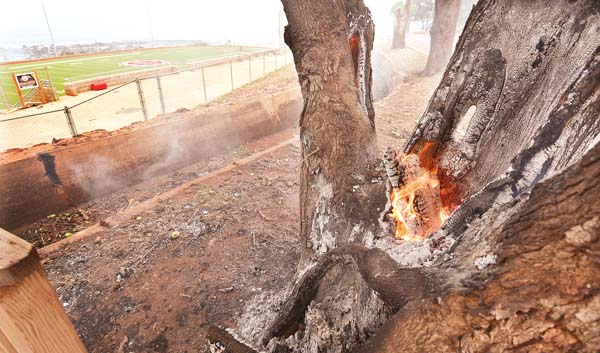 Over the past century, there’s been a fourfold increase in the annual amount of acreage burned in Hawaii, with the state averaging about 20,000 acres a year over the past decade, Trauernicht said.

The causes of most fires are unknown. Out of 12,000 recorded incidents statewide from 2000 to 2011, only 882, or about 7 percent, had a determined cause. Of those, 72 percent were accidental, which also means they’re preventable, Trauernicht said at Wednesday’s meeting in the Pacific Whale Foundation’s classrooms in Maalaea. That’s why part of the solution is public education on the risks of fire and how to avoid sparking a fire.

“We can really only do two things,” Trauernicht explained. “We can target ignitions . . . and the only thing we have direct control over is the vegetation.”

Trauernicht is aware that there has been concern over the possibility that Maui Electric Co. equipment caused the fires in Lahaina in August. While fire investigators could find no specific cause, they also could not rule out power lines. Trauernicht said it’s something to think about, given that last week, Pacific Gas & Electric Corp. filed for bankruptcy as it faced liability for devastating wildfires in California. But, he added, the conditions are such that if it wasn’t MECO, it would’ve been something else.

MECO said that it has “a working group conducting a wildfire risk assessment over the next several months, identifying priorities and mitigation options.”

“Among the things we’re looking at is under what conditions we would consider cutting power,” MECO spokesperson Sayble Bissen said. “Keep in mind that’s not a perfect solution — there are many sources of ignition for wildfires, and disrupting power to thousands of customers carries its own safety risks.

Bissen added that MECO has “an extensive vegetation management program and spent $2.8 million to clear and control brush, trees and branches around our equipment.” Bissen said MECO also regularly inspects substations and areas around transmission lines, and works with the West Maui Wildfire Task Force on maintaining firebreaks and fuel mitigation projects in West Maui.

Trauernicht also addressed concerns about county firefighters and taxpayer dollars going toward fires in former farm and grazing lands managed by big landowners. One resident wanted to know what could be done about that.

“I don’t know what’s going to be done, but that’s what’s happening,” Trauernicht said. “I think that it’s conversations to have with the landowner. Like I said, it’s sort of this unprecedented burn. It’s not only the fuels, but when these were active ag lands, the guys were up there working. They had water trucks, they had gates, roads well maintained.”

In the post-plantation era, he said, “the burden that’s now placed on the shoulders of firefighters is really unprecedented.”

Fires have increased since the decline of large-scale agriculture in Hawaii, which left behind vast open lands in which non-native grasses have flourished. The non-native grasses “love fire,” Trauernicht said. They’ll get burned and resprout in days. Some native species, like acacia koa, will also spring back in the wake of a fire. But most struggle and typically never return to their original level.

“Every time we get a fire here, the race starts, and it’s a competition between these weedy grasses and the native stuff,” Trauernicht said. “And our native species, essentially, can’t compete.”

That’s why it’s important to find ways to change the landscape to less sensitive and less flammable vegetation, he said. Statewide, non-native grasses and shrubland cover 25 percent of the total land; in Maui County, it’s 36 percent.

“Rather than trying to weed wack or spray to kill the grass, maybe you should think about a more permanent strategy, like planting trees to shade those grasses out,” Trauernicht said. “In other words, converting that vegetation to something that’s less likely to burn.”

In Volcanoes National Park, for example, staff members are restoring areas with native plants that they know will recover after a fire. But creating a fire-resilient landscape can be a costly, long-term measure.

Chris Brosius, program manager of the West Maui Mountains Watershed Partnership, said after the presentation that the biggest limitation to forest restoration and fire prevention is funding.

“We have minimal resources to address the magnitude of the problem,” he said. “We have been looking at our road access infrastructure, trying to figure out strategic opportunities to allow for better fire suppression. . . . At the same time we want to reduce the fuels along those road corridors so that firefighters feel safer.”

Brosius said the watershed partnership has also worked with the Hawaii Wildfire Management Organization to develop a community wildfire protection plan, which would allow them to qualify for federal grants.

“We have been successful in getting some minor funds through the Forest Service to implement those firebreaks,” Brosius said. “But that is $140,000 that might help us realize about one-third of our goal over the next three years. Now, that’s just for fire breaks. . . . The comprehensive approach would be to help restore rangelands and fallow ag lands.”

While that’s the long-term plan, Trauernicht said there are plenty of things people can do in the meantime.

“A lot of people think about jumping right into fuels management,” he said. “One of the big things is just having access and safer conditions and water for firefighters. So I think some of the more immediate things is ensuring they have the safest conditions.”

Making sure people are prepared and can evacuate safely is another aspect.

Fire will always be a risk, Trauernicht said, pulling up a map showing the changing seasons on each continent and how fires spark as soon as the dry seasons hit. The difference in the tropics is that there can be fire conditions any time of the year.

“This is not a question of suppression,” Trauernicht said. “We’re not going to put all of these things out. We have to learn how to deal with it and live with it.”