Too much of a good thing at Molokini crater: Limiting tour boats considered

Overcrowding, changes in fish behavior at Molokini cited by DLNR 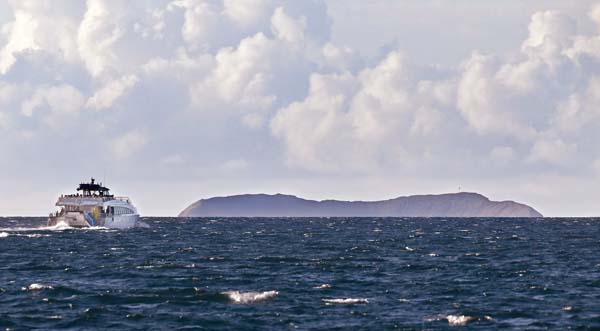 A tour boat motors toward the island of Molokini on Wednesday morning. Bills in the Legislature would limit the number of commercial boats moored at any one time in the crater to 20. But the state is considering a lower number of boats to protect the species there and to reduce overcrowding at Molokini. -- The Maui News / MATTHEW THAYER photo

The state Department of Land and Natural Resources has begun discussions into limiting the number of tour boats moored at Molokini at any one time to about a dozen after studies showed vessel overcrowding and changes in fish behavior.

Balking at the low number, commercial operators have taken their case to the state Legislature and drafted bills that put a “workable limit” of 20 permitted commercial vessels allowed to moor at the same time at the Molokini Shoal Marine Life Conservation District.

Tim Lyons, executive director of the Ocean Tourism Coalition, said Friday that the bills, House Bill 1133 and Senate Bill 1403, were drafted after the industry was “so frustrated” after hearing from the DLNR about its proposed 12-boat limit.

He said limiting the number to 12 commercial vessels is “just too little” and would harm businesses. He also worried about when that limit would take effect because tour operators book tours far in advance.

Commercial operators in testimony to the Legislature said having only 12 commercial boats in the crater is tricky because there are only a few hours in the morning where conditions are conducive to snorkeling, diving and other activities. 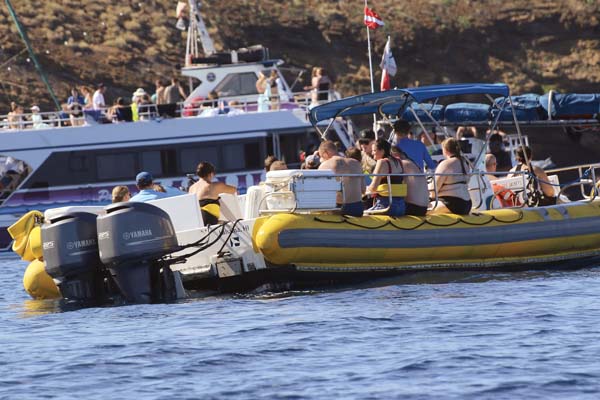 Commercial tour operators are shown moored off Molokini in November. The state is seeking to limit the number of commercial vessels moored in the crater. The state cites studies indicating overcrowding and issues with fish behavior. -- Department of Land and Natural Resources photo

Suzanne Case, chairwoman of the DLNR, noted in her testimony to the Legislature that data show that the average number of commercial boats in the crater at the same time during peak-use periods is 10 and that there were more than 12 boats about a third of the time.

Russell Sparks, a Maui-based aquatic biologist with the DLNR’s Division of Aquatic Resources, said Friday that the bills essentially maintain current commercial tour boat totals, because there are only about five days annually where the total exceeds 20. Normally, the number of boats is much lower.

Currently, there are 40 commercial-use permits, he said. The bills maintain that number.

DLNR began preliminary outreach last year to the commercial boating community in the wake of the studies showing overcrowding and changes in fish behavior, Case said.

A 2010 study found that more than two-thirds of visitors to Molokini felt crowded and that too many boats were in the water, said Case. 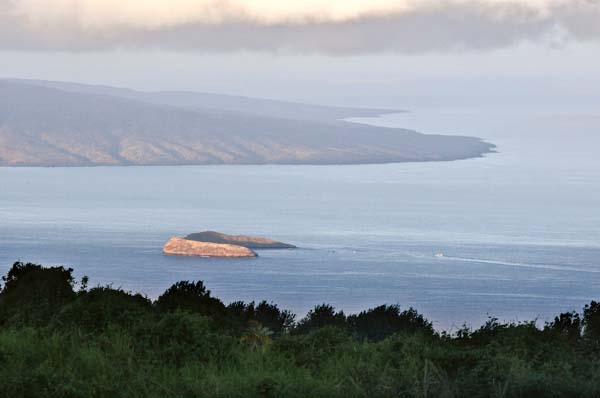 Sunrise lights up the island of Molokini as a line of tour boats approaches the popular dive spot last year. -- The Maui News / MATTHEW THAYER photo

Case also mentioned a study in 2016 of reef predator movement that found that 50 percent of omilu or bluefin trevally, a key nearshore reef predator, were displaced outside the shallow crater of Molokini and into deeper water when the number of boats exceeded 12.

The reef predator most affected by boats at Molokini were the omilu, he said. Omilu hang out at the crater during the day and enjoy the shallow reef there from 8 to 10 a.m., which also is the peak time for commercial tours, Sparks said.

When there were 12 boats or more in the water, about half the omilu moved to other areas. “They don’t really have other habitat,” he said. “That’s where they hunt and forage during the day.”

Omilu are important to the reef, said Sparks. Studies show that algae-eaters stay closer to their habitat if reef predators like omilu are around. If there are no predators, the fish will move to other areas, robbing the reef of the intensive grazing, which helps stimulate growth.

Alan Friedlander, chief scientist for National Geographic’s Pristine Seas Project and director of the University of Hawaii Fisheries Ecology Research Lab, which was part of the 2016 study, echoed Sparks’ comments.

He said the “displacement of omilu and other species can lead to lost feeding opportunities, reduced reproductive success and increased competition for resources.”

He said that reef predators, who were examined from 2014 to 2015, “play a critical role in maintaining ecosystem function and their displacement can compromise overall ecosystem health.”

Sparks said the legislative bills do “nothing to reduce our concerns with crowding and concerns in the reserve.”

He said the department would rather use the administrative rule-making process than the legislative process to deal with Molokini overcrowding. DLNR is in the preliminary stages of working with stakeholders and plans to have public meetings sometime in March.

Though the studies point to the 12-boat threshold, Sparks said DLNR has not locked in on a number. It is looking at ways to amend the rules to help the boaters as well as protect the fish.

DLNR wanted to reach out to the stakeholders early on, Sparks said, adding that the rules are not a done deal.

“We absolutely don’t want to put anyone out of business, (but) we do have a responsibility to manage the marine conservation life district as well,” Sparks said.

“Our understanding is the only time the boats are there are those early morning hours,” he said, noting the boats are gone before noon. Boaters see some fish move when they are there, but they tend to move back as the boats leave.

“We haven’t seen really negative studies on that,” he said.

James Coon, president of the Ocean Tourism Coalition and one of the founders of Trilogy Excursions, a longtime ocean tourism business in Maui County, testified in support of the bill.

“The Molokini operators have managed to work together for over four decades,” he said. “There is currently not a problem in Molokini, but this legislation will ensure that Molokini Shoals MLCD remains pristine and accessible in the future.”

He pointed to the limited time boats have in the crater because trade winds begin to pick up between 10 and 11 a.m. Because the number of commercial permits to moorings ratio is about two to one, each company has to modify its schedule to share a mooring.

There also may be some  unpermitted  vessels that “drift” and not use a mooring, which could lead to overcrowding the future, Coon said.

He says the bill ensures that permit holders “will have adequate time in the crater to conduct their tours and deliver the world-class experience our guests deserve.”

House Bill 1133 passed second reading in the House Committee on Water, Land & Hawaiian Affairs on Wednesday. It has been referred to the House Judiciary Committee. A hearing date had not been set as of Friday afternoon.

Senate Bill 1403 has a hearing at 1:20 p.m. Wednesday in the Senate Water and Land Committee.

Molokai High School senior Cameryn Rae Kahalewai describes her project, “The Effect of Soil Type, Salt, and Feral Animal Fencing on the Plant Distribution and Abundance on Kalaupapa Peninsula, Molokai” at the Maui County Regional Science & Engineering Fair on Thursday. Kahalewai took first place in the Senior Division of the 60th annual event and won several other awards, including being named an Intel Finalist and earning the honor of representing Maui County at the  Intel International Science & Engineering Fair in Phoenix, Ariz. — The Maui News / MATTHEW THAYER photo

The state’s first-of-its-kind, self-serve kiosk for car registrations will be opening Monday at the Maui Lani Safeway. The kiosk will be available 5 a.m. to 2 a.m. daily,

Sunrise lights up the island of Molokini as a line of tour boats approaches the popular dive spot last year. — The Maui News / MATTHEW THAYER photo

Commercial tour operators are shown moored off Molokini in November. The state is seeking to limit the number of commercial vessels moored in the crater. The state cites studies indicating overcrowding and issues with fish behavior. — Department of Land and Natural Resources photo

A tour boat motors toward the island of Molokini on Wednesday morning. Bills in the Legislature would limit the number of commercial boats moored at any one time in the crater to 20. But the state is considering a lower number of boats to protect the species there and to reduce overcrowding at Molokini. — The Maui News / MATTHEW THAYER photo