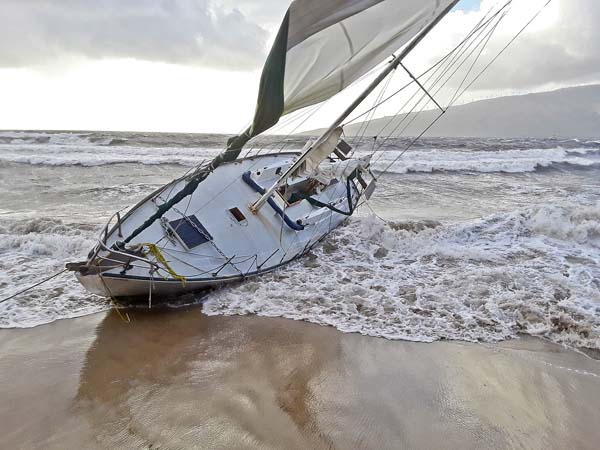 Strong winds and high surf broke multiple boats from their moorings and pushed them aground, including this sailboat just south of the Kihei Canoe Club. KEVIN OLSON photo

The wintry conditions were brought on by a powerful storm tracking southward toward the Hawaiian Islands, bringing a band of enhanced moisture and predictions of up to 3 inches of snow on the summit of Haleakala, the National Weather Service said.

Shortly after noon on Sunday, the Summit District was closed due to snowy and icy road conditions, as well as power outages throughout the district, park spokesperson Nancy Stimson said. The closure was scheduled to remain in effect through at least 9 a.m. today, and today’s sunrise viewing was also canceled. Maui County officials also warned the public not to drive toward the summit.

Early Sunday morning, the National Weather Service had predicted intense snow showers, slippery road conditions and blowing and drifting snow at the summit above the 8,000-foot elevation level. Motorists were also warned of reduced visibility below a quarter-mile at times, with very windy conditions. A winter weather advisory was put into effect through 6 a.m. today.

A high-wind warning was also in effect for Haleakala through 6 a.m. today, with winds of 45 to 60 mph and localized gusts of over 95 mph predicted. 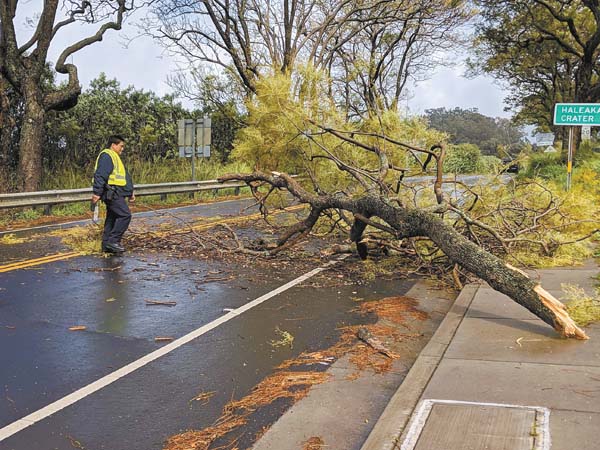 The Polipoli Spring State Recreation Area also got some snow — a rare event. Snow reached almost to Olinda in 1903, to Polipoli in 1918 and to a mile below the summit in 1920, according to Jill Engledow, a former Maui News reporter and editor who reviews the newspaper’s archives for the weekly feature “Looking Back Through The Maui News.” Most instances of snowfall since then have been at the summit. The last snowfall was a 1.5-inch event on Presidents Day 2018.

Upcountry experienced some of the most rainfall countywide — the Kula 1 rain gauge recorded 1.3 inches of rain over a 24-hour period starting at 5:45 p.m. Saturday, while the Kula Branch Station got 1.03 inches. Puu Kukui in the West Maui Mountains had the most rainfall with 1.42 inches. All gauges on Molokai and Lanai recorded less than an inch of rain.

Jill Johnson, manager of Kula Bistro, said her restaurant seemed to be one of the few businesses in the area that still had power on Sunday afternoon.

“We currently have electricity and the phone is ringing off the hook,” Johnson said. 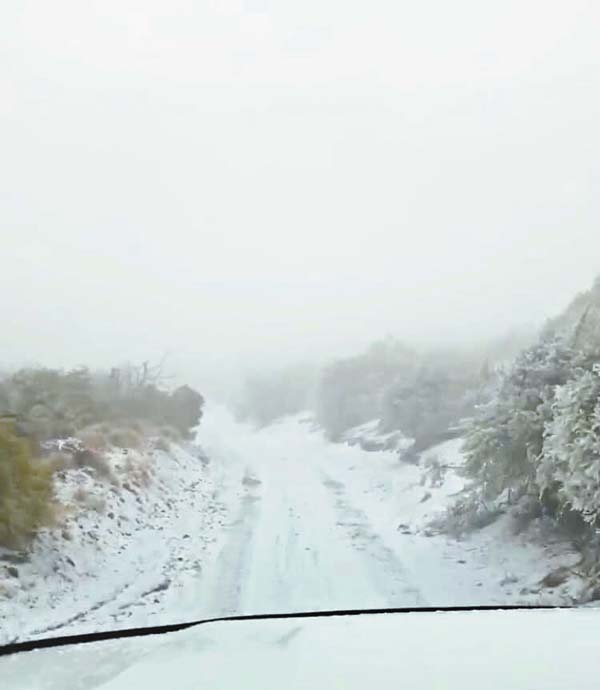 Snow blankets the ground in the Polipoli Spring State Recreation Area around 8 a.m. Sunday. Polipoli experienced a rare snowfall as a powerful winter storm blew through the islands, knocking down trees and power lines and drumming up big surf that washed boats ashore. LANCE ENDO photo

Despite the storm, or maybe because of it, Johnson said the restaurant was “super busy,” full of customers wrapped up in coats, scarves, hats and gloves. Johnson said Kula Bistro planned to be open through 8 p.m., its normal hours, so long as the power stayed on.

Roger Gazmen, the general manager at Ulupalakua Ranch Store, said the store had not experienced any power outages, “which is very surprising to be honest, because that’s the one thing we’re prepared for.”

Gazmen said business wasn’t as good as it normally is on a Sunday, likely because of the storm. He said the weather had been “a bit tricky” all day.

“Earlier today we had periods of gusty winds and rain,” Gazmen said. “And we also had periods of sunshine, and most of the day was overcast and cold.” 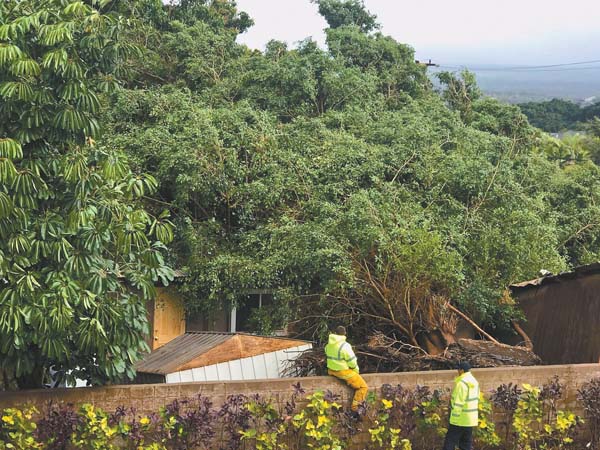 Firefighters respond to a large tree that fell on a house at Halenani Place in Kihei on Sunday, causing major damage. Maui Fire Department photo

The weather was unpredictable in many parts of the island. In East Maui, cold and windy conditions gave way to “nice beautiful trades” and sunny skies late Sunday, said Claire Carroll, floor supervisor at the Hana Ranch Restaurant. Carroll described the weather as “bipolar.”

“Big gusts of wind. It’s mostly affecting the trees,” she said. “And we’re having really fast, passing showers, so there’s a lot of debris on the road, especially outside of the restaurant because we have the large trees.”

Carroll said business had been slow Sunday and that the electricity had been going on and off. She said the brunt of the storm actually hit Hana on Saturday.

Across the county, strong winds and rains took down multiple trees and power lines, causing long-lasting outages. Customers in Waikapu had power restored by 2:20 p.m., and some customers in Central Maui, East Maui, Upcountry and parts of Wailuku and Haiku had power again by 6 p.m., Maui Electric Co. said. Crews also restored power to customers on Molokai’s East End and customers in the Lalakoa area on Lanai.

However, MECO warned that customers in Olinda, Piiholo and parts of Haiku along Kokomo Road and Kauhikoa Road could experience an extended outage through the night. Extensive tree clearing work, as well as darkness and windy conditions, were slowing the replacement of downed poles and other equipment, MECO said.

Because of the power outages, the county Department of Water Supply asked customers to conserve water through Monday as a precaution. Water service was not interrupted, but “without power, we can’t run our pumps to keep the tanks full, or at a safe level,” department administrative officer Jacky Takakura explained Sunday.

Falling trees and road closures kept first responders busy all day Sunday. County spokesman Christopher Sugidono said that firefighters responded to small brush fires in Haiku and near the Waiehu Kou subdivision. Crews also freed a woman stuck in an elevator after power went out in South Maui, and responded to a large tree that fell on a house at Halenani Place in Kihei, causing major damage.

Multiple boats broke free from their moorings throughout West and South Maui, including at Kamaole Beach Park I and Front Street at Fleming Road.

Sugidono said that Waiehu Golf Course and all beach parks would be closed until further notice. The Department of Parks and Recreation planned to assess the situation today. Recycling centers in Kihei, Haiku and Makawao were closed due to high winds, and the Department of Environmental Management planned to evaluate the centers today. The Maui Bus was running on its regular schedule, though the county warned that riders could experience delays due to the storm. Riders can find updated information and track the bus via the Maui Bus app.

All public schools planned to open as usual today, though the state Department of Education said it would continue to monitor the weather.

Power outages should be reported to MECO at 871-7777 on Maui and toll free at (877) 871-8461 on Molokai and Lanai. Outage notifications are posted on the company’s Twitter @MauiElectric.

For county updates or to register for the county’s Maka’ala emergency alert system, visit mauicounty.gov.