500 indigenous scholars on Maui for conference

It is first time research event held in Hawaii 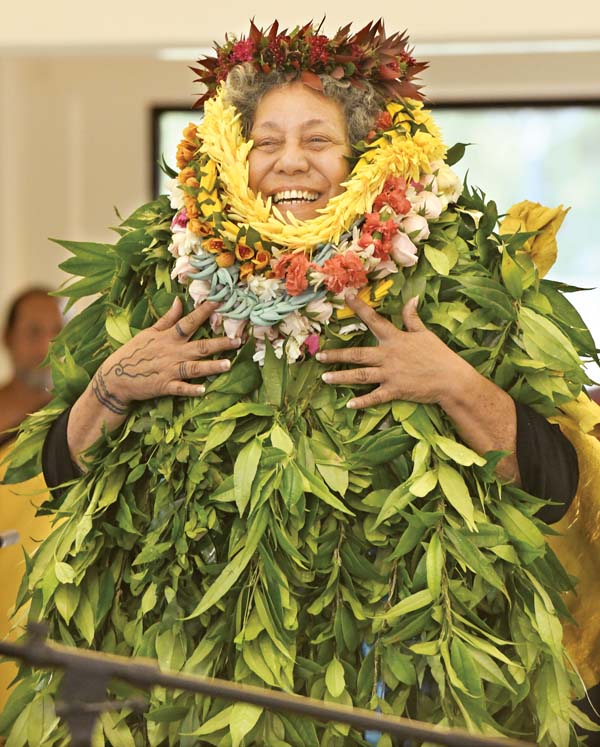 Hokulani Holt Padilla is covered in a cascade of lei after receiving an honorary doctorate degree from The World Indigenous Nations University on Tuesday afternoon during the 2019 He Au Honua at UH-Maui College. The Maui News / MATTHEW THAYER photos

The He Au Honua: Indigenous Research Conference is welcoming about 500 people to the gathering of indigenous scholars. They will present research to demonstrate how indigenous intelligence can offer world-class, data-based, culturally grounded solutions for modern issues.

The conference opened Tuesday and continues until Friday at the college. Registration is full, organizers said.

Hawaii was chosen in 2017 to host the conference to signify the close ancestral ties between the Maori, the indigenous Polynesian people of New Zealand or Aotearoa, and kanaka maoli, or Native Hawaiians. The conference is held every other year. It was last held in Aotearoa.

One of the two keynote speakers during the opening session, Ulalia Woodside, a kumu hula and executive director of The Nature Conservancy of Hawaii, touted Hawaii and its native people, who with their special culture and values can be a beacon for future survival. 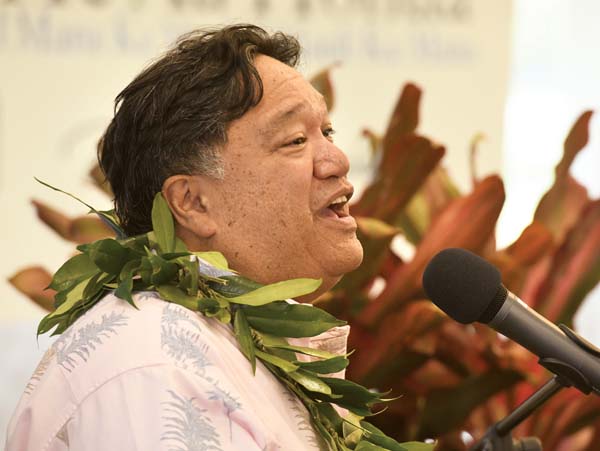 UH-Maui College Chancellor Lui Hokoana welcomed the 500 indigenous scholars to the Kahului campus and the He Au Honua: Indigenous Research Conference on Maui on Tuesday. He offered a chant and song.

She attributed this to being grounded in traditional values. In Hawaii, this means hula, the Hawaiian language and other cultural practices. If there are voids in cultural learning or teaching, she said “masters” will see them and fill them.

Woodside’s sister, Hokulani Holt-Padilla, also a kumu hula and noted educator and cultural leader, shared her thoughts at the conference.

Holt-Padilla told the crowd that if they did not know where their aina kupuna were, or lands of their ancestors, then they need to find out.

“I charge you to find out. Find out where the lands of your ancestors are and remember them in all the ways that are possible,” she said.

Prior to her address, Holt-Padilla was presented an honorary doctoral degree of education for services to indigenous education from the World Indigenous Nations University at Sami University of Applied Sciences in Norway.

Topics to be addressed at the conference include revitalizing indigenous languages, Hawaiian drama and media, navigating new models of indigenous health and well-being and more.

Water is life, and because a manawa whenua originates deep within the earth, Maori believed it to be a precious resource vital for the well-being of the people, according to the conference website.

The conference theme is “I Mana ka Mauli, I Mauli ka Mana” or “Life is Divine Power, Divinely Powerful is Life.”

Conference organizers are Kamehameha Schools and UH-Maui College, along with the Native Hawaiian Education Association, which is also the conference host.

For more information, go to heauhonua.com.

Maui County Mayor Michael Victorino poses Tuesday with the women he appointed to the Department of Housing and Human Concerns. Lori Tsuhako (right) was nominated to head the department and requires confirmation by the County Council. The department’s deputy will be Linda Munsell (left). The mayor made the announcement at a news conference Tuesday morning. County of Maui / CHRIS SUGIDONO photo

Rocky Balala (left) and Furious Borge will compete in the Western Elite Qualifier & Regional Open Championships next week in Reno, Nev. The event is a step toward the USA Boxing Olympic Trials. The Maui News / ROBERT COLLIAS photo

Belinda Lau, manager of the Wiki Wiki Drive Inn takeout restaurant in Honolulu, holds a polystyrene foam box containing an order of roast pork, rice and salad Thursday. Hawaii would be the first state in the nation to ban most plastics used at restaurants, including polystyrene foam containers, if legislation lawmakers are considering is enacted. The aim is to cut down on waste that pollutes the ocean. AP photo

Hokulani Holt Padilla is covered in a cascade of lei after receiving an honorary doctorate degree from The World Indigenous Nations University on Tuesday afternoon during the 2019 He Au Honua at UH-Maui College. The Maui News / MATTHEW THAYER photos

Lei of Aloha for World Peace founder Ron Panzo is assisted by Kihei’s Margaret Kinney on Tuesday in Kihei as he works on a long, multi-strand lei headed to Christchurch, New Zealand. The section was one of the last to be completed to reach the goal of creating a mile-long lei to be presented in Christchurch in memory and honor of the victims of the recent mass shooting there. Panzo estimated 250 volunteers took part in making the lei, starting Saturday and continuing through Tuesday afternoon. Additional sections were made by groups on the Big Island and Kauai. A small delegation led by Kimokeo Kapahulehua and musician Anthony Pfluke is scheduled to leave tonight with the lei. Kihei’s Denni Grace said she has helped with every Lei of Aloha, including for victims of attacks in Parkland, Fla., and Paris. “I have friends in New Zealand and I’m in awe of their strength and their wisdom,” Grace said. “They have figured out they are in mourning and to not go to anger.” The Maui News / MATTHEW THAYER photos

Iowa resident Heidi Winn makes a section of ti-leaf lei Tuesday afternoon. She and her husband happened to be walking by and joined in. “When we heard what they were doing for New Zealand, we were really moved because our 14-year-old transgender son committed suicide two years ago,” Winn said. Husband Jean Bousquet added, “We were on the receiving end of so many blessings and healing support of strangers.” They said acts of kindness like Lei of Aloha really do make a difference in the lives of those suffering through tragedy.

UH-Maui College Chancellor Lui Hokoana welcomed the 500 indigenous scholars to the Kahului campus and the He Au Honua: Indigenous Research Conference on Maui on Tuesday. He offered a chant and song.

Stan Honda captures the Milky Way as it rises over PanSTARRS and the Daniel K. Inouye Solar Telescope in the predawn hours. Honda is the 2019 artist in residence at Haleakala National Park. Photos courtesy of Stan Honda

Questions about ID use not concern of DMV here