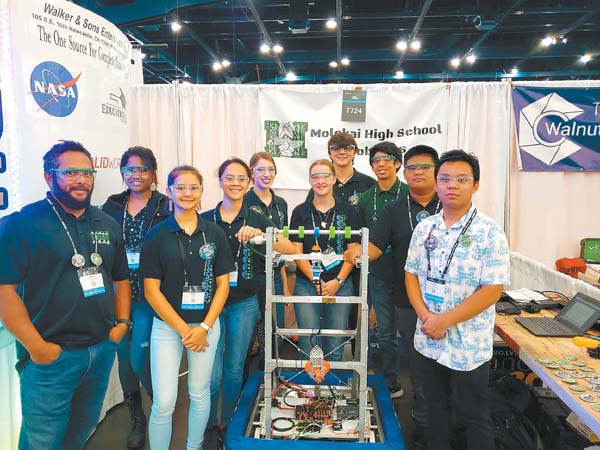 Just three weeks ago, the dream of competing on a world robotics stage seemed financially out of reach for Edwin Mendija and the Molokai High School robotics team.

But after donations poured in from a fellow robotics team and dozens of community supporters, Molokai’s Team 7724 traveled to Houston and came home with the Hopper-Turing Division Rookie Inspiration Award in the school’s first appearance at the world championship level.

“We definitely originally weren’t going to go, even if we qualified,” Molokai robotics teacher Edwin Mendija said Sunday. “But thanks to mainly ‘Iolani School and all of our generous support, we were able to make it out there.”

The FIRST Championship (For Inspiration and Recognition of Science and Technology) drew more than 15,000 students to Houston, including Molokai and Maui High, which made its third worlds appearance in 12 years.

Last month, Molokai clinched the Rookie All-Star award at the 12th annual FIRST Robotics Competition Hawaii Regional. The seven-member team secured an invitation to the world championship, where registration alone is $5,000. Between entry fees, flights, lodging, transportation and meals, a trip to worlds can set a robotics team back $15,000 to $20,000. 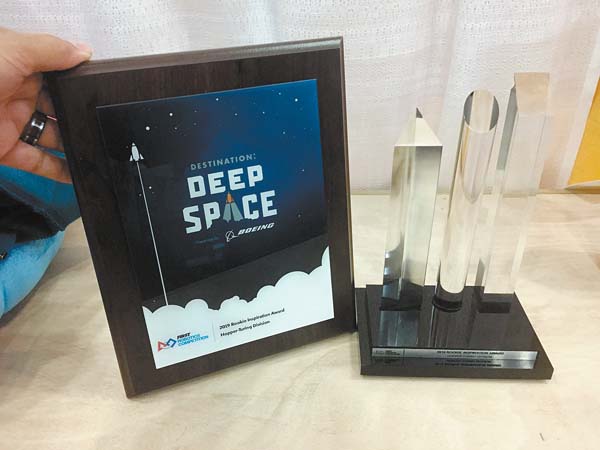 Molokai came home with the Hopper-Turing Division Rookie Inspiration Award, given in recognition of the school’s STEM (science, technology, engineering and math) outreach program, on top of its normal robotics program.

That’s where ‘Iolani came in. At the Hawaii regionals, the school’s robotics team won the Engineering Inspiration award, which came with a $5,000 NASA grant that they decided to donate to Molokai. The school then started a GoFundMe page for Molokai that raised $13,075 over the course of three weeks.

“We are forever indebted to that team,” Mendija said. “They got us to our first world championships ever for a high school team on Molokai.”

The competition, which ran Wednesday through Saturday, was “definitely a bit overwhelming for some of the kids,” Mendija said. The team competed in a game called “destination: deep space,” where they had to use their robot to place a series of plastic disks and balls into scoring docks. After going 1-5 in the first matches, the team recovered and won four straight with the help of its alliances, Mendija said.

“We kind of underestimated ourselves,” he explained. “We figured since we were rookies, we would let the other people play more of their game and try to adjust our strategy around theirs. We probably should’ve played what we were strong at the whole time.”

The team did better after it started playing more offense than defense, he said. 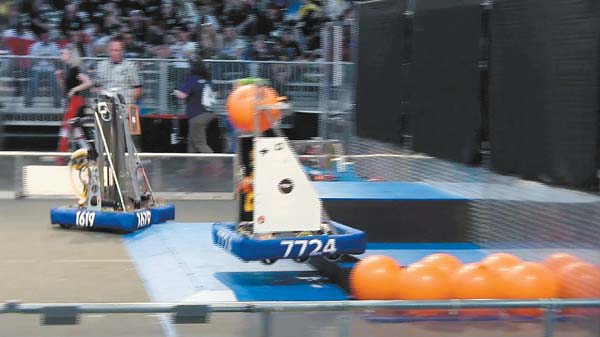 Molokai’s Team 7724 robot competes in a match, which required the robots to carry plastic disks and balls to various scoring docks.

Molokai senior Cobra Curtis said those first few matches taught the rookie squad an important lesson about recognizing “that we have a voice, even though we’re new to the game.”

“We’re able to make our own decisions and stand up for ourselves, especially when older teams are trying to come up with a strategy that we feel won’t work,” Curtis said. “We let them push us around because we feel maybe they know what they’re talking about. But I think at the end we kind of realized . . . that we ourselves are an asset.”

Molokai ended up ranking 43rd out of 66 teams in the Turing Subdivision. The team earned the Rookie Inspiration Award for its strong STEM (science, technology, engineering and math) outreach program, “on top of our normal robotics program,” Mendija said.

This school year, Mendija decided to transition the high school to FIRST, which he called “the varsity of competition robotics.” The robots are much larger, and in the run-up to regionals, the team had a six-week deadline to design, build and program a robot. The team used what it could find — old electric signs, extra metal, a drill and chop saw.

“We’ve been a lower-resource team, so we worked with what we got and we just hoped for the best,” said Mendija, who also coaches elementary and intermediate students through his Mendija Robotics Academy. “I never expected anybody to help us out the way they did.”

Curtis said that “the whole team is extremely grateful” for the community support, and that the students enjoyed working with different schools and learning about STEM opportunities.

“I think a lack of resources kind of made it where we weren’t able to compete at our fullest, and being unexperienced made it a little more difficult for us to be able to know exactly how things were going to play out, but we actually did pretty well,” said Curtis, who plans to study computer science and renewability at Bowdoin College in Maine.

Molokai sophomore Kamalu Kaawa-Richardson said it was a challenge “competing with other teams that were bigger and had more experience over us,” but that the team did better after turning its attention to scoring points.

“Definitely focus on what you gotta do,” Kaawa-Richardson said of the lessons he learned. “Don’t try and get sidetracked, and just try and do your best.”

The sophomore added that he plans to work in the engineering field someday, and that a competition like this “really helps me open up on what I want to go into.”

Maui High’s Team 2443, which has a roster of 31 students and is led by teacher Keith Imada, won four matches and lost six at the championship. It finished 36th out of 67 teams in the Galileo Subdivision. The team could not be immediately reached for comment late Sunday.