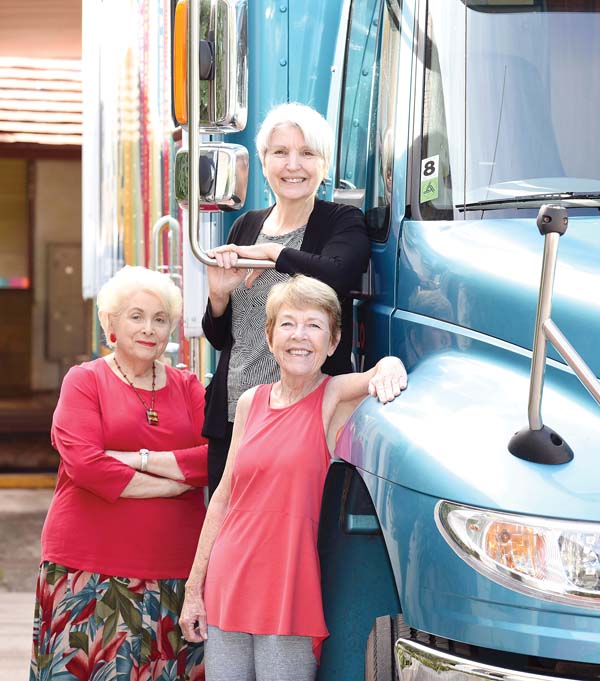 Dorothy Tolliver (from left), Susan Werner and Sara Foley pose with the new Holoholo Bookmobile they helped bring to Maui. They also got lawmakers to fund a librarian position for the bookmobile. The Maui News / MATTHEW THAYER photo

They say good things come in threes. That’s certainly the case with Sara Foley, Dorothy Tolliver and Susan Werner, who joined forces five years ago to purchase a gift for the Hawaii State Public Library System: The Holoholo Bookmobile.

“We decided that if we were going to give a bookmobile to the state, we wanted to give it the very best,” Foley said. “And that’s what we did.”

The trio met several years ago through their mutual love of books. Tolliver is the reference librarian at University of Hawaii Maui College and past president of the Maui Friends of the Library; Werner is the branch manager at Wailuku Public Library; and Foley is a Maui Friends of the Library board member who also spearheaded the remodeling of the Lahaina Public Library in 2012.

Bookmobiles have a storied past on Maui. The first, a Ford Roadster with a rumble seat, hit the road in 1926, and since then, several iterations of the mobile library have rolled through town, driving home a love of reading.

In 1995, state budget cuts deprived Maui’s bookmobile of a critical component: a librarian.

“The position was eliminated,” Werner explained. “We only had a driver.”

Then, last year, the decades-old bookmobile gasped its last breath.

“It was beyond repair,” Tolliver said. “We’d known for some time that it was on its last legs. We were doing a lot of repairs.”

In anticipation of the bookmobile’s impending demise — and the lack of funds to replace it — the women made a pact five years ago: They vowed to raise enough money to purchase a new bookmobile through the Maui Friends of the Library and then lobby state legislators to pay for a mobile librarian and a driver.

The Maui Friends of the Library was established in 1912, following the opening of the first Free Public Library at the Alexander House Settlement in Wailuku. Today, the nonprofit organization funds materials and programs for Maui County’s libraries in addition to what is allocated through the Hawaii State Public Library System. The Maui Friends of the Library has three, all-volunteer-run bookstore locations: Puunene (behind the old Puunene School), Kahului (in the Queen Ka’ahumanu Center) and Lahaina (in The Wharf Cinema Center).

With their fundraising in place, the women mobilized quickly. Tolliver headed the Maui Friends of the Library’s bookmobile committee, Werner served as the bookmobile consultant, and Foley acted as the political navigation expert for the purchase of the bookmobile.

“It took us three years, but we did it,” Foley said.

Remarkably, the $300,000 bookmobile was funded entirely by the Maui Friends of the Library through the sale of thousands of donated and used books, many of which would have likely wound up in the landfill.

“That’s a lot of 25-cent books,” Tolliver said. “This was really a community effort — the patrons of the bookstores paid for this bookmobile.”

In 2015, after years of strategic planning, speaking to community groups, working with graphic designers and bookmobile consultants and attending bookmobile conferences, the women embarked on the final leg of their journey.

“That was the big push,” Werner said. “We went to the state Legislature and said: ‘Here’s the gift we purchased for you, now can you please give us a librarian and a driver?’ ”

And they wouldn’t budge until that happened.

“We went to every legislator’s office,” Tolliver said. “We weren’t going to take no for an answer. . . . We were going to see this thing through.”

Their dogged determination paid off. After years of writing letters, sending emails, making phone calls and knocking on legislators’ doors, the state Legislature agreed to fund the positions.

In September, the Holoholo Bookmobile made its inaugural run. It has its own full-time librarian, Jessica Gleason, and a full-time driver, Michael Tinker. Housed at the Wailuku Public Library, the 30-foot-long bookmobile makes up to 40 different stops every three weeks, including senior housing complexes, adult day care centers, private and public schools, preschools, Boys and Girls Clubs, homeless centers and neighborhoods.

The custom-designed, state-of-the-art traveling library has no shortage of impressive features, including an onboard computer system, Wi-Fi, rollout awning, hybrid engine, skylights and solar panels. There are books for every age and every reading genre, along with periodicals, e-books, videos, DVDs and CDs. Readers can preorder books or browse the selection onboard; they can renew or sign up for a library card, too.

For Foley, Tolliver and Werner, the Holoholo Bookmobile is a dream come true.

“Every time I see it, it makes me happy,” Werner said. “It feels like all is right with the world . . . and in library land.”

To learn more about the Maui Friends of the Library, visit www.mfol.org.

Dorothy Tolliver (from left), Susan Werner and Sara Foley pose with the new Holoholo Bookmobile they helped bring to Maui. They also got lawmakers to fund a librarian position for the bookmobile. The Maui News / MATTHEW THAYER photo

Don McLeish points to Honokowai Point, where he has saved many swimmers from the dangerous rip current. He’s towed more than 100 people out of the rip current since 2009, likely saving their lives. The Maui News / MATTHEW THAYER photo

Judy Guajardo (from left), volunteer coordinator; Alida Murray; Candice Carter, executive director; and Kimber Niemann pose for a photo in the Na Hoaloha office in Wailuku. Na Hoaloha is a nonprofit organization that pairs volunteers with seniors or people with disabilities who need assistance with daily tasks or just a friend to talk to. The Maui News / MATTHEW THAYER photo

Wesley Lo, the former chief executive officer of the quasi-public entity that runs Maui Memorial Medical Center, led efforts to improve the Wailuku hospital, including the construction of the wing in the background. He also led the difficult battle to create a public-private partnership with Kaiser Permanente to operate Maui Memorial, Kula Hospital and Lanai Community Hospital. The Maui News / MATTHEW THAYER photo

Dean Yamashita (left) and Craig Okita, former opponents on the diamonds of their youth, are coaches for the All Pono Organization. They teach more than baseball to their young players; they use the game to offer lessons about life. The Maui News MATTHEW THAYER photo