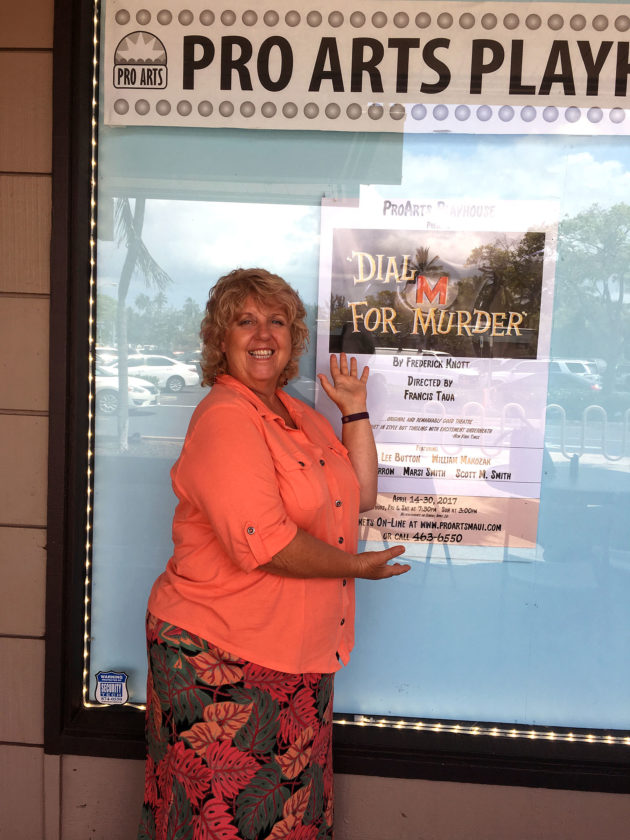 Kristi Scott has big plans for the ProArts Playhouse, including creating more opportunities for local playwrights and adding more classes and workshops for kids and adults. “I’ve always loved this theater,” she said. “I’m very passionate about this place and I want to see it thrive.” Scott is the new executive director of ProArts Inc.

Every actor has to start somewhere, and for Kristi Scott it was in the cafetorium of her California elementary school. That’s where a 6-year-old Scott made her stage debut after landing her first supporting role: the rear end of a cow.

“I was a really good rear end of a cow,” she laughed.

It may not have been her breakout performance, but Scott says that’s when she caught the acting bug, and in the years that followed she jumped at every opportunity to perform.

“I was in every school play,” she said. “I loved being on stage.”

Then, at the age of 15, Scott was cast in her first starring role: She played the character of Ruth in Gilbert and Sullivan’s “The Pirates of Penzance.”

“I was totally hooked on theater by then,” she said. “It’s all I ever wanted to do.”

After high school, acting took a back seat — but only for a short while. Scott attended broadcasting school and found her groove as a radio disc jockey in northern and central California. In 1981, after a few years on the airwaves, Scott says she felt the magnetic pull of the theater, so she signed off for the last time and headed to San Francisco. There, she enrolled in studio theater classes, dabbled in just about every genre and auditioned for everything she could. Her persistence paid off.

It wasn’t long before Scott made her mark as a versatile performer who could masterfully balance the masks of comedy and tragedy.

“It feeds my soul when an audience is receptive, when there’s an emotional response,” she said. “I want to make them laugh or make them cry — I either want to see big tears or hear big laughs.”

Eventually, Scott moved from the stage to the director’s chair, making her directorial debut in a production of “Charlie and the Chocolate Factory.”

“It’s easier to direct when you’ve been a performer,” she explained. “The work is different, but you use many of the same techniques.”

In 2003, after 22 years of directing and performing, Scott decided to take a break. So, she packed her things and moved to Maui, where she planned to work as a wedding officiant (she’s an ordained minister). But things didn’t go according to plan. Two weeks after she arrived, Scott changed course and took a job as a teaching artist in the Maui Academy of Performing Arts’ Voices program, which uses drama to help elementary school students improve their literary skills.

In a case of history repeating itself, Scott’s second acting hiatus was also short-lived. Since 2003, she’s racked up a number of starring and supporting roles in theatrical plays and musicals brought to life by Maui OnStage, ProArts Inc. and MAPA. (She said that one of the greatest moments of her career was playing Madame Thenardier in MAPA Live’s production of “Les Miserables.”)

And she’s been staying busy. Two years ago, Scott and six other comedic actors banded together to create an ensemble group called Free Range Comedy. The “uncaged” comedy troupe now performs shows three times a month. Scott, who continues to work as a teaching artist for MAPA, also brings her acting experience to students in afterschool programs, as well as theater camps and workshops during school breaks.

Earlier this month, Scott accepted a new role — this time she’s taking center stage as the executive director of ProArts Inc. Headquartered in the ProArts Playhouse in Kihei’s Azeka Shopping Center, the 501(c)3 nonprofit provides the community with affordable access to live theater and other performing arts.

“I’ve always loved this theater,” she said. “I’m very passionate about this place and I want to see it thrive.”

Scott is following in the footsteps of the late Jonathan Lehman, who founded ProArts nearly a decade ago. Under Lehman’s direction, ProArts burst onto the scene with a fractured fairy tale version of “Cinderella” (Scott was cast as the Fairy Godmother), followed by an annual slate of comedies, dramas and musical revues.

“Jonathan had a beautiful gift for choosing plays,” Scott said. “He always kept it interesting.”

Since the ProArts Playhouse opened its doors eight years ago, an impressive roster of seasoned and budding actors have graced its stage, including Scott. The theater is also known for presenting an eclectic range of productions and providing a launch pad for aspiring actors and directors.

“It’s earned a reputation for being slightly edgy,” Scott said.

Now that she’s at the helm, Scott has big plans for the theater, including creating more opportunities for local playwrights and adding more classes and workshops for children and adults.

“We are going to bring in some new energy,” she said. “You can expect some changes.”

As for what’s in store for theatergoers, the lineup for next season (which begins in September) will be announced soon. “Stay tuned,” Scott said. “It’s going to be great season.”

Until then, there’s plenty of drama to go around at the ProArts Playhouse. A production of Alfred Hitchcock’s 1954 crime mystery, “Dial M for Murder,” opens tonight and runs through April 30.

For more information about ProArts Inc., to inquire about volunteer or donor opportunities or to reserve a seat for “Dial M for Murder,” call 463-6550 or visit www.proartsmaui.com.