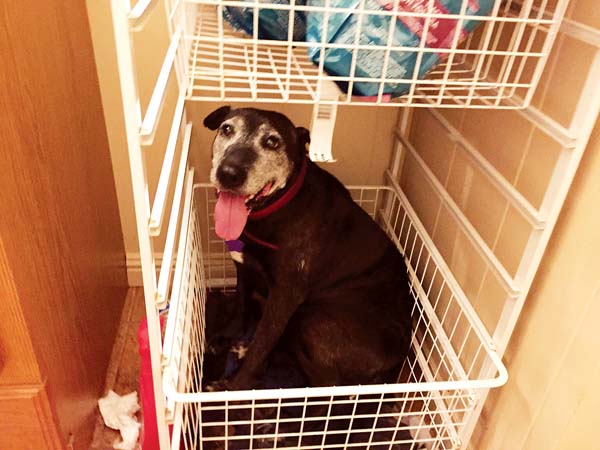 Valley Isle Animal Rescue dog Katie hides in a bathroom clothes hamper after being scared by fireworks last year. Organization co-founder Dennis Burns said the dog was breathing heavily and had her tongue hanging out in a sign of fear. She was rescued after being scared by Fourth of July fireworks six years ago and being hit by a car in Waihee. Valley Isle Animal Rescue photo

With some residents noticing an increase in illegal fireworks being set off earlier this year, a community event will be held Saturday to collect donations to help animals distressed by fireworks.

The one-day Fireworks Relief for Maui Animals donation drive will be held from 9 a.m. to 4 p.m. in the parking lot of Kahului Shopping Center.

Items needed include towels, pet food, pet crates, carriers, leashes, collars and small-sized or baby bed comforters. All items should be new or in good condition.

Santa will be on-site to help accept donations and greet pets and children.

The drive will benefit nonprofit Valley Isle Animal Rescue, which focuses on responding to animals in distress and in urgent need of assistance and rescue.

While families with pets can take steps to keep nervous and frightened animals safe on New Year’s Eve, when fireworks can be legally set off, that’s not the case when fireworks are set off illegally, said Suzanne Burry, who founded the volunteer-based rescue organization with her husband, Dennis Burns.

“With illegal fireworks, there’s no preparation time and animals panic and run,” she said.

In past years, people have started setting off illegal fireworks during the first week of December, Burns said. “This time, it’s been going off ever since Thanksgiving,” he said.

He said fireworks led to the death of one dog about a week and a half ago when the indoor pet was scared by fireworks, ran outside and was hit by a car.

In recent weeks, Burns said he has had to bring nine of the couple’s dogs in the house just after dark when fireworks begin going off Upcountry.

The organization has provided emergency rescue services since 2011, responding to more than 100 calls each year. Emergency calls are expected to rise as a result of illegal fireworks as New Year’s Eve approaches.

On New Year’s Eve two years ago, Burns had driven to Waiehu to retrieve dogs that were loose after being scared by fireworks. He was back Upcountry with two or three dogs, only to “turn around and go right back to that spot” for more dogs, Burns said.

The donation drive Saturday was organized by Friends of Mochi, a grassroots group led by Mahina and Ben Martin. They have had to search for their family dog, Mochi, after he was frightened by explosionlike sounds from illegal fireworks.

“It’s a shame that people who won’t save their fireworks for New year’s Eve don’t see what their fun is causing for many families and those families’ pets,” Mahina Martin said. “It’s truly heartbreaking when a runaway pet can’t be found or becomes injured by roadway traffic.

“Valley Isle Animal Rescue’s dedication to help animals in trouble is extraordinary,” she said. “They are often hard at work in the middle of the night searching and helping, especially now with early New Year celebrations affecting neighborhoods throughout Maui. Saturday’s donation drive is an opportunity to offer kokua to them.”

For more information or to volunteer for the event, call Mahina Martin at 385-1221. More information on Valley Isle Animal Rescue is available on Facebook or by calling 463-4194 or 463-4108.