Council budget committee OKs across the board tax hike that nets $17.7M more than mayor’s budget 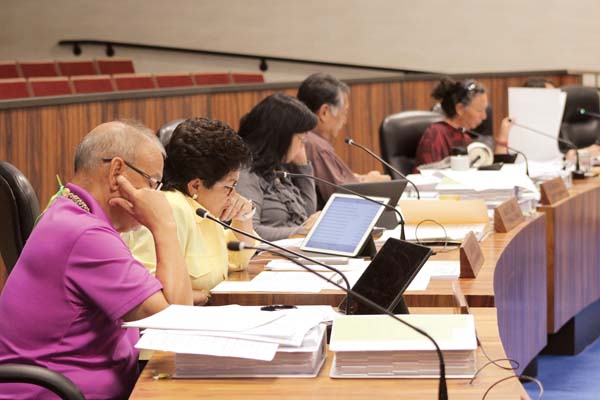 The County Council Economic Development and Budget Committee discusses property tax rates during the committee’s final budget meeting on Monday. The committee approved tax rates and its fiscal year 2020 budget, which must now be approved by the full council. The Maui News COLLEEN UECHI photos 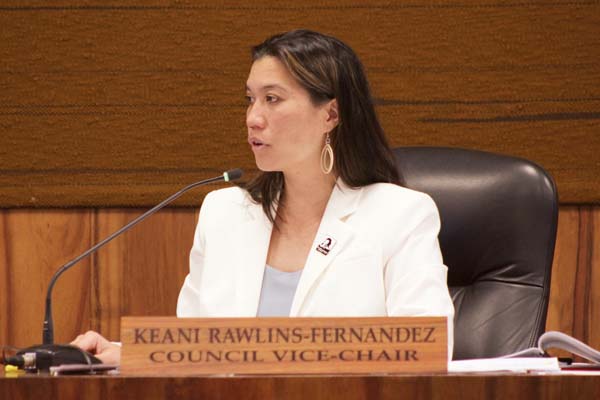 The tax rate is only one component of the actual bill that property owners receive. The other component is the assessed valuation of the property, which the county says is up 5 percent in the budget year.

Victorino’s tax proposal would generate $338.1 million in total revenues, roughly the same as what the county currently brings in for property taxes. The council committee’s proposed rates would bring in about $355.7 million, about $17.7 million, or 5 percent, higher than current revenues and the mayor’s proposal.

The net revenue under the council committee’s proposed rates would come out to $358 million, based on circuit breaker and minimum tax adjustments.

The rates must now undergo a public hearing, which is set for 10 a.m. May 10 in Council Chambers.

Property taxes are the county’s largest source of revenue, and short-term rental properties generate the most tax revenue by far. Under the council committee’s proposal, short-term rental revenues would increase from $87.6 million to $101.4 million, a 16 percent hike, while revenues from hotel and resort properties would rise from $27.5 million to $32.3 million or 17 percent.

The changes are lower than originally proposed by budget Chairwoman Keani Rawlins-Fernandez, who had at one time suggested raising both the hotel and rental rates to $15.41, but later brought a lower proposal to the table. On Monday, council members struggled to find a compromise.

“I really believe we need to be careful we don’t overcharge (hotels) because there will be a ripple effect on our employees, which would not be the same thing with timeshare and short-term rentals,” Council Member Alice Lee said.

Council Member Tamara Paltin, whose residency district includes West Maui, favored increasing tax categories with less local benefit while giving the hotels “a little bit more of a break because they do provide a lot of jobs.” She proposed the $11 rate, which council members approved 7-1.

Rawlins-Fernandez, the lone dissenting vote, said later that hotel rates have “been wrong all this time, and we’re finally getting it on track.”

“Tourists have major impacts on our quality of life, on our environment, on our infrastructure, and we’ve heavily subsidized those impacts with taxpayer dollars, so I think it’s finally at a rate that it should be,” she said. “I think it could even go higher.”

Meanwhile, council members were cautious about raising homeowner taxes. However, they pointed out that Maui County has the lowest homeowner rates in the state and that people have been asking for more services.

“We’ve been criticized by state legislators for not raising our homeowner rates over the years,” Lee said. “Our homeowners themselves have asked for more services and more programs, and so I think a 5-cent increase is fair.”

On Monday, committee members also approved their budget, but due to the changes made during the meeting, a final total was not available as of Monday evening.

The full council must approve its budget by June 10, or the mayor’s $781 million budget proposal goes into effect. Council Chairwoman Kelly King said that the goal is to do a first reading on the budget at the council’s May 17 meeting, followed by a second reading on June 7.