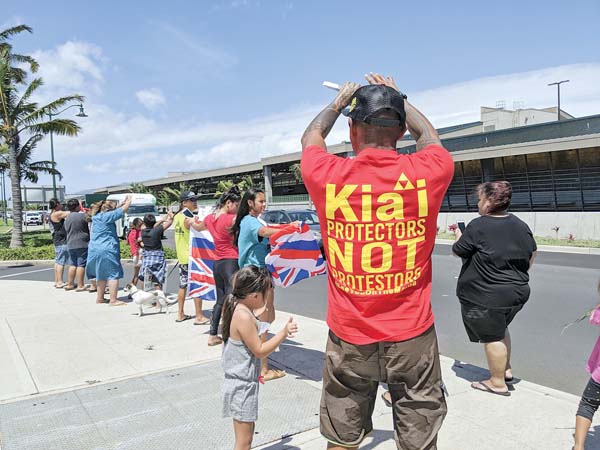 Protesters peacefully demonstrate on a walkway at Kahului Airport on Thursday morning against the Thirty Meter Telescope being built atop Mauna Kea on Hawaii island. The Maui News / LILA FUJIMOTO photo

KAHULUI — To protest the start of construction of the Thirty Meter Telescope at Mauna Kea, some Maui residents took to Kahului Airport on Thursday, holding signs at the airport entrance and honking horns as their vehicles passed the terminal.

“We feel we needed to do our part in some way,” said Ke’eaumoku Kapu. “A lot of us can’t fly to the mauna. We felt we needed to start focusing on our resources on Maui.”

Kapu was among those handing out flyers detailing the “significance of Hawaii’s sacred mountain,” Mauna Kea, on the Big Island and the Thirty Meter Telescope, which protesters say will desecrate the land and disturb the ecosystem.

While about 20 people carried signs, waved Hawaiian flags and blew conch shell as vehicles approached the terminal, others were in trucks and cars that slowly passed the terminal with horns honking.

Airport traffic lights were set to flashing yellow to keep traffic moving and there were no flight disruptions during the three-hour protest from 9:15 a.m. to 12:15 p.m. Thursday, said Maui District Airports Manager Marvin Moniz.

“It was peaceful, they cooperated with us,” he said. “They were making their rounds, trying to share their concerns as to what’s happening on Mauna Kea.”

Moniz said the group had told airport officials in advance about the protest, which occurred during a busy time at the airport. Protesters were given a designated spot for sign-waving and were told protest vehicles had to keep pace with airport traffic.

Police officers, including some traffic solo bike officers, monitored the flow of vehicles through the airport.

Kapu said the airport was chosen for the protest because it’s a center of commerce.

“It’s all commerce related,” he said. “We do this to make people think, to open up their conscious minds.”

Throughout this week, Maui County residents have been having their own rallies and sign-holding, including on Molokai and Lanai according to social media posts.

This photo provided by the Hawaii Department of Land and Natural Resources (DLNR) shows people who are against the construction of a Hawaii telescope continuing to block the roadway to the top of Mauna Kea, a mountain considered sacred by some Native Hawaiians, as the protest entered its fourth day Thursday, July 18, 2019. The action Thursday comes a day after 33 people were arrested, many of them elderly. Activists have fought the $1.4 billion Thirty Meter Telescope in courts and on the streets for years, but the latest protest could be their final stand as they run out of legal options. (Hawaii DLNR via AP)

Protesters peacefully demonstrate on a walkway at Kahului Airport on Thursday morning against the Thirty Meter Telescope being built atop Mauna Kea on Hawaii island. The Maui News / LILA FUJIMOTO photo

Firefighters recall black smoke eclipsing the sun, making “daytime look like nighttime,” in the 9,000-acre wildfire last week. This was the view of the fire headed to north Kihei July 11 along Maui Veterans Highway near the entrance to the Maui Humane Society, which was evacuated. The Maui News/ MELISSA TANJI photo

Maui firefighters clear and test a fire hydrant next to the Maui Humane Society on July 11 while waiting to make a stand against the fast-moving fire bearing down upon the facility. The Maui News/MATTHEW THAYER photo

Lahainaluna High School Class of 2019 graduate Jay Baptista will be heading off to Yale this fall.