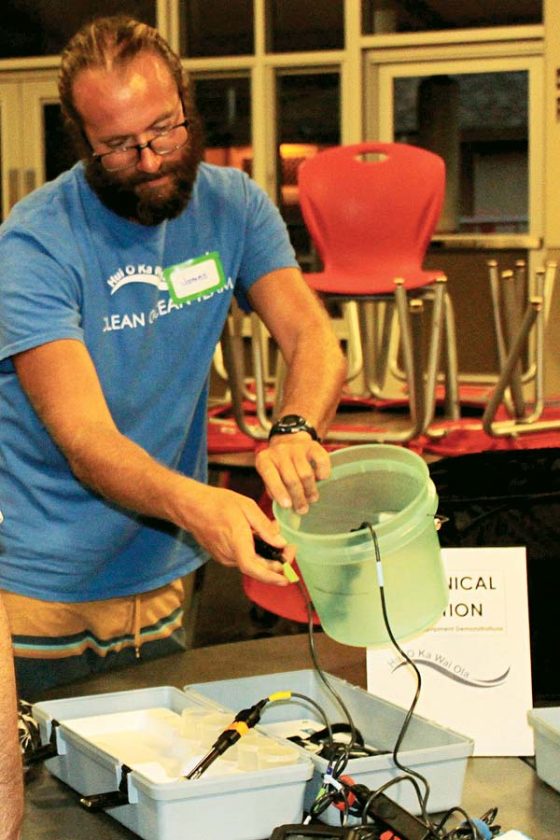 LAHAINA — All 19 sampled beaches in West Maui are “impaired” and exceed the state standard for allowable amounts of sediment and potentially harmful runoff nutrients in coastal waters, according to data collected by the Hui O Ka Wai Ola program.

The report by the volunteer group of shoreline water testers presented at a gathering Tuesday comes on the heels of a report for 20 South Maui sites in June. That report showed problems with turbidity and runoff nutrients, as well.

Turbidity is the biggest problem on the west side, followed by “really high nutrient levels,” the group reported. Water temperatures also are warming up to levels that could cause coral bleaching.

The hourlong presentation Tuesday night in Lahainaluna High School’s cafeteria included data collected from shorelines stretching from Honolua Bay to Papalaua. The goal of the Hui O Ka Wai Ola water sampling program is to reveal the true quality of the water and “accelerate positive change.”

“An incredible amount of interested volunteers have shown up for years now, and that is an integral part of gathering all that data,” said Alana Yurkanin of The Nature Conservancy, who’s also the communications and safety coordinator for the program. She noted that this is “the first citizen science-based water quality monitoring program like this in Hawaii.” 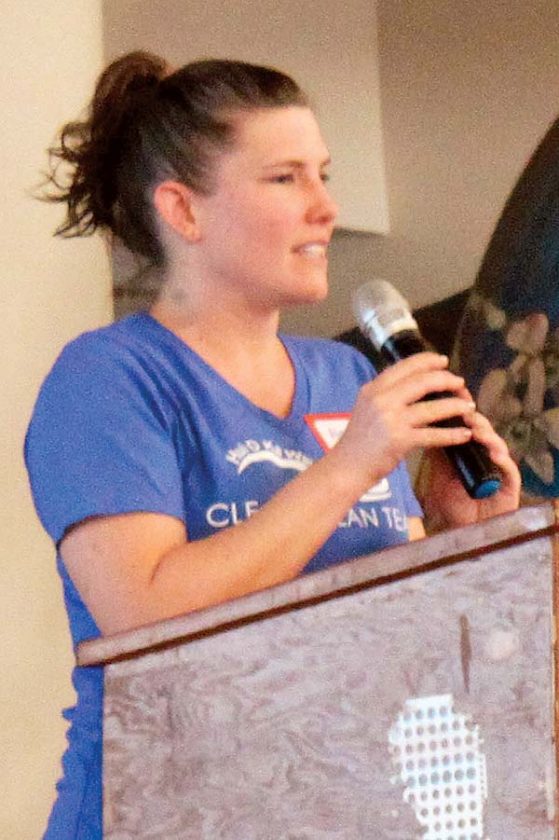 Samples from the west side have been collected every three weeks in knee-deep water for the past three years. All procedures follow the Quality Assurance Project Plan, which is designed to help Hui O Ka Wai Ola to replicate all Health Department procedures for water quality testing.

Chemicals tested for include ammonia, a wastewater marker, and phosphate and nitrogen, agricultural runoff and sewage markers.

The testing does not include bacteria levels in the ocean.

Turbidity is a measure of water clarity and covers the amount of sediment carried from land to ocean from streams, flooding and other runoff, Falinski said. 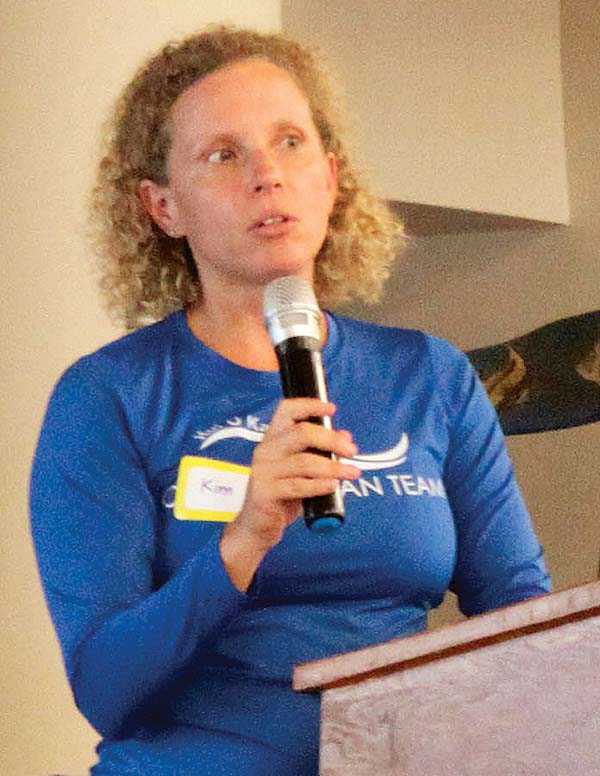 “According to the Department of Health, anything above 0.2 NTU (nephelometric turbidity units), the state says it’s impaired,” said James Strickland, program project manager. “Every single site we sampled exceeds the state standard.”

Beaches on the south side of Lahaina appear more susceptible to turbidity issues. Levels are typically lower in the summer but still can pose a threat to marine life year round, he said.

Kaopala logged the highest levels of turbidity, followed by Kahana and Honolua.

Nutrients, such as nitrogen and phosphorus, can indicate sewage pollution from runoff and can be linked to agriculture runoff, Falinski said. This can lead to an algae blooms, which can block needed sunlight from reefs.

“If you have a lot of nitrates in the water, then the reef itself can have too much micro or macro algae,” Falinski said. “If you ever see algae on the reef, chances are it will over-compete with the coral and suck up those nutrients faster. 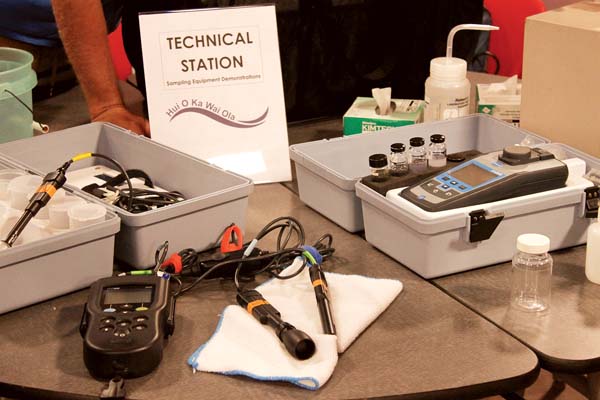 This is the equipment used by volunteers to test water quality at 19 beach sites in West Maui. Samples are extracted in knee deep water every three weeks.

“Or if you have a lot of nitrogen in the water, it can mean there is bacterial growth . . . Nitrogen can be the bacteria that will make the coral sick.”

Problems with nitrate levels are more prevalent in shorelines on the north side of Lahaina, particularly areas with more people and located near old agricultural land, the program reported.

“Even though we don’t have big agriculture anymore, we still have issues from the things left in the soil that still come out,” Strickland said. “The nitrate level (of Kaopala) is about 15 times what the state says is an acceptable level.”

The highest nutrient levels were at Pohaku Beach, Kapalua Bay and Canoe Beach.

“Once you get over 27 degrees Celsius (80.6 degrees Fahrenheit), that’s when the coral becomes stressed enough to release their algae and you have a bleaching event,” Strickland said.

This year, data show that temperatures already have surpassed the danger threshold.

“So, the question is, ‘are we on our way to another big bleaching event?’ ” he said. “Any one of our sites looks like that.”

In addition to the 20 South Maui sites, the group is in the process of adding two Maalaea sites for testing.

The program currently does not test for bacterial content in the water. The program hopes to begin testing for bacterial parameters, like enterococcus and clostridium, sometime this month in South Maui sites. These bacteria are indicators of what can make humans sick.

“You really can’t measure a bacteria very well in the ocean because there’s a lot of bacteria,” said Falinski. “But these indicator bacteria . . . represent how much sewage input you might have to the site or how much bacteria you might have.”

The program does not measure for heavy metals, pesticides, radiation, sunscreen chemicals and pharmaceuticals because they are costly, difficult to detect and require advanced equipment and procedures, program officials said.

All parameters that are analyzed help the Hui O Ka Wai Ola program to take the next step in determining the exact sources of the problem.

“Of course, it’s not just about finding the problem, it’s about dealing with them,” said Tova Callender, coordinator of West Maui Ridge To Reef Initiative. “We need to leverage everyone else in the community to actually address what we find as problems.”

Solutions to the problems were suggested Tuesday. They included adding more trash cans and bathrooms or port-a-potties at different sites to reduce the amount of waste that enters the shoreline. Also, from a land-use perspective, slowing runoff flow, for example with reservoirs, would reduce the amount of sediment getting into the ocean, Falinski said.

Monitoring one site costs around $4,000 a year or about $300 a month. One lab test for one water quality sample is $50, which is why the program relies on donations and funding from the community, local businesses and the county, according to Callender.

“The quality of our water equals the quality of our life,” Yurkanin said. “It not only impacts humans, but it also impacts our ecosystem, which is really important to all of us . . . We are surrounded by coral reefs.”

The volunteer-based program is co-managed by Maui Nui Marine Resource Council, The Nature Conservancy and West Maui Ridge to Reef Initiative and collaborates with the Health Department Clean Water Division.

To learn more about the program and its data and how to donate or volunteer, go to www.huiokawaiola.com.