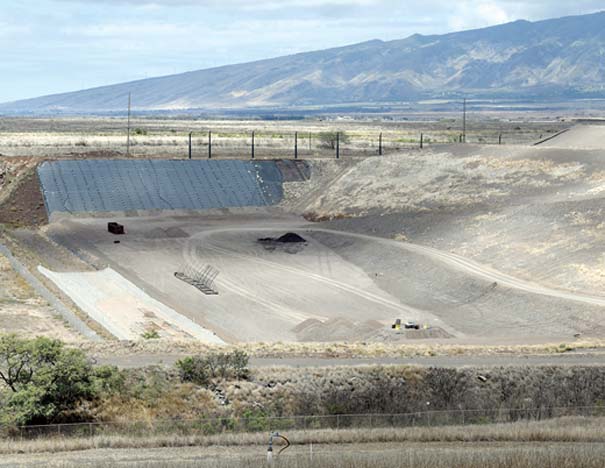 With a Central Maui Landfill expansion project receiving a finding of no significant impact for its environmental assessment, the next area at the landfill scheduled to be utilized is lined and ready to go. It rests between the most recent mound of trash being topped off (right) and a parcel of privately owned land (left). -- The Maui News / MATTHEW THAYER photo

Waste-to-energy company Anaergia has a deadline of June 30, 2020, to execute a contract with Maui Electric Co. for electricity or renewable gas from Central Maui Landfill refuse.

In 2014, Anaergia entered into a contract with the county, under former Mayor Alan Arakawa. The county had selected Anaergia following a request for proposals to finance, plan, design, permit, construct, own, operate and maintain an integrated waste conversion and energy project on privately owned property near the Central Maui Landfill. The company formed Maui Resource Recovery Facility to handle the project.

According to the agreement, the facility was intended to receive and convert waste and landfill gas into fuel, renewable energy or other marketable commodities that would divert a significant portion of waste from the landfill.

It has been a slow process for Anaergia, which has not built major facilities at the landfill. This has frustrated community and council members. Some members at Tuesday’s meeting even raised the possibility of canceling the contract. 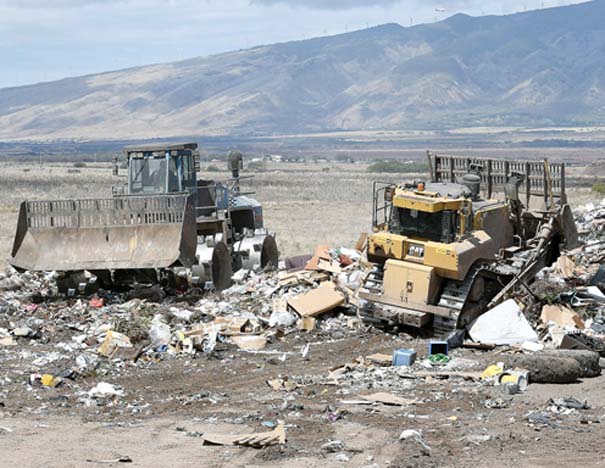 On Friday morning, Ka’ala Buenconsejo, business development director for Anaergia, said the company is waiting for the issuance of a request for proposals for renewable energy projects from Hawaiian Electric Co., which includes subsidiary Maui Electric Co.

MECO will be seeking 295 gigawatt-hours of renewable energy and 58 GWh a year of power storage in this round of proposals.

Anaergia is in contact with a solar company with which it could partner for the RFP, but the company still is reviewing proposals, Buenconsejo said. He did not go into detail about the arrangement with the solar company and Anaergia’s role in providing power to MECO.

At Tuesday’s meeting, Baz said there are other “interested parties” who could provide other waste diversion options if Anaergia doesn’t deliver.

Environmental Management Director Eric Nakagawa said in April that a contract amendment with Anaergia, executed in late 2018 with Arakawa still in office, extended deadlines for permitting, approvals and energy agreements to mid-2020.

As Anaergia works on its contract, the county is moving ahead with its 41-acre expansion at the Central Maui Landfill. The goal of the project is to reduce solid waste going into the landfill to extend its life, a study said.

He said funding for the project is in the current budget and that the expansion plans are required whether or not Anaergia executes its contract.

“However, if Anaergia’s project becomes operational, it will divert roughly 80 percent of the waste streams to the landfill, which will significantly extend the life of the landfill expansion,” Nakagawa said.

Per the current contract, Anaergia’s facility will be located on privately owned property in the vicinity of the Central Maui Landfill, Nakagawa said. Buenconsejo said separately that the company has not yet secured land near the landfill but intends to do so in the future.

The expansion is contiguous to the landfill, which first opened in 1986, and runs along Pulehu Road on the makai side of the landfill. The 40.8-acre project will be built on 180 acres of county-owned land in the area, of which 136 acres currently is being used for the landfill, the report said.

The committee took no action and deferred the item.