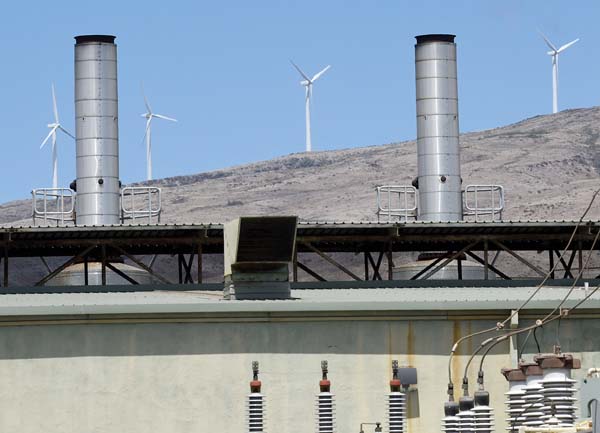 KAHULUI — In a darkened room of Maui Electric Co.’s dispatch center, a glowing board depicts the lifeblood of electricity flowing across Maui.

This, essentially, is the grid — a series of interconnected lights and lines showing MECO’s power plants, substations and transmission lines. The red lights indicate where energy is flowing, the green lights where it’s not. (“They tried to get us to change our color, but it’s been that way since like the first control site,” said Chris Reynolds, director of operational technology.) At the same time, digital readouts display the real-time output of wind and solar farms.

Over the next several years, tiny lights on the board will indicate major changes. As a decades-old power plant goes dark on the map, lights will brighten elsewhere — like in Central and Upcountry Maui where two major solar projects are planned. The board is a simple way to keep track of the complicated transition MECO is making from fossil-fueled power plants to renewable energy.

“We’re trying to prepare for the future, but not too fast and not too slow,” MECO spokeswoman Shayna Decker said Wednesday during a media tour of MECO’s facilities. “Because if we do invest too much at this time, technology that might be proven five, 10 years from now might be the diverse answer.”

As MECO prepares for its next big push that could send it past 80 percent renewable energy, changes already are underway within its major power-producing facilities. 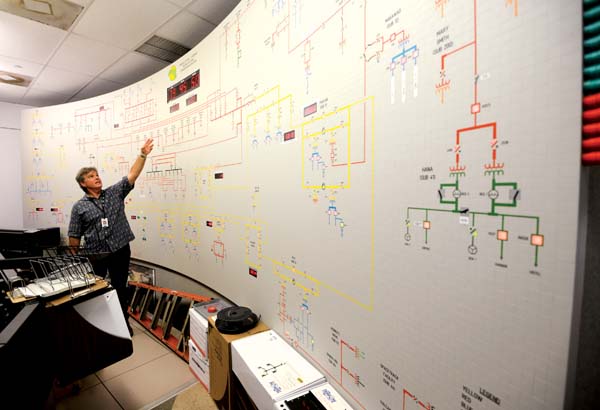 Maui Electric Co. Director of Operational Technology Chris Reynolds explains the workings of the Transmission Room in Kahului on Wednesday morning. The series of interconnected lights and lines show MECO’s power plants, substations and transmission lines. The red lights indicate where energy is flowing, the green lights where it’s not. -- The Maui News / MATTHEW THAYER photo

Tucked behind a thicket of kiawe trees just off North Kihei Road is the Maalaea Power Plant, a major component of MECO’s operations.

Maui County has a total of 46 units (an engine and a generator), and 21 of them are at Maalaea. With 212 megawatts of generating capacity, the plant can cover 80 percent of the island’s needs, though how much it actually provides depends on the time of day as well as production from other sources.

In the plant’s control room, a series of computer screens and dials offer a glimpse of how MECO balances the “firm” energy produced from generators and the variable energy produced from wind and solar. The computer system is constantly communicating with sources across the island, tracking how much energy is being produced in real time from all rooftop solar and the Kaheawa and Auwahi wind farms.

“It’ll tell units to go up if you need more generation or go down if you need less,” explained Mat McNeff, director of Maui County for MECO. “All the generation needs to be balanced with the load at all times. It’s not really incorrect to say when you turn on a light at your house, that a generator in some small way rises to meet that load to generate that electricity.”

Decker said that it was a learning curve when the wind farms first came online, because MECO had to adjust to “seeing the wind drop in a second.” The utility has made changes to generating units over the years to make them more responsive and able to step in when “as-available” energy, like wind and solar, can’t.

Both MECO and its renewable energy partners have learned to be more in sync on the dance floor. When the first wind farms came online, they didn’t require batteries. The 30-MW Kaheawa Wind Power I, which began operating in 2006 above Maalaea, doesn’t have one, and McNeff said that was OK “because relative to everything else, it’s not that big.”

But as MECO brings more renewables on, batteries have become a must, because “you need that system to help out with the grid support more and more.”

The 21-MW Auwahi Wind Farm in Ulupalakua didn’t require a battery when it first came online in 2012, but MECO did have standards for “how quickly the facility could go up and down.” 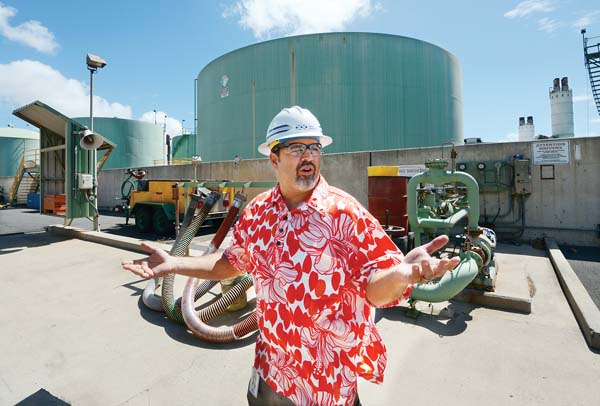 “They couldn’t meet it, so they put in their own battery to help those requirements,” McNeff said. “And that’s different than nowadays where we’re pretty much requiring the facilities to have a battery. It’s not the result of the performance standards; it’s something we need now.”

The newest facilities are required to have four hours of storage. For example, the recently approved 60-MW Kuihelani Solar project, which is expected to go online by 2022, needs to be able to store 60 MW for up to four hours. (The project includes a 240-megawatt-hour battery storage system.)

“Now, it’s not so much for mitigating ups and downs, but now after the sun stops shining, you can actually keep generating,” McNeff said. “Or if there’s an emergency on the grid and we suddenly need more generation, that battery can come in to support.”

McNeff said that the push toward more renewables “will change the dance.” As part of its next phase of renewable energy integration, MECO is seeking 40 MW of power to replace the 37.6-MW, oil-fired Kahului Power Plant, which was built in 1948, that it plans to retire by the end of 2024.

MECO doesn’t have any plans to retire the Maalaea plant, which was built in 1971, and even after making the switch to 100 percent renewables, it may still need it. 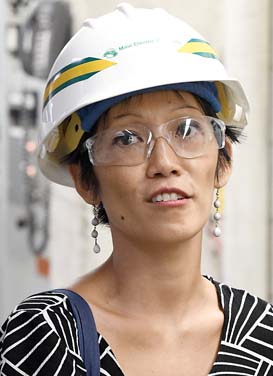 “As more renewable energy projects come online, at certain times we may be able to run less of our traditional generating units that are using fossil fuels,” Decker said in an email Thursday. “With intermittent renewables like wind and solar, our island still needs backup generation — say on days when the wind is not blowing or it’s cloudy — so generating units at the power plant are still necessary. However, it may be that these units are running on biofuels in the future.”

The Maalaea plant already uses biofuel to start up and shut down two of its units, McNeff said. In 2007, MECO tested the five different types of engines at the plant on 100 percent biofuel.

“All those units can run on biodiesel,” McNeff said. “So if we wanted to, we could be 100 percent renewable today.”

But, he added, “all those things have a cost,” and biodiesel is more expensive. So for now, the plant just uses it for startup and shutdown.

As for how everyday jobs will change at the plant as MECO makes the move toward renewables, Decker said that “we are looking at different trainings and new opportunities within our companies.” 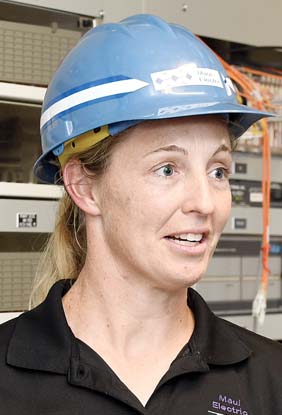 While the internal workings of its plants and substations may change, MECO still needs the hardware to deliver electricity to homes.

“Going to renewables, we’ll still need substations,” Decker said. “We’ll still need the poles and the wires because (electricity) needs to be delivered to the people.”

MECO’s newest substation is located on 3 acres at the intersection of Kuihelani Highway and Maui Lani Parkway. It’s the cleanest and most state of the art, relying on digital tech and fiber optics over the analog tech and copper wires of older substations. It’s also on a bigger property and has the flexibility to add components like solar, battery storage or biomass generating units.

At its basics, “a substation is a substation,” said Emily Smith, engineering project manager for MECO. But the Kuihelani substation was designed with growth in mind.

Currently, there is one unit (at substations, this means a transformer and switchgear) on site, but there is room for four units total. When the new 60-MW solar project comes online up the road, the engineers may decide to install another unit at the Kuihelani substation.

Substations, which reduce voltage so electricity can be safely sent into homes, still will be needed in the future, but their roles will just be a little different.

“Traditionally, power was always created in one place, and it just flowed down,” Smith said. “But nowadays, we have the generation station, we have solar farms, we have solar on top of people’s houses. We have power coming from all over the place. . . . So now substations have power flowing two ways instead of only one.”

Smith said that the only way she can imagine substations no longer being needed is if every house had a battery or power-producing source of its own.

“At least right now, it’s just expensive,” Smith said. “And even if you had that, it’s nice to be connected to a big grid, because once in awhile . . . you don’t always need all the power you (have), so maybe you can share it.”

“It’s hard for me to see a world without substations.”

Next round of renewables

MECO is in the midst of its next big push toward renewable energy. In its first phase, it landed two grid-scale solar projects — the 60-MW Kuihelani Solar and the 15-MW Paeahu Solar with 60 MWh of battery storage on Ulupalakua Ranch land.

As part of Phase 2, MECO is seeking 295 gigawatt-hours of renewable energy (295,000 MWh) and 58 GWh a year of power storage. MECO’s parent company, Hawaiian Electric Co., filed a final draft of its request for proposals with the Public Utilities Commission earlier this month and is awaiting approval.

McNeff said the utility doesn’t specify what type of renewable project it wants to see, only how much energy it needs. To give an idea of how big the project could be, McNeff explained that if it were a solar farm producing that much energy, it would take up about 700 acres, roughly the size of 14 War Memorial Stadium complexes.

He said the second phase could take MECO up to 80 percent renewable energy, maybe even close to 100 percent.

But just as it does with the renewables it currently uses, MECO must learn to dance between the technology that’s available now and the future it must prepare for.

“We have several wind farms on the island, and some were contracted over a decade ago,” McNeff said. “At the time, the pricing we got was really good for those facilities and showed based on our forecast that everyone would save money. But if you compare them to what we’re getting renewable energy for now, they’re high.”

MECO is paying 12 cents a kilowatt-hour for wind power. The power purchase agreement with Kuihelani Solar calls for the utility to pay 8 cents a kWh.