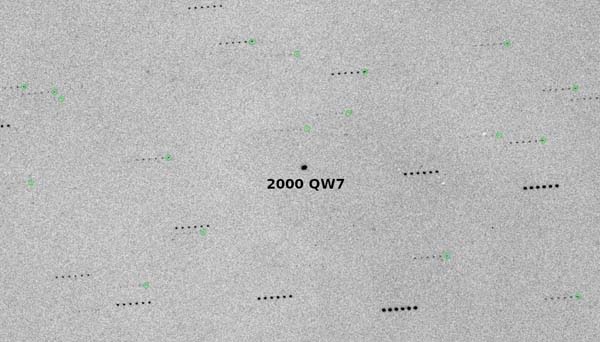 2000 QW7, an asteroid with an estimated diameter the length of the Empire State Building, zoomed about 14 lunar distances away from the Earth just before midnight Saturday. The image was created by J.D. Armstrong, who is the Maui technology education and outreach specialist at the University of Hawaii’s Institute for Astronomy, and by Iao Elementary School student Lento Ban. The dot is created by a stacking of images, and stars are streaked and appear as a dotted line, explained Armstrong. The image was taken by the Las Cumbres Observatory, which includes the Faulkes Telescope North atop Haleakala, and another telescope in South Africa. The 2000 QW7 image was captured in South Africa, but the Faulkes Telescope North allowed Maui County students access to live views streamed to their computers. University of Hawaii Institute of Astronomy photo

Although unseen by the naked eye, asteroid 2000 QW7, with an estimated diameter of 1,640 feet or roughly the height of the Empire State Building and a “pretty big” near-Earth object, passed by the planet late Saturday night.

The large, but somewhat slow-moving asteroid, traveled around 14,300 mph and passed about 3.3 million miles from Earth, not close enough to worry astronomers.

According to NASA, 2000 QW7 was first discovered Aug. 26, 2000, by the Near-Earth Asteroid Tracking (NEAT) program atop Haleakala. The asteroid has not visited Earth since then, and won’t make another approach until 2038, according to the website space.com.

While asteroid 2000 QW7 was “quite big,” it didn’t come close enough to Earth’s orbit to cause concern, said UH astronomer Richard Wainscoat. The asteroid was not projected to enter Earth’s orbit or collide with the planet.

“It’s pretty big, but it’s quite a ways away,” said Larry Denneau, software engineer and co-manager of the ATLAS project, which has telescopes on Haleakala and Mauna Loa that scan the entire sky every two nights for objects that could impact Earth.

“We are looking for things that are on their final approach or near-miss of the Earth. Around the moon’s orbit is our territory,” he said.

Denneau said that ATLAS, a University of Hawaii project funded by NASA, was created in 2013 to find “death plunge,” or impacting or near-impacting objects, and became operational atop Haleakala in 2016.

“In 2020, there will two more telescopes in the southern hemisphere, and we will be able to scan the entire night sky in a single night,” said Denneau, who has been working with the ATLAS project for six years and in the asteroid business for 15 years.

Another telescope atop Haleakala, PanSTARRS, also helps detect near Earth objects. The telescope that takes a wide view, 1,000 square degrees of the sky each night, identified the first interstellar object ‘Oumuamua in October 2017.

2019 OK came about 0.19 lunar distances away or 45,400 miles away. The asteroid traveled at a rate of about 54,000 mph just outside the geostationary satellite belt, he said.

The telescopes on Haleakala could not detect 2019 OK because of its straight line trajectory for Earth. The asteroid’s speed and the light of the full moon, which passed in front of the asteroid and created light interference, made the object difficult to track, he explained.

“This object reminds us that discovery of near-Earth asteroids is not easy, and it will take many years to complete our inventory of asteroids that come close to Earth,” Wainscoat said.