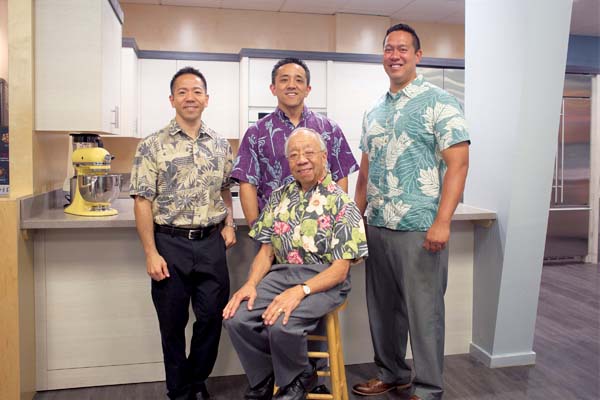 Hamai Appliance CEO Clyde Hamai (center) is flanked by the next generation of family members, who in the future will take over the 50-year-old family business in Kahului. Shown (from left) are Hamai’s sons, Garret Hamai, vice president of the company; Bryant Hamai, president; and Clyde Hamai’s nephew, Keli‘i Wunder, vice president. Hamai family photos

KAHULUI — As small mom and pop shops wither away and large chain stores come and go, locally owned Hamai Appliance has weathered the storms of ever-changing consumer markets and unstable economies for 50 years.

“You have to adapt to the market changes. That’s what I attribute to our existence,” said Clyde Hamai, CEO of the company his late father Lester, founded in 1969.

Over the years, the appliance store along Wakea Avenue in Kahului has fought off challenges by Big Box stores and a plethora of other businesses selling electronics and other gizmos. The survival tactics employed by the family-run business included joining a national group that negotiates lower prices with manufacturers, offering repair services for products they sell and providing quick delivery of appliances in stock.

In fact, “we are doing the best now” saleswise, Hamai said. He attributed some of the uptick to the “three young boys working.”

Those “boys” are the next generation of Hamai Appliance. They include Hamai’s two eldest sons: Bryant, 38, who is president of the company; Garret, 41, who is vice president; and Hamai’s nephew Keli’i Wunder, 40, also a vice president. 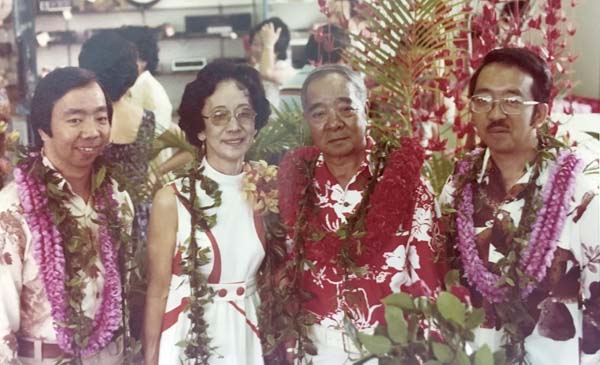 The late Lester Hamai (second from right) founded Hamai Appliance in September 1969. The business is celebrating its 50th anniversary this year. Shown in this photo (from left) of the grand opening of its second and current location in Kahului are Lester Hamai’s son Clyde Hamai, current CEO; wife Clara Hamai; and son Glenn Hamai, who retired in 2013.

The elder Hamai believes that small businesses can succeed today on Maui.

“You can survive. You got to give good service to the customers. You create local loyalty,” Hamai said.

He also believes in the mantra, “Buy local.”

To celebrate the 50th anniversary of the business this month, there will be promotions and specials through the end of the year, including a trip to Las Vegas giveaway.

In November, the store will be packing 10,000 meals as part of the No Child Hungry Program, an effort by the Nationwide Marketing Group, the largest appliance buying group in North America that Hamai has been part of for more than 20 years.

Hamai Appliance was born in September 1969. Lester Hamai, with $20,000 in his pocket, left his appliance sales position at A&B Commercial after 33 years. The late Kenji Yamada and George Harima, appliance and television repairmen, put their faith in Hamai and followed him.

Hamai described his father as brave and compassionate.

As his father contemplated a career change, Lester Hamai considered selling insurance, opening up a restaurant or selling appliances.

He chose the latter.

Lester Hamai’s wife, Clara, taught herself how to type and became the store’s bookkeeper.

“He was very compassionate to his workers and his customers. That’s why he built a good loyal, local following,” Hamai said.

He recalled a story of how his father wrapped and personally delivered an electric can opener — new at the time — to friend Andy Hirose on Christmas Eve. Hirose, who called the elder Hamai for a gift for his wife, was unable to pick up the can opener in time for closing, so Lester Hamai made sure it reached the household.

He could be stern, too, to his employees and children. “With five kids, you got to be stern,” Hamai said.

Lester Hamai also was community-minded. He was a longtime Boy Scout leader and president of Makawao Hongwanji Mission for 13 years.

The founder of the company died in 1986.

Clyde Hamai, in his 20s when the store opened, returned to Maui after graduating from the University of Hawaii at Manoa.

“I can remember telling my dad, ‘I’ll only be here for a year or two, then I plan to go back to the U for my master’s degree.’ “

“It’s hard to leave when your relatives and friends are all pitching in during their spare time, helping as delivery and warehouse men and also when so many people want to come and help,” he said.

Throughout the years, family members, including Lester Hamai’s brothers and sisters and their children, all worked or volunteered time at the store. This included handling sales or gift wrapping during the holidays.

A couple of years after the store’s opening Glenn Hamai, Lester Hamai’s eldest son, left his position at A&B’s corporate office on Oahu to join his family back on Maui. Glenn Hamai, who was vice president, retired in 2013.

Hamai Appliance’s first location was along Hana Highway, where 24 Hour Fitness currently is located. Then in 1977, Hamai Appliance relocated to its current site along Wakea Avenue.

“I can recall having over a thousand people attending and catching good luck mochi thrown from our roof,” Hamai recalled of the grand opening. “There were flowers everywhere in the store.”

The family owns the property, a cost the company could control and a security in times of rising lease rents.

Hamai Appliance opened a Lahaina location in 1990 to make it easier for their west side customers to shop with them. The first location was along Honoapiilani Highway, then it moved to near the old Foodland along Wainee Street.

But the Great Recession hit and the Hamais learned that many people were coming to Central Maui to shop. The store closed in 2008.

When Lester Hamai opened the store a half century ago, it only sold two brands, GE appliances and Panasonic electronics. For many years, the store’s sales were about 50 percent electronics and 50 percent appliances.

But as electronics filtered into Maui and were being sold at lower prices everywhere, especially with the arrival of Big Box stores like Kmart and Walmart, Hamai Appliance stopped carrying their popular cassette and DVD players, and transistor radios.

Hamai Appliance still has factory-trained technicians on staff who repair what the store sells, which sets them apart from their competitors, Hamai said.

The service aspect has made the company popular with off-island condominium owners. In the past two to three years, there has been growth in appliance buys from condominiums and small housing developments, he said.

“You want to make sure someone can take care of your appliances when you are not here,” Hamai said.

And they keep their warehouse stocked to avoid waiting for orders to be shipped from the Mainland.

In the five decades, Hamai has not only seen the business change but the developments in technology and consumer products. He remembers selling one of the first video home system (VHS) video cassette recorders on Maui and being the first to display a high definition picture on its Panasonic HDTV.

There were 22-pound video camcorders and the fax machines.

“My sons don’t know what I’m talking about when I tell them about all these advanced electronics that I sold,” Hamai said.

Another changing of the guard

About 10 years ago, Clyde Hamai and brother Glenn considered closing the business and retiring. Their children lived on the Mainland and were not returning home, leaving no one to carry on the business — a fate common to beloved mom and pop stores.

The strength of family pride and continuing the legacy would emerge in the younger Hamai. There is a pattern in the new Hamai generation, who cut their teeth in business elsewhere, and worked their way up the ranks in those companies.

Clyde Hamai’s eldest son, Garret, who was living in Japan, came back to Maui in 2006 and worked for seven years with his dad and uncle, automating and modernizing the store’s systems.

Garret Hamai returned to Japan in 2013 as other family members were returning to the business. Around 2017, he left his controller job in Japan at the clothing company Zara to help lead the family business.

He said that he had a chance to see the world but wanted to return home to be with family. “It’s a nice place to be,” he said Wednesday in the store.

He wants to see the family business continue.

“There was that pride,” he said.

“That’s why I’m still here, in the office, I got to work,” said Clyde Hamai as the business transitions.

“When your name is on the door, you want to make sure it continues,” he said.

Dexter Kaiama joins demonstrators gathered to block a road at the base of Mauna Kea in this photo taken July 15. The demonstrators are attempting to block construction of the $1.4 billion Thirty Meter Telescope at the summit of Hawaii’s tallest mountain. AP photo

The sun sets behind telescopes at the summit of Mauna Kea in this photo taken in July. AP photo

West fostered a mother and seven puppies for eight weeks — all were adopted through MHS or Wings of Aloha. Photo courtesy Jamie-Sue West

Pono, a Wings of Aloha foster, joins Jamie-Sue West and Monroe for a hike before flying to the Mainland for his forever home. Photo courtesy Jamie-Sue West

Candy is a model dog for one of MHS’s foster campaigns. Photos courtesy Maui Humane Society

Baldwin High School’s Kapena Kamai dives for a touchdown while being tackled by King Kekaulike’s Thor Ventura in the second quarter of the Bears’ 24-21 win over Na Alii on Friday night at War Memorial Stadium. The Maui News photos

King Kekaulike’s Trey Hunter runs in for a touchdown next to blocker Kali Kuhaulua in the second quarter.

No one was injured in a fire at a Waiehu Terrace home Thursday night, but the family dog died. Maui Fire Department photo

National Oceanic and Atmospheric Administration Fisheries officials came to the aid of 10 pygmy killer whales that beached themselves at Sugar Beach on Aug. 29. The Maui News / MATTHEW THAYER photo

Hamai Appliance CEO Clyde Hamai (center) is flanked by the next generation of family members, who in the future will take over the 50-year-old family business in Kahului. Shown (from left) are Hamai’s sons, Garret Hamai, vice president of the company; Bryant Hamai, president; and Clyde Hamai’s nephew, Keli‘i Wunder, vice president. Hamai family photos

The late Lester Hamai (second from right) founded Hamai Appliance in September 1969. The business is celebrating its 50th anniversary this year. Shown in this photo (from left) of the grand opening of its second and current location in Kahului are Lester Hamai’s son Clyde Hamai, current CEO; wife Clara Hamai; and son Glenn Hamai, who retired in 2013.

Moreira “Mo” Monsalve, 46, has been missing since Jan. 12, 2014. On Friday, her ex-boyfriend, Bernard Brown, was indicted for her murder.

Moreira “Mo” Monsalve and Bernard Brown appear in a photo taken from a poster focusing on Monsalve’s disappearance on Jan. 12, 2014. Brown was indicted for murder in her death Friday and has been taken into custody in Northern California by local police and the FBI.

Black Olive has a can-do spirit that’s sure to steal your heart! Ruby Hernandez photo