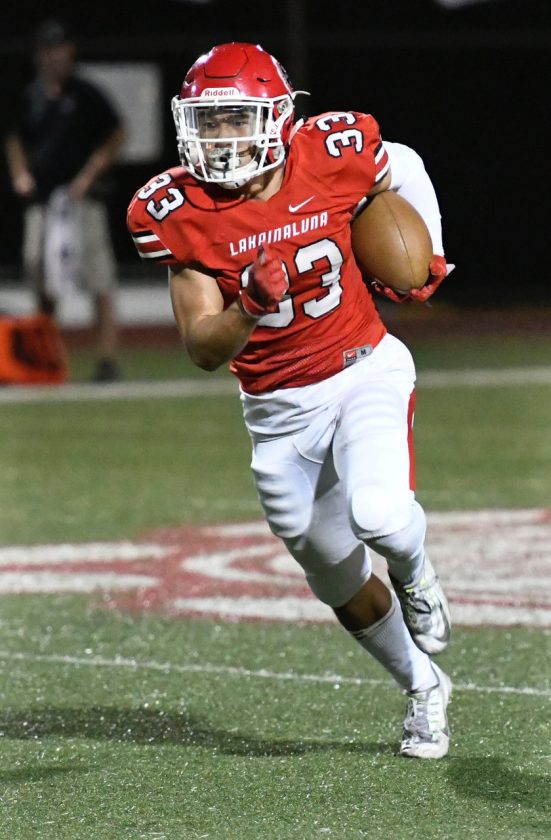 LAHAINA — This one was clearly over at halftime, but it served as a solid warmup for the Lahainaluna High School football team.

The Lunas can expect the No. 1 seed when the state brackets are released and a home semifinal on Nov. 23 against the winner of the play-in game between the No. 4 seed and Oahu Interscholastic Association runner-up Roosevelt.

The state finals are Nov. 29 at Aloha Stadium.

“Definitely, we have got to keep the kids motivated — I mean it’s going to be a long, long drawn-out three or four weeks,” Lahainaluna co-head coach Dean Rickard said. “But, you know, get back to basics and take it a little bit slower for the first couple of weeks. 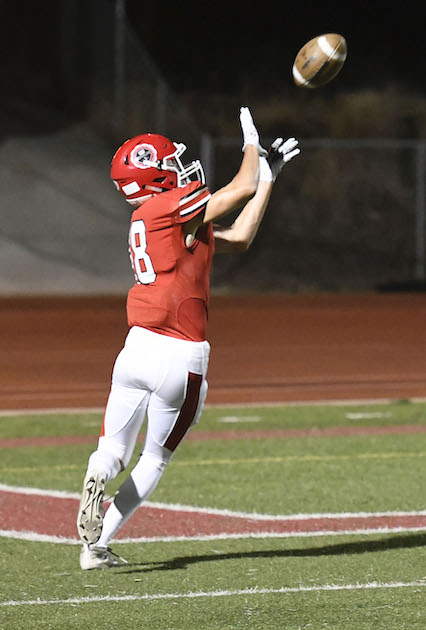 “Heal up the wounds, work on some of the mistakes that we saw tonight, especially with the penalties. Way too much penalties. Break down some film and keep the kids always mentally prepared and focused on the task at hand.”

Lahainaluna senior running back Joshua Tihada, already the all-time leader in state tournament touchdowns with 15, broke the MIL single-season touchdown record with three scores in the first half, giving him 17 for the season. The old mark of 16 was shared by Maui High running back Naia Nakamoto (2018) and Baldwin wide receiver Chase Nakamura (2006).

“I think we all realized that when Joshua started four years ago — he has been part of this program with the Big Boys — and we knew that he’d be a special player,” Rickard said. “He’s dedicated himself to this sport, he’s dedicated himself in the offseason, committed himself. So all the accolades that come with it, it’s well-deserved because of the fact that he did put in the work. This is just the rewards from it. Again, can’t say enough. If we could have numerous Josh Tihadas we would be totally happy.”

The Lunas scored 21 points in each of the first two quarters to take total command into the locker rooms at halftime. They added the final tally of the night on a 21-yard run by Sky Smith with 6 seconds to play. 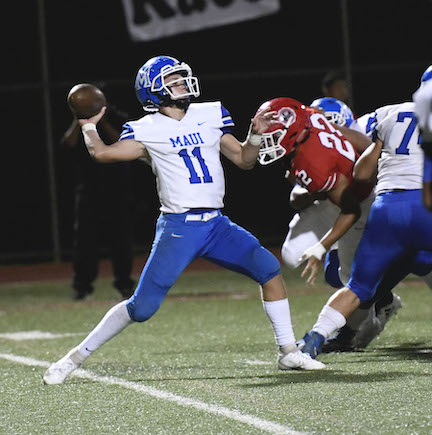 Kai Bookland started the onslaught with a 24-yard catch of a scoring pass from Esekielu Storer just 74 seconds into the game. The two-play, 35-yard drive was set up by a 25-yard punt return by Tre Rickard.

The next time the Lunas had the ball they went 71 yards in six plays, boosting the lead to 14-0 on a 9-yard run by Tihada with 6:20 to go in the first quarter.

Treven Tihada — Joshua’s cousin — scored on a 4-yard run with 3:26 left in the first quarter. That touchdown capped as seven-play, 63-yard drive that included a 37-yard Storer strike to Brian Sandoval to the Maui High 14-yard line.

Joshua Tihada scored on a 9-yard run on the first play of the second quarter to boost the lead to 28-0. That finished a six-play, 72-yard drive that included a 53-yard pass to Bookland.

Sabers coach Rodney Figueroa tipped his cap to the Lunas.

Maui High’s MIL season ended at 0-8 after opening the year with a 20-19 win over Kauai on the Garden Isle. Injuries plagued the Sabers all season, but Figueroa was happy with the way his players responded in the final week of the year. The Sabers were outscored 256-81 by league opponents, including 97-0 in two games by the Lunas.

“These guys did a great job, the seniors that stepped up when all the injuries happened and they plugged away with all these youngsters that we have,” Figueroa said. “We brought up a couple from the (junior varsity) and we plugged them right in and they played. The future is going to look good when we’ve got a lot of youngsters playing this much. … Just proud of the seniors.”

Figueroa has been the head coach for the Sabers since 2017, although he stepped back to defensive coordinator last season as he battled health concerns.

When asked if he plans to be back next season, Figueroa said: “So far, yeah.”