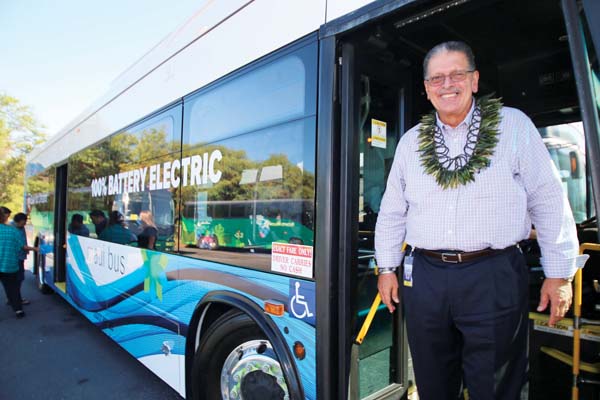 The K9MC zero-emission bus, built by Build Your Dreams, will be running on Central and South Maui streets through late December. Mayor Michael Victorino and officials with the state and other counties got a look at the all-electric bus last week. -- County of Maui / ALAN FUKUYAMA photo

A 100 percent electric bus will be running on Maui Bus routes in Kahului, Wailuku and Kihei through late December as part of a pilot partnership program.

“We are very excited to start this partnership with BYD to show our community that the department is striving to be the first island to integrate zero emission buses into its fleet,” Transportation Department Deputy Director Michael Du Pont said in a news release Tuesday.

The department held a ride-and-drive last week for Mayor Michael Victorino and officials with the state and other counties. DuPont recently returned from a 12-day trip to conferences in Indianapolis and California that focused on zero-emission-bus purchasing and to California for visits to transit agencies that currently run these buses in their active fleets.

Depending on size and other factors, a zero-emission bus can cost between $500,000 and $1 million, said county spokesman Chris Sugidono. The department is currently working with the state on a federal grant that will help subsidize zero emission bus purchases.

County officials have said that current petroleum-powered buses cost about $600,000.

“With the signed commitment to transform Hawaii’s public ground transportation to 100 percent renewable fuel sources by 2035, the county expects to see a increase in electric buses in the near future,” Sugidono said.

He said the department is in early discussions with a outside entity to utilize solar power to possibly charge the electric buses.

The K9MC, built in the Build Your Dreams Lancaster, Calif., plant, takes three to four hours to charge and utilizes a fast charger, Sugidono said.

Electric buses have been tested on Maui before. In April 2018, a Proterra Catalyst all-electric bus did a three-day test run without passengers.

“Technically, we did test 100 percent electric buses in the past, but not for an extended period of time . . . and weren’t really placed in service,” Sugidono said. “This time around, this BYD bus will be utilized for a few months in revenue service.”