Officials hopeful that remaining birds will survive in reserve 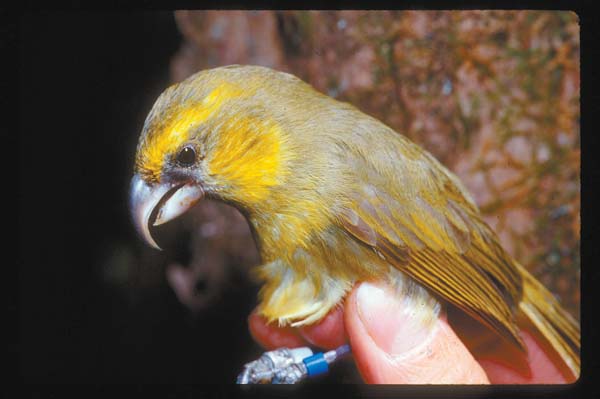 The critically endangered kiwikiu, or Maui parrotbill, is pictured. In October, 13 kiwikiu were transported to the leeward slopes of Haleakala in hopes that they would mate and help boost the species. Nine of them have died, possibly from avian malaria, the state Department of Land and Natural Resources said Tuesday. National Park Service photos

Nine of the 13 critically endangered kiwikiu who were brought to the leeward slopes of Haleakala last month have died, possibly from avian malaria, according to according to the state Department of Land and Natural Resources.

The kiwikiu, or Maui parrotbill, were transported to the state’s Nakula Natural Area Reserve in hopes that they would breed and help boost the dwindling species. However, officials involved in the bird relocation project say they’re not giving up and are hopeful for the survival of the remaining birds.

“I am still hoping that the four that are out there are going to do great,” Hanna Mounce, project coordinator for the Maui Forest Bird Recovery Project, said Tuesday. “The bottom underlying thing of all of this is, we’re losing the birds on the windward side (of Haleakala). They are dying. They are going extinct, and there’s nothing we can do right now with the current tools that we have available to us to prevent that from happening.

“Moving them to Nakula seems really risky and bold . . . but we’re hoping that’s going to give them a better chance when we know exactly what’s going to happen when we leave them on the windward side,” Mounce explained.

The kiwikiu is part of the Hawaiian honeycreeper family and was once found all over Maui and Molokai. Now fewer than 300 are estimated to exist, largely within the Hanawi Natural Area Reserve, Haleakala National Park and The Nature Conservancy’s Waikamoi Preserve, according to the Maui Forest Bird Recovery Project. 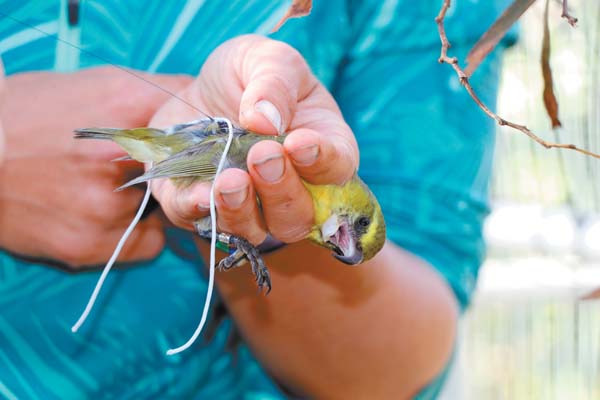 A kiwikiu is equipped with a radio transmitter so researchers can track it through the reserve.

The brown-and-yellow birds face the threat of habitat destruction by humans and feral pigs, predators such as wild cats and mongooses and avian disease spread by mosquitoes.

On Maui, conservationists have been working to restore the native forests that provide habitats for these birds. Over the past decade, more than a quarter million native trees have been planted in the Nakula reserve on the leeward slopes of Haleakala, as well as in the adjacent Kahikinui Forest Reserve to repair decades of habitat destruction caused by overgrazing by hooved animals like goats, cows and sheep, according to a DLNR news release.

Last month, 13 kiwikiu were transported to Nakula – seven who were captured in the wild in the Hanawi reserve, and six who were reared in captivity at the Maui Bird Conservation Center. They were given thorough veterinary examinations to make sure they could handle the cross-mountain transfer. Once they were moved to Nakula, the birds spent 10 days in aviaries in a small area in the southwestern corner of the reserve.

Before releasing the birds, researchers outfitted them with tiny radio transmitters that would help track their movements.

Mounce said the deaths didn’t happen all at once. Some of the birds died in the aviaries. Others showed signs of illness and were flown out of the field for treatment but subsequently died. With the help of the radio transmitters, researchers were also able to determine when birds stopped moving and track them down to confirm they had died.

In total, five of the captive-raised birds and four of the wild birds died. Mounce said the captive birds were taken to Nakula on Oct. 10, and the wild birds on Oct. 17, so the former had more time to be exposed to diseases. Because some of the younger wild birds died first and the surviving birds are all “after second-year adults,” Mounce said that could be a sign of different tolerance levels, but they can’t know for sure.

The final necropsy is pending, but preliminary tests suggest the birds died from avian malaria, “one of the major killers of forest birds in Hawaii and one of our greatest challenges to saving these species,” Mounce said.

Experts know mortality is a risk in animal translocations. A 50 percent mortality rate is common, Mounce said, so losing four out of seven wild birds – whom Mounce had higher hopes for – is somewhat expected. Still, “it’s not the way we wanted it to go,” she said.

What’s concerning to Mounce is that the birds contracted the disease despite being released at the 5,100-foot elevation level. She said it could indicate that “the mosquito line is moving up at a faster rate than we had anticipated, which is bad for birds across the state.”

The team has tried to increase mosquito control efforts in the area to minimize the birds’ exposure to disease. However, they don’t have the tools they need for large-scale mosquito control and eradication. The government and private agencies who have promised solutions years ago – such as potentially releasing sterile mosquitoes – aren’t moving fast enough to keep up with the bird population decline, Mounce said.

So for now, researchers like Mounce will continue to put the birds in the best position to survive. Mounce said they’ve learned a lot from this most recent effort – the first time they’ve ever translocated the kiwikiu. They’ve shown that it is possible to catch, move, release and track the birds, and the encouraging news is that the birds stayed in the area they were released to, instead of going back to where they came from, which is common in translocations.

Mounce said it’s crucial to move them from the windward side of Haleakala to the leeward side because there is more space to expand the habitat and population of the kiwikiu.

“This was, I don’t want to say our last hope, but we really still believe that getting them to establish a population on the leeward side is the best hope for them,” Mounce said. “Now we’re just going to have to figure out other things we can do to make that happen.”

The kiwikiu translocation project is a decade-long effort involving the Maui Forest Bird Recovery Project, which is leading the project, and the DLNR Division of Forestry and Wildlife, San Diego Zoo Global, U.S. Fish and Wildlife Service and American Bird Conservancy.

Whether the team relocates more birds will depend on how the first group does. Early results show the birds are foraging close to their release sites, but at times have been tracked as far away as 0.6 miles. Mounce said there are three males and one female remaining, but it’s too early to tell if the female has paired with one of the males. So far, they’ve been foraging separately.

If the team does relocate more birds, it won’t happen until next year at the earliest, DLNR said.