Official: ‘We regret this situation’ 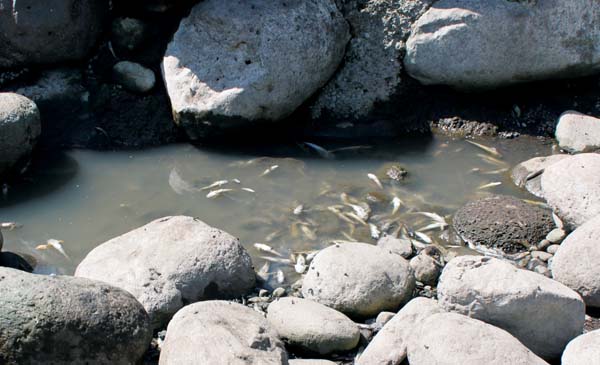 The state apologized Thursday for an unintended “substantial fish kill” that resulted in hundreds of dead ‘o‘opu near where Wailuku River empties into the ocean. The fish kill occurred when water was reduced for the construction of a fish ladder intended to help save native fish and shrimp. The Maui News / KEHAULANI CERIZO photos

WAILUKU — A state project meant to boost survival of native fish and shrimp in the Wailuku River resulted in the deaths of possibly thousands of them.

Emotions ran high as residents tried to rescue native species at the Wailuku River mouth Thursday morning, decrying the senseless deaths in a river the state is supposed to protect.

“I was all sick,” said Robert Iiams Jr. of Paukukalo, who was transporting fish to upstream locations over two days.

The state issued an apology Thursday afternoon for the deaths of the stream life that occurred days after the water was diverted to put in a fish ladder. Reduced river flows for the state Commission on Water Resource Management project earlier this week and low rainfall were cited as contributors to a “substantial fish kill” at the river mouth, state officials said.

“It is obviously ironic that our project to improve stream habitat for ‘o’opu appears to have resulted in loss of hundreds of fish,” said Suzanne Case, director of the state Department of Land and Natural Resources and the water commission chairwoman. “We regret this situation and express our sincere apologies to the Wailuku River community for these events.” 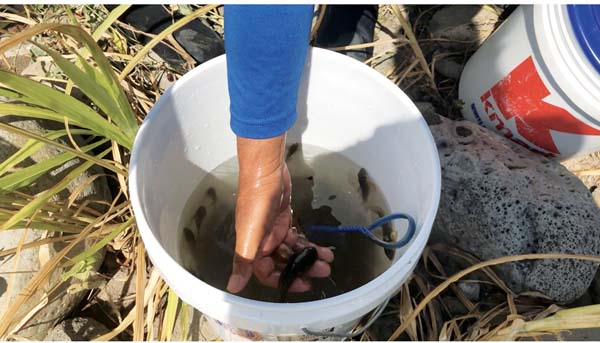 State aquatic biologist Skippy Hau retrieved buckets of what he estimated to be a couple hundred ‘o‘opu that were struggling to survive.

There are five species of ‘o’opu or goby in Hawaii streams, four of them are found nowhere else in the world. Considered an important cultural and environmental resource, the ‘o’opu life cycle involves swimming down to the ocean and back up the river at certain stages of life. As adults, they remain in freshwater.

Portions of Wailuku River were diverted starting Monday to ensure safe working conditions for the water commission fish ladder project in the river below the Market Street Bridge. The commission suspended mandated stream-flow standards for the project.

The ladder, meant to help fish and shrimp travel up a 22-foot vertical wall in the river, was completed late Tuesday and full flows were restored Wednesday and Thursday, according to the DLNR news release.

However, members of the community said water had not returned to the river mouth Thursday night, adding that it takes time for the flow to reach the ocean.

Earlier Thursday, residents who frequent the river mouth were scrambling to rescue ‘o’opu seen floundering on dry stream beds and puddled in pockets of warm water below the project site. 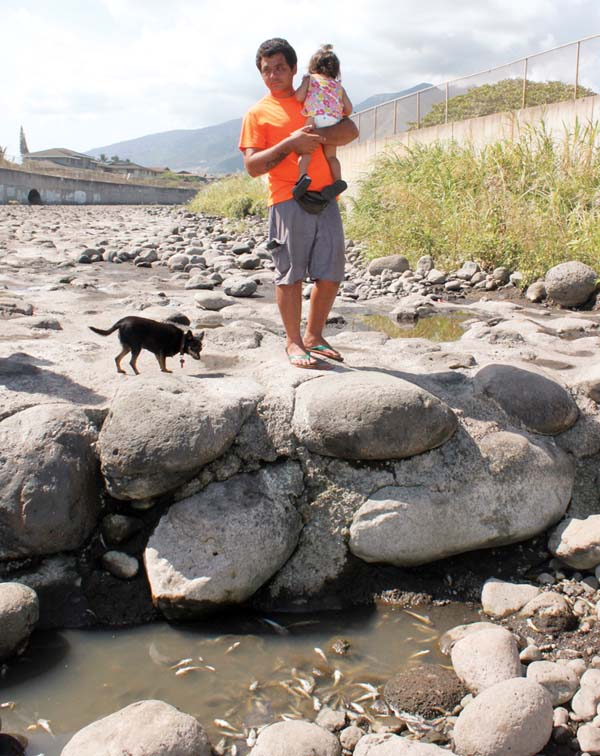 Robert Iiams Jr. of Paukukalo talked Thursday about attempting to rescue native fish over two days at the Wailuku River mouth. A pool of dead ‘o‘opu can be seen.

Small piles of dead fish and shrimp were strewn about the riverbed.

Using nets, volunteers and DLNR Division of Aquatic Resources staff gathered struggling fish and other wildlife in buckets and coolers and transported them to higher Iao Valley streams, hoping they would survive.

Health of the native ecosystem reflects the health of all of Maui’s people, said Lani Eckart-Dodd, treasurer of Hui o Na Wai ‘Eha, a group working to restore and protect four major Central Maui streams and rivers, including the Wailuku River. She and other Hui members were on-site Thursday surveying the damage.

“The fish and opae (native shrimp) and hihiwai (native snails) go up and down the river if there’s water in it,” she said. “Their health is an indicator of our health.”

“And if the streams are not doing good, we don’t have water to drink,” added John Duey, Hui founding member and past president.

Pellegrino said one positive aspect of this week’s “terrible” incident was the community involvement.

“I think the silver lining is the Hui has done the best we can, but really, the community is the one who rallied around this,” he said. “The Hui can’t take the credit for saving what was left, these guys activated so quickly. There were people surfing and they came in, collecting buckets and coolers of fish.

“I guess the silver lining is that as terrible as this situation is, look at what education has done.”

University of Hawaii Maui College student Aheone Kanamu, one of those non-Hui members who turned out, took time Thursday morning to move at least 100 fish over multiple trips.

“What makes Hawaii is our native species . . . We have to save that before we have nothing left,” she said.

The key to survival for endemic ‘o’opu is maintaining mauka to makai stream flow, according to the Bishop Museum’s Hawaii Biological Survey. Stream channelization and diversions can eliminate or significantly limit native fish populations within a stream by blocking flows from the ocean to the upper stream areas.

‘O’opu hi’ukole are considered threatened by the American Fisheries Society, the survey said. ‘O’opu nakea and ‘o’opu nopili are considered species of special concern by the society.

The water commission received funding from the U.S. Fish and Wildlife Service in 2015 to improve biological connectivity in the Wailuku River, following up on the findings of the commission’s Na Wai ‘Eha contested case process that identified the 22-foot vertical structure in the flood channel as an obstacle to the upstream migration of the native ‘o’opu, the DLNR said.

The water commission in 2014 set interim stream flows for the Wailuku River at 10 million gallons per day at Kepaniwai Park and 5 mgd near the mouth of the river following the contested case process and agreement involving the Hui, Maui Tomorrow Foundation, the Office of Hawaiian Affairs, Hawaiian Commercial & Sugar Co., Wailuku Water Co., Department of Water Supply and the commission.

For the fish ladder project, the state requested that Wailuku Water Co. divert Wailuku River flows at the intake above Kepaniwai Park and Mahi Pono divert flows at Spreckels Ditch in the lower reaches to the Waiale Reservoir to ensure a safe construction site.

Installation was completed late Tuesday afternoon and both companies were notified to resume flows, DLNR said.

“Today, CWRM officially notified both companies to reinstate the IIFS (interim in-stream flow standards) and return full regulated flow to the stream,” DLNR said late Thursday afternoon. “Water was returned to the river by Mahi Pono on Wednesday morning and by the Wailuku Water Co. earlier today at CWRM’s request.”