Proposal a welcomed change for some, not appreciated by others 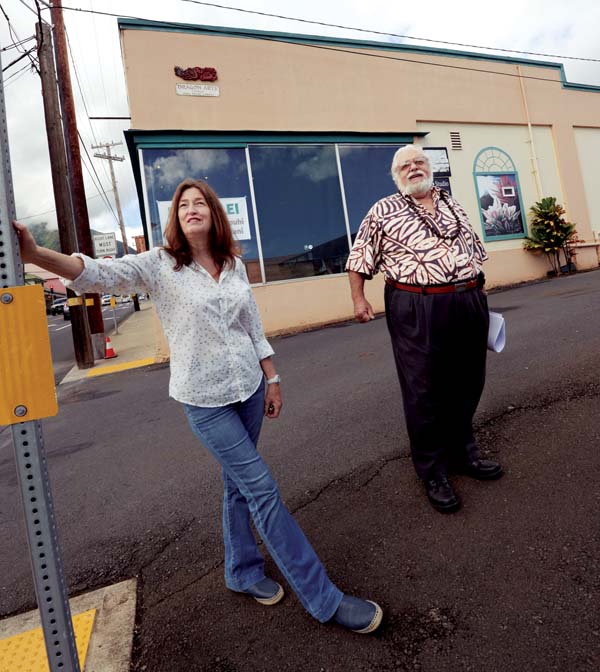 Property owners Jonathan Starr and Helen Nielsen talk about their plans to build a hotel in the center of Wailuku town while walking along the Main Street property Friday. -- The Maui News / MATTHEW THAYER photo

WAILUKU — Longtime Mauians and landowners Jonathan Starr and Helen Nielsen are proposing a “kama’aina business hotel” at the corner of Main and Market streets in Wailuku’s core that they hope will revitalize the town.

“We’re not big real estate entrepreneurs, or a big corporation or conglomerate,” Starr said Thursday. “But we knew we wanted to do something that would really center the town and add vitality to the town.”

And while neighboring owners say they’d welcome an increase in business, they’re also wary of gentrification and the potential loss of Wailuku’s small-town culture.

Geared toward local families and guests attending business, sports, entertainment, medical and community events in Central Maui, the Wailuku hotel would have six stories, 156 rooms and could be open as early as 2021. The hotel would be a midpriced, select-service facility under the branding of Hilton Garden Inn, which has two existing Hawaii locations in Waikiki and on Kauai. However, Starr and Nielsen would continue to own the hotel and an undisclosed partner would manage the operation.

The hotel’s main entry would open to the sidewalk corner of Main and Market streets. Parking on the northeastern corner of Main Street and Maluhia Drive will meet county parking requirements, they said. 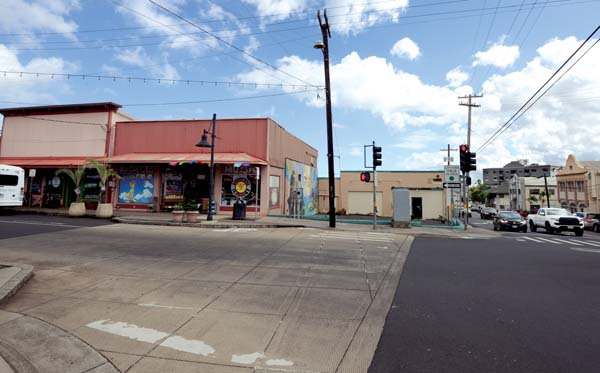 Starr said the proposed hotel will not displace Request Music or other buildings lining Market Street. Starr said the L-shaped building will border Main Street up to Market, filling in the currently vacant corner lot. The mural by Eric Okdeh, which would be blocked from view, is scheduled to be moved. -- The Maui News / MATTHEW THAYER photo

Open, light and walkable are how Starr and Nielsen describe the Wailuku hotel. The project would have a cafe at street level, a small pool and small workout room, along with three meeting rooms that community groups or businesses may use. Interior design will be done by Hawaii-based Philpotts Interiors. The project will be optimized for energy and water efficiency, they said. Also, about 65 full-time employee positions will be available.

Landowners Starr and Nielsen declined to disclose the project cost, but they said the hotel will be privately funded.

Starr spent 18 years working on boards and commissions, serving in roles such as state water commissioner, county Board of Water Supply member and Planning Commission chairman. Nielsen also served on various boards and helped found Maui Coastal Land Trust and other Hawaii land trusts. Together, the two are also known for community work in Kaupo.

“There is not a lot of commercial type of projects that we would have anything to do with,” Starr said.

Starr, who’s owned the five parcels for about 20 years, said he considered other options for redevelopment such as rental properties. 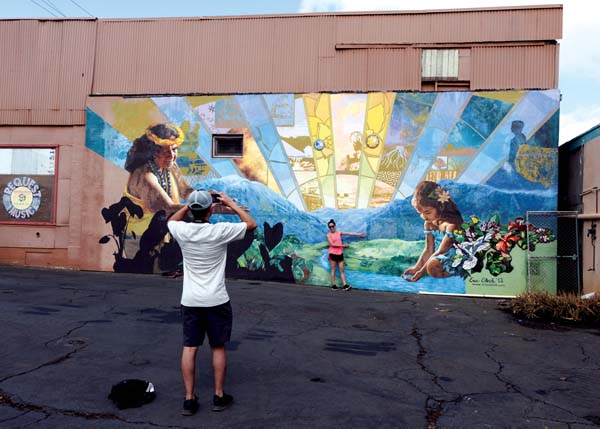 Visiting from Columbus, Ohio, Alberto Alejandra takes a photo of his sister Cervantes Alejandra in front of a Wailuku mural by Eric Okdeh Friday morning. The mural, which was painted at Hui Noeau Visual Arts Center and installed in panels in one day in 2012, is scheduled to be moved to a different location in Wailuku before the hotel is built. Along with paint, it is also composed of stained glass features. -- The Maui News / MATTHEW THAYER photo

“Unfortunately with construction costs and difficulties over time getting financing, we were never able to make it work, even though some of the people we worked with were some of the best in Hawaii and the country,” he said.

Instead, the two began to research hotels about five years ago, after hearing from people involved with the college, hospital, courts, sporting and arts events saying that they didn’t want to stay in Kaanapali or Wailea just to have to drive to Central Maui for events.

“We’re trying to do something different,” Starr said. “We want local people to feel at home, not feel like they’re coming into a place at Cleveland Airport.”

When people worry about changing the character of Wailuku town or gentrification, Starr responded that his hotel will “change it back to what it was.”

He recalled a time when he first came to Maui in the ’60s and Wailuku was the place where people congregated for dinner, shopping, theater and hotel stays.

“We’re trying to bring that back, when people remember the golden age of Wailuku,” he said. “There was thriving business, there were people on the street and colored popcorn in Kress Store. . . . I feel like we’re kind of zeroing back to that.”

Nearby business owners and residents Friday had mixed reactions to the project, with some saying that a 150-plus room hotel is too large and would cause gentrification in one of the last towns to avoid it. The town is already set to see major changes with the construction of the Wailuku Civic Complex, which will include a three-story civic building, plaza and four-level parking structure.

Owner Suzanne Navarro, who’s about to open tropical rum bar Esters nearby at 2050 Main St. with a 10-year lease, said the hotel project will bring money to her bar but then it also “loses culture, which is why we wanted to open a business here in the first place.”

Navarro has lived in the lower east side of Manhattan and in San Francisco and has seen those cities change to “become very gentrified.”

“I have to keep leaving to find somewhere else,” she said. “I hope that doesn’t happen here.”

Malik Cousins, owner of Farmacy health food bar near the corner of Market and Main, said that although the project would bring business to his store, which would be “an obvious upside,” he doesn’t want “complete gentrification and over-running of Wailuku.”

“I serve 90 percent local people right now and it’s special and nice,” he said. “I kind of hope they don’t do it. I think we have enough hotels all around and people can come visit us over here, to be honest.”

Wailuku Coffee Co. manager Dulcie Veraghen, whose work is near the project, said she likes Wailuku the way it is and called six stories “crazy.”

“I feel like we get the business we can handle,” she said. “Some days we are at max capacity. To add even more tourists coming through can be overwhelming. A lot of our favorite locals may have an issue with their spots being taken up and the lines being longer, for sure.”

Donnie McGean, a Wailuku resident, said he doesn’t mind a Wailuku hotel, especially if the zoning already allows for it.

“This is where people have to do business all the time,” he said. “Perhaps they wouldn’t have to rent cars to use the hotel. They could just do their business here.”

Joseph Alueta, owner of Requests Music, the closest shop to the corner of Main and Market, said he doesn’t think the project is a bad thing, but he emphasized smart planning.

“If people know my history, they know I would rather have hotels in urban areas as opposed to the agricultural districts, where they’re building them now,” he said.

Alueta, who grew up in Happy Valley and served in the county’s Planning Department for more than 25 years, also pointed to the history of hotels in the Wailuku area.

The Maui Historical Society listed several on record, including: Maui Grand Hotel, about two to three stories at the corner of Main and Church streets that extended to Wells Street, where the Uptown Service Station is now located; Wailuku Hotel, “several stories high” at the corner of Main and High streets, featuring a garden restaurant filled with orchids and lots of foliage on the grounds (early Wailuku Hotel was not the building which now houses Maui Medical Group); Hotel Iao Needle; Hashi Hotel near Iao School; and the early Maui Hotel on High and Main streets.

Alueta emphasized, though, that there is no such thing as a “kama’aina hotel” and owners can’t select which guests stay.

“There tourists are everywhere — it doesn’t matter,” he said. “Once you make it affordable, there are so many beach backpackers at lower-end hotels who will come. There is no such thing as a local hotel.”

The hotel proposed by Starr and Nielsen of Starr Properties LLC and Market & Main LLC would be developed by Supreme Bright Wailuku LLC. The site is designated urban by the state’s Land Use Commission and is located within the Urban Growth Boundary in the Maui Island Plan. Also, it’s zoned commercial mixed use by the county, where hotels up to 20 rooms are allowed. If additional rooms are sought, a permit is needed from Maui Redevelopment Agency.

Also, the area allows a height limit of 45 feet, which is four stories. In order for the project to be built, height limits for the area would need to be amended, or the project would apply to the Maui Redevelopment Agency for a variance.

MRA will review zoning changes proposed for the Wailuku Redevelopment district at 1 p.m. Friday, which includes increasing the height limit from four to six stories. However, Starr said his hotel does not hinge on those decisions.

Currently, the project is in its final steps before an environmental assessment will be submitted; Starr said the project is close to filing with planning and the MRA.

Also, Starr will be meeting with the community, starting with Rotary and small board meetings, to discuss plans and hear from the public, he said. He welcomed anyone who will host a meeting.

“People have said, ‘Oh, how come you haven’t talked with us?’ “ he said. “We haven’t been ready. We still don’t really have artwork. We’re about two weeks away from it but we’re still changing some things.”