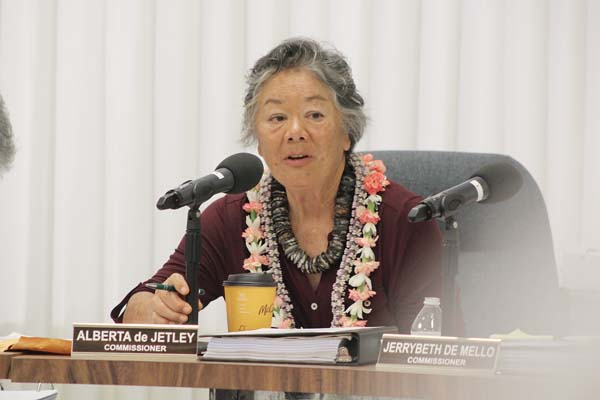 De Jetley’s final meeting with the commission will be Jan. 23; candidates can officially start filing papers to run on Feb. 3.

“I feel that I can serve the Liquor Control Department better as a councilwoman than as a commissioner,” de Jetley said during a break in the meeting.

Council Member Riki Hokama, who currently holds the Lanai residency seat, has to step down after this year due to term limits. 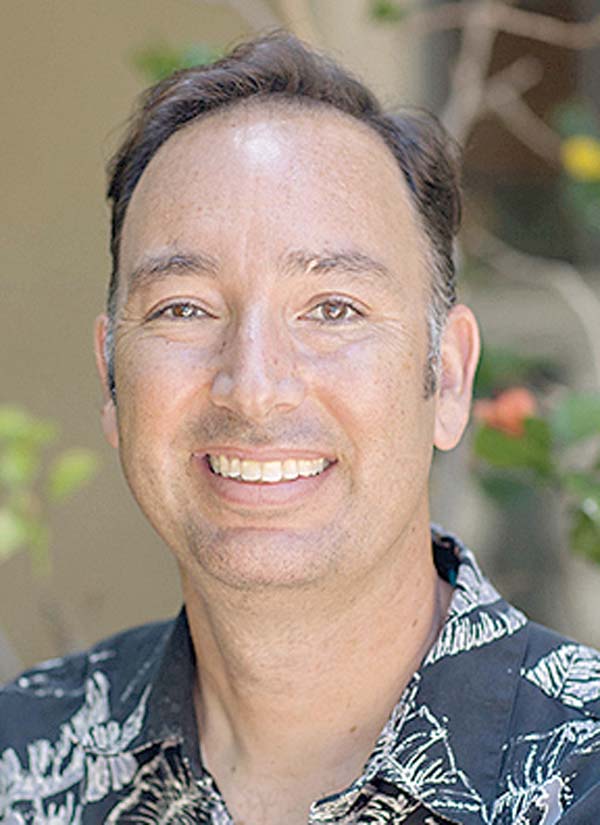 “The more the merrier,” Johnson said. “We get some people in there, that gives the voters a choice.”

De Jetley, who’s run the Lanai Today newspaper for the past 11 years, said she attends all the community meetings on Lanai, and with Hokama leaving, “I realized that I was the most informed person on Lanai, and it was time for me to move on to other things.”

“I have another project that is really dear to my heart that will make a big impact, and I think I can get that project moving forward better as a councilwoman than I can as just a newspaper editor,” she said.

She added that there are big things happening on Lanai, including the possibility of Pulama Lana’i — the company of tech billionaire Larry Ellison, who owns about 98 percent of the island — buying the island’s grid. Hawaiian Electric said Monday that it was approached by Pulama Lana’i and that they were in “exploratory talks.” Pulama Lana’i said it wants to modernize Lanai’s grid and push the island toward energy independence.

“Lanai is not a sustainable island. We’ve never been able to support ourselves, and now we have this opportunity to enter a whole new future for our residents,” de Jetley said. “So I’m really excited about that. I want to be part of developing that.”

De Jetley said that taking Lanai to “the next phase” will require a lot of money, and it’s unclear whether Hawaiian Electric would be willing to spend that kind of money on Lanai. It “makes sense” for Pulama Lana’i to take over, she said.

When asked if she had reservations about a private company owning the grid, de Jetley pointed out that it would still be regulated by the state Public Utilities Commission.

De Jetley was born on Molokai as Alberta Morita and moved to Lanai when her father became the island’s game warden. She graduated from Lanai High and Elementary School, and at age 18 began working for the hotel and travel industry on Oahu and Hawaii island.

She’s also grown fruits and vegetables on her 18-acre farm on Lanai until she gave it up about two years ago.

De Jetley sold Lanai Today to Pulama Lana’i, who hired Nelinia Cabiles as editor. When asked if she was concerned about the company owning a newspaper that would have to keep it accountable, de Jetley said she wasn’t, because “not once in all of the time that I’ve been doing the newspaper have they ever asked me not to publish something.”

Johnson, meanwhile, said he wants to run again because he’s concerned about creating a better future for his daughter, a junior at Lahainaluna High School.

“There’s a lot of things that need to be solved so that we don’t have the constant turnover of young people and families and working-class folks, who have to leave Hawaii to make a living,” said Johnson, who’s a single father.

Johnson wants to see better paying jobs and more affordable housing, and like de Jetley, he’s interested in improving health care options for rural and Neighbor Island residents, pointing out that families on Lanai have to leave the island to give birth, spending money and taking time off from work. One solution on the county’s part could be to set up dorms near the hospital for off-island families, he said.

“Health care is really important, especially for the canoe districts, or the really rural districts. . . . The county could help off-island guys,” Johnson said.

As an organic farmer, Johnson is passionate about food sovereignty and wants to push for an agricultural park on Lanai. He works for Kumu Ola Farm, an aquaponics operation that offers organic produce and fish.

Born in Miami and raised in Cleveland, Johnson earned a degree in English at Kent State University in Ohio and went on to teach English in Japan after college. He landed a teaching internship in New York City before he was recruited to work at Lahaina Intermediate. He moved to Maui in 2003 and taught Japanese and English as a second language at the school before moving to Lanai in 2005. Since then, he’s worked as a bellman with the Four Seasons and as an invasive species technician with Pulama Lana’i.

Contrary to de Jetley, he was hesitant about Pulama Lana’i buying the island’s electric grid and would rather see the county take it over.

“I don’t believe that Pulama Lana’i should own a public utility,” Johnson said. “I like the way Kauai’s model is set up. The word is baked in there — the utilities should be in the public hand. I really wish, if they’re thinking on selling, then the county should think on buying.”

“I know my message is ringing true for people,” he said.