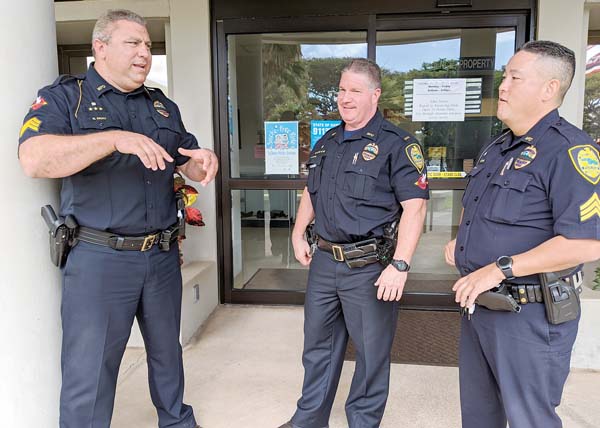 “When you’re dealing with a DUI crash or DUI arrest, time is of the essence because the alcohol dissipates in the blood,” said Lt. William Hankins, commander of the police Traffic Section. “Four or six hours later can make a significant difference.”

Rather than having officers meet a judge to have a paper search warrant reviewed and signed before it’s executed, the electronic warrants are sent by secure email for a judge to review and return, Hankins said.

“Nothing has changed with the way the warrant looks and acts,” he said. “The only thing that’s changed is the method by which it’s being delivered.

“We’re just exchanging emails back and forth, as opposed to spending 30, 40 minutes, an hour and a half, meeting a judge, then driving all the way back to the hospital” to execute the warrant.

An officer won’t have to leave his vehicle to apply for an electronic warrant, Hankins said.

“We’re saving tons of time and getting a much more true and accurate reading of what someone’s blood-alcohol content is at the time of an arrest or a crash,” he said.

Police are using an $8,600 federal Department of Transportation grant to pay for training, consultation and other costs to implement electronic search warrants under a state law that took effect Jan. 1. The cost is expected to drop by half next year.

“Electronic warrants will enable law enforcement to investigate crimes in a timely and efficient manner,” said Maui County Prosecuting Attorney Don Guzman, who has assigned two deputy prosecutors to handle and review the warrants. “In particular, we need effective strategies to combat impaired driving, which are time-sensitive investigations due to the fast metabolization of alcohol and drugs in a person’s body.

“Electronic warrants will streamline this process, reduce the amount of time lost in gathering vital evidence, and provide police officers and prosecutors an effective system to help keep our community and roadways safe, while ensuring appropriate judicial review and compliance with constitutional rights.”

Police worked with the Judiciary and judges to implement the program, which allows for up to 1,000 electronic warrants this year.

While only traffic officers will be using electronic warrants for now, eventually officers in other divisions also could begin using e-warrants, Hankins said.

In the past, police would use forcible extraction to draw blood from suspected impaired drivers, he said.

But the Supreme Court ruled it was unconstitutional to do so without a warrant.

“It’s made it a little bit more difficult for us to get these blood draws, to get a true and accurate reading of blood-alcohol content,” Hankins said.

For warrants obtained by telephone, officers have to record the conversation with a judge and transcribe it by the next day.

That takes hours that an officer otherwise could spend on the road looking for other impaired drivers, said DUI Task Force Sgt. Nick Krau.

With electronic search warrants, “it’ll literally cut the time it takes us to get a warrant in more than half,” Krau said.

“Maui County has an extremely skilled, hardworking, dedicated DUI Task Force,” he said. “But you can only enforce the laws and use the tools made available to us by our elected officials and the community.

“When the Legislature passed the e-warrant law, it was a huge win for public safety and the safety on our roadways. It is definitely a game changer for what we do.”

Sgt. Kenneth Kihata, who heads the Vehicle Homicide Unit that investigates fatal and near-fatal crashes, said electronic warrants could be returned within a few minutes, compared to three or four hours for paper warrants.

Some cases involved fatal crashes and others involved habitual DUI offenders, who have at least two prior DUI convictions within 10 years, and refuse to give blood or breath samples, Hankins said.

“Those are the most dangerous,” he said. “To be able to get blood and get people convicted, it’s all going to save lives in the end.”

He said the use of electronic warrants is another tool for police, who have been working with Mothers Against Drunk Driving and the community to try to prevent an “epidemic” of drunken driving by raising awareness about its dangers.

As of Thursday, police had made 115 impaired driving arrests this year.

This year, police began enforcing a county law allowing police to tow vehicles of drivers arrested for impaired driving. Since enforcement began Jan. 17, about 40 vehicles have been towed, with the registered owners responsible for towing and storage fees generally ranging from $400 to $600.

Hankins said one arrested driver, who had thousands of dollars in tools in his truck, thanked officers for towing the vehicle so it would be safe.

“The people who are getting arrested now know their behavior is wrong,” Hankins said. “The public generally acknowledges that DUI is unacceptable behavior. The hard part is changing the behavior.

“We want to do everything we can to stop impaired driving, to save lives.”