Many say they’re able to cut hair safely with precautions 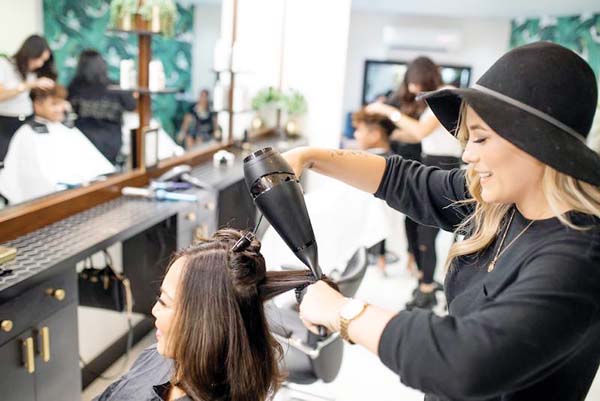 Hairstylist Jade Sumoba works on a customer’s hair at Salon 253 in Wailuku in this photo taken before the salon closed amid the COVID-19 pandemic. Photo courtesy of Salon 253

With online surveys showing 95 percent or more of customers would return if additional precautions were in place, owners of hair and nail salons and barber shops are working with Maui County and hoping for a date soon for reopening their businesses.

Adiel Cline, stylist and owner of Salon 253 in Wailuku, said she and others in the industry will meet next week with Maui County Mayor Michael Victorino’s team of medical professionals to review proposed health and safety guidelines for reducing the risk of transmitting COVID-19 upon reopening.

“It is true, at the end of the day, people can’t wait,” she said. “It’s an overwhelming response for us to open our doors.

“The thing I keep coming to is we just need a date as an industry because we’re an industry of appointments. And you know what appointments require — preparation. By no means, as an industry, do we want to risk our community. At the same time, we do have to have new guidelines.”

After she received a call late last month from Victorino asking about planned safeguards in light of the COVID-19 crisis, Cline brought together Maui salon and barber shop operators to develop the guidelines to protect both clients and staff, she said. Her efforts through www.mauisalon.com grew to include operators statewide. 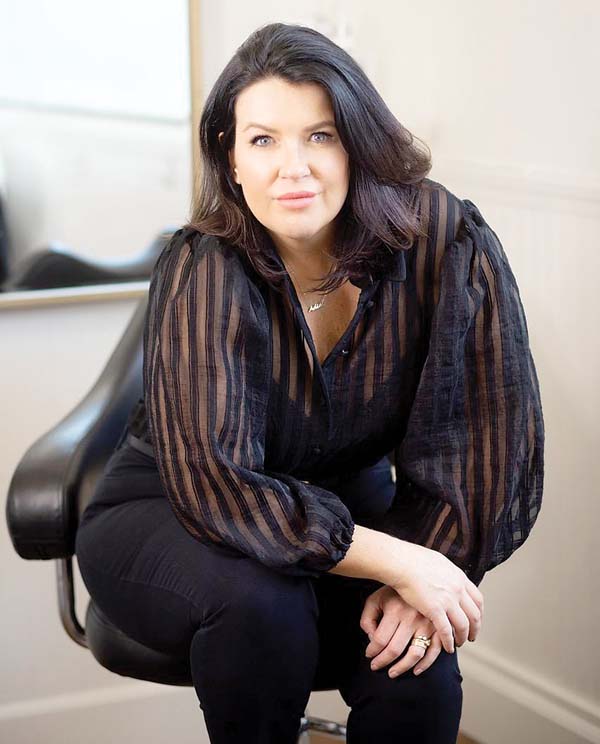 While retail stores and shopping malls are being allowed to reopen Monday in Maui County, Victorino and Gov. David Ige haven’t said when that will happen for hair and nail salons and barber shops.

“We currently do not have a set reopening date for beauty salons,” Victorino said in a statement Friday. “Reopening any area or industry relies on a number of factors, starting with a risk assessment and reviewing potential modifications for safe operations. Opening businesses also depends on the community following the rules, continued available testing and contact tracing, and health care system capacity. We want to make sure all these areas continue to be supported and addressed as we gradually reopen businesses.

“We continue to support our local businesses and strongly encourage them to follow safety procedures and guidelines outlined by the Hawaii Department of Health and Centers for Disease Control and Prevention.”

“With proper health and safety precautions, salons can be safer than grocery stores, pharmacies or golf courses,” Cline said. “We share Governor Ige’s desire to protect public health, and we are confident we can do that, while helping people to look and feel better.”

Ryan Carney, owner of O’Carney’s Barber Shoppe in Kahului and Lahaina locations, said it was “quite baffling” that the industry wasn’t being allowed to reopen.

“We have been placed in an unfair category,” he said. “I don’t believe we should be grouped in the category with mass gatherings or sporting events. We’re well equipped to handle some type of reopening with maybe a little bit of extra precautions. It’s very frustrating for me.”

On Friday, as he was doing electrical work to install a washer and dryer in his Dairy Center shop so capes and towels can be laundered there, three people knocked on the door to ask if the business was open. He also returned 23 voicemails.

“They’re wondering when we’re open and why we’re not,” Carney said.

Seven barbers who rent space from him have been unemployed since the mandate to shut down took effect March 25. “I have seven people that need to get back to work,” said Carney, who also has rent and a mortgage to pay.

“I’m watching my bank account drop down to nothing,” he said. “I need this, we all need this. Small business is the backbone of the community. I’m all about Maui for Maui. Let’s open up small business.”

He said his shops already have 6-foot distancing between customers in chairs and use hospital-level disinfectants to comply with decontamination and sanitation procedures.

“With just a few extra precautions for the public’s safety, for our safety, we’re ready,” he said. “We do want to open and our people want us to open. We acknowledge the world’s in the middle of a pandemic. When permitted to open, we’ll adhere to the new industry precautions.”

Like many others, Carney has let his hair grow and gone without shaving while barber shops have been closed.

“If I can’t touch theirs, I’ll help join the cause, and we’ll all show up together, even though I’m capable of cutting my own hair,” he said.

In an online survey he sent to about 7,000 customers, about 98 percent of the few hundred who responded said that, with some extra precautions to reduce the risk of COVID-19 transmission, they wanted to return to get their hair cut, Carney said.

Cline, who received about 1,100 responses from the salon’s 10,000 customers, had 95 percent say they would return. Her salon has 17 employees who are out of work with the shutdown.

Retired Baldwin High School teacher Helen Tavares was one of the last customers at Cline’s Salon 253 before it closed in March.

“She was already sanitizing everything, they were wearing masks, “ Tavares said. “Everything I touched, they would wipe it down.”

Two other customers and three hairstylists were in the salon that day. “We were kept very apart from each other,” she said. “I felt very safe.”

“I hope they do open soon,” Tavares said.

Kihei resident Sarah Foley, who has gone to the salon since moving to Maui three years ago, said she wouldn’t hesitate to go back because she knows Cline would adhere to strict guidelines, which she said she wants to see all other salons follow as well.

“I’m one who might be affected more than your average 38-year-old,” said Foley, a paraplegic who was named Ms. Wheelchair Hawaii last year. “With that in mind, it’s vital that they are opening with standards in place.

“The sooner they can get that in place for all businesses, the better.”

She said hair and nail salons are important for mental health.

“Our appearance is so important,” she said. “That does so much for you emotionally. We start to really miss those things that help us feel better.”

“Not just the hair, but how you feel when you’re in the chair over there,” she said. “You feel absolutely incredible. My favorite days are my salon days.”

With her roots growing out in the weeks since the salon was closed, Foley said she’s reminded of the early days when she was in the hospital after her accident.

“Everything was super uncertain,” she said.

Then a girlfriend colored Foley’s hair in the hospital sink.

“What that did for me and my ability to keep pushing through the hard time, it was wondrous,” she said. “I don’t know how some of those days I could have pushed through in the hospital without looking my best. I feel that that’s what people are going through right now.”

At Lehiwa Designs Esthetics and Nails in the Wailuku industrial area, owner Reese Owens Yap has had to cancel and reschedule appointments for long-term clients who are like family and friends. Her business has one upstairs room where she does nails and pedicures and another room where someone else offers spa services, including eyelash extensions, facials and waxing services.

The payment area is downstairs.

Because the business is by appointment only, each area has only one customer at a time.

“It’s unfortunate I’m not able to work because I have a perfect setup for it, but I understand I fall into the category,” she said. “My situation is very different and unique. I know that I have taken the necessary precautions, personally, to make sure that upon returning, my clients will have that safety reassurance.”

She said she wants to see guidelines and a timeline in place so the industry can prepare for reopening.

“I think everybody would love to open tomorrow, no matter what industry you work in,” she said. “Everybody’s taking the financial hit right now.

“Yes, we want to get back to work. But this isn’t about making money. This is about making sure we’re safe as industry professionals and that our clients are safe and that when we go home to our families, our families will be safe.”

In her case, Owens Yap said that includes her 88-year-old mother-in-law.

The reopening of salons will be too late for Jeff Mahon, who announced on social media Friday that, after nearly two months without income, he is closing his Lahainatowne Barber Shop and preparing to move with his wife to Las Vegas, where they bought a home for retirement.

“I didn’t want to make the decision,” said Mahon, who is among a handful of barbers on Maui. “Just with the length of the shutdown, I have to cut my losses right now. I would have been able to probably hold on if they would have opened May 1. Going to June 1, that would just push me over the edge. I don’t know if I would be able to recover quick enough.”

Mahon, who grew up in Lahaina, moved back in 2015 and opened his barber shop at a time when there weren’t any in Lahaina. He was 50 and a disabled veteran when he started his barbering career.

His clients have included some of his Lahainaluna High School classmates and their children, as well as many visitors, whose numbers have dropped with the end of direct Mainland flights to Maui and the imposition of the 14-day quarantine requirement.

“The loss of that clientele will make the struggle even harder,” he said.

Mahon said he had hoped that sanitation protocols already in place, including the use of virucidal or virus-killing disinfectants, would be enough to allow reopening of barber shops and hair and nail salons.

At 56 years old, Mahon said he’s too young to retire and plans to continue barbering in Las Vegas, where the industry has been reopened.

“I moved home for my dad, also to be his barber, and I have to leave him,” Mahon said. “That’s the hardest part — leaving my dad and my son and my clients. It was an honor to come home and be my dad’s barber, be my hometown barber.”