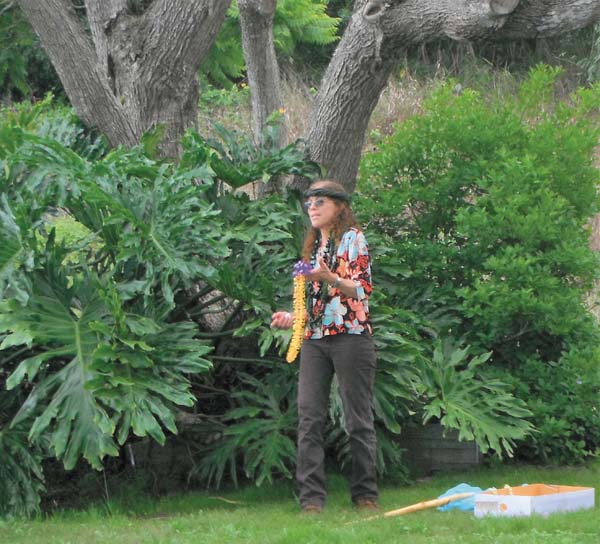 Martha Vockrodt-Moran, who has run the D.T. Fleming Arboretum since 2000, has died. This photo was taken in May 2016 as she held a gathering and awards ceremony at the arboretum for volunteers, affectionately dubbed “native plant nerds.” Photo courtesy of Lucienne de Naie

Martha Haulani Vockrodt-Moran, “a child of the land” who donned her boots and work shirt in the name of protecting and propagating native plants, has died.

Vockrodt-Moran, 68, was a Makawao resident who was mostly known for her work at her family’s D.T. Fleming Arboretum on the southern slopes of Ulupalakua. She died on June 29 after an estimated six-year bout with cancer, her husband David Moran said Monday.

A private service will be held at a later date.

Vockrodt-Moran is credited with preventing the extinctions of native plant species and providing youth groups, hula halau and other community and environmental groups a place to learn about native species, as well as an opportunity to work and protect them at the arboretum, located at the Pu’u Mahoe cinder cone. The land was gifted to her grandfather, D.T. Fleming, from Ed Baldwin of Ulupalakua Ranch, as a reward for Fleming, who introduced a wasp to parasitize the Pamakani weed that was taking over the grazing lands, according to the arboretum’s website. 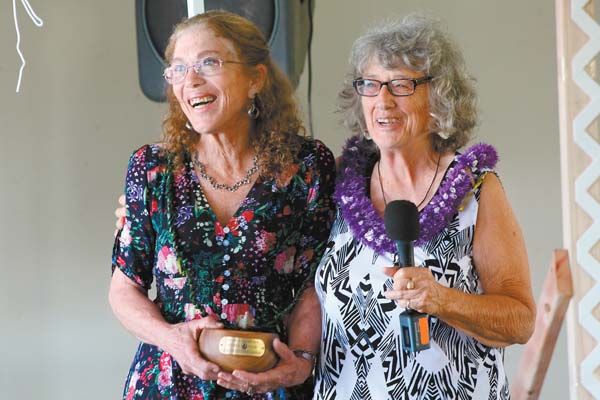 “She truly was a child of the land,” de Naie said Monday.

Last year, Vockrodt-Moran was honored by the Sierra Club Maui Group with the Onipa’a award for lifetime achievement.

At the ceremony, Vockrodt-Moran, who was known for being humble, said that “any award to me is an award to my grandfather and all our volunteers.”

Fleming first had the vision back in the 1950s to set aside an area for conservation.

Vockrodt-Moran recalled how her family would hold “famous turkey lunches” for the 50 to 60 volunteers who came to the arboretum every six months to help clear the land. When Vockrodt-Moran inherited the place from her parents, Jack and Euphence Vockrodt, in 2000, she focused on plant propagation and seed collection with some very rare trees in danger of dying out.

De Naie said she also lost a good friend, whom she assisted in writing grants for the nonprofit arboretum. De Naie, who has written grants for many organizations, said Vockrodt-Moran was always came prepared with all the information needed.

She was also not surprised that Vockrodt-Moran penned her own obituary that appeared in The Maui News on Sunday. Vockrodt-Moran wrote in her obituary that “I lived an ultimate life” and recalled her upbringing on Maui and her parents, along with growing up with horses and cattle.

Fern Duvall, a board member of Friends of the Fleming Arboretum, created long ago to support the arboretum’s goals, said that “Maui lost a completely unique and irreplaceable citizen.”

He said Vockrodt-Moran allowed for research and gave plants to others who were doing reforestation efforts.

“She was completely connected at the deepest and highest levels with plant extinction prevention,” said Duvall, who has known Vockrodt-Moran for more than three decades.

Duvall is also part of many other environmental groups on Maui and is the program manager of the Native Ecosystem Protection Management — Maui Nui Program of the state Department of Land and Natural Resources. He credited Vockrodt-Moran for providing rare on-island species a “secure home.”

Those species include the Melicope knudsenii, which is also known as Olokele Valley melicope, and Kokia cookei, also known as koki’o. He added that Vockrodt-Moran prevented their extinctions and tirelessly worked to increase their numbers.

Vockrodt-Moran was also a talented artist and painted scenes of old Maui, such as the cattle at Makena Landing as well as Haleakala.

“She is just not plants. She is a great artist,” Duvall said.

Vockrodt-Moran majored in art at Colorado State University and worked on her parents’ carnation lei farms in Kula before going on to run a landscaping business. She also painted and entered contests, juried art shows and invitationals with art groups. She later inherited the arboretum.

Moran said even after his wife was diagnosed with cancer about six years ago, “She kept working. She was planting plants.”

He called his wife “hands-on” and said she did everything that the arboretum needed. She expanded the trails and set up the arboretum like a forest, and was working on the lower level of planting, or what Moran called the “understory.”

Vockrodt-Moran last went to the arboretum about four and a half months ago. Even though she was weak, she would walk along one of the trails.

At home under hospice care, she continued to do paperwork, Moran said. She even wrote a check to an insurance company on the day she died, surrounded by her three dogs.

He described her as “a very thoughtful person” who would pack him a lunch even if he said he was eating out that day, “just in case,” Moran said.

“She had a wonderful sense of humor,” he added. “She (was) really very interested in the well-being of her family, her extended family and the community and the world.”

She also used to tell others to just do their best, even in times of hardship.

Moran is now the president of the nonprofit and will meet with the rest of the members to carry on his wife’s vision of the arboretum.

“It’s a little dot in the world, but it’s an important place,” he said.