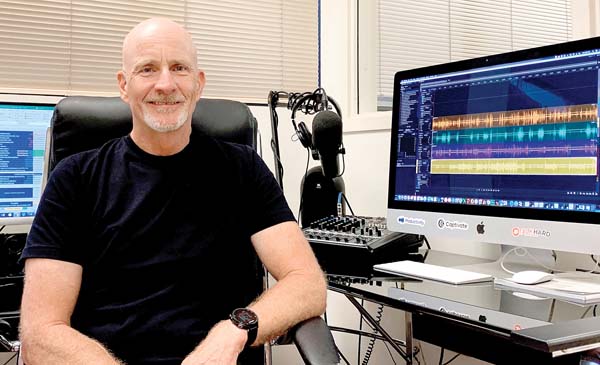 It’s a simple question that often elicits a not-so-simple answer. Runners lace up their shoes and pound out the miles for myriad reasons. To feel empowered. To stay fit. To manage anxiety or depression. To break free from the daily grind. Or just for the sheer joy of it.

Jim Lynch knows firsthand the transformative power of running. As the creator and host of the locally produced “Feel Good Running” podcast, he shares compelling true stories of perseverance and personal triumph. The common denominator? Running.

And Lynch knows a thing or two about running. For one thing, he’s completed 101 marathons (yes, you read that right: 101). He’s also a Road Runners Club of America certified coach, co-race director of the Maui Marathon and vice president of Valley Isle Road Runners’ (VIRR) board of directors.

The Pennsylvania native, 62, started logging miles at age 21 after seeing his older brother reclaim his health through running. By the time he reached his late 20s, Lynch was a full-fledged runner with a growing collection of ribbons and medals. In 1989, he ran his first 26.2-mile race in Los Angeles, and a few years later, made a pact with a friend to finish marathons in all 50 states plus the District of Columbia (which they did). But he didn’t quit at 51; he went on to run 50 more.

Lynch ran his first Maui Marathon 19 years ago (he’s completed a total of five), and somewhere between mile one and the finish line decided he’d like to live on Maui someday. He moved to Kihei in 2012 and stepped into the role of co-race director of the Maui Marathon four years later. In 2017, after he recorded a radio spot to promote the race, several listeners told Lynch he was a natural on the air and should consider hosting his own podcast.

And that’s when a plan began to take shape.

He knew of several popular running podcasts that focused primarily on the mechanics of the sport. But Lynch had something specific in mind.

“I’ve seen so many amazing things come out of running,” he said. “I wanted to tell those stories.” He spent several months unraveling the intricacies of podcasting, and after conquering the learning curve (and stocking up on equipment for his Kihei recording studio), debuted the first episode of “Feel Good Running” in December of 2018.

While the title seems to suggest the show is solely for the fleet-footed, it isn’t. Packed with inspiring, entertaining and edge-of-your-seat stories, the multi-episode podcast appeals to listeners of all stripes: longtime runners, newbies, and those who may be considering hitting the pavement for the first time. Lynch interviews guests from all walks of life, including marathoner Ben Blowes (who earned a Guinness World Records title for running the 2017 London Marathon with a 55-pound tumble dryer strapped to his back), Peter Sagal, host of NPR’s “Wait Wait . . . Don’t Tell Me!” and Bonnie VanDeraa, a runner who beat the odds after surviving a horrific attack.

Lynch hung up his marathon racing shoes several years ago, but still runs every chance he gets. And as co-race director of the Maui Marathon, he gets a different kind of runner’s high watching racers push through the last mile and cross the finish line.

“It’s an amazing emotional experience,” he said. “I’ve had my time out there, and now I enjoy giving back so others can have their time, too. It’s so rewarding.”

It’s not too late to sign up for the 49th annual Maui Marathon on Sunday, Oct. 13. There are five races to choose from: A full marathon, marathon relay, half marathon, 10K and 5K. And it’s never too late to become a member of VIRR, a nonprofit organization that promotes and supports the local running community and produces events throughout the year, including the Maui Marathon. To inquire about membership or volunteer opportunities or for information about upcoming races, visit www.virr.com. VIRR also hosts weekly group runs open to walkers and runners of all ages and abilities at 5:30 p.m. every Wednesday at the Kihei Aquatic Center parking lot (participants should arrive 15 minutes early). To learn more, contact Lynch at jim@runningshoepress.com.