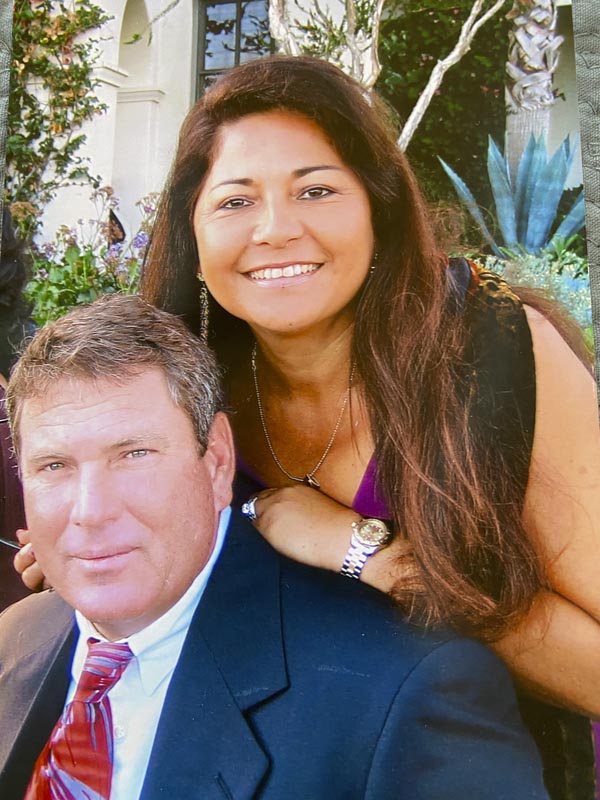 Abi Lawrence was waiting for a red light to turn green 11 years ago when the idea came to her. That day, as she sat idling at the intersection of Kula and Haleakala Highways, she gazed out the car window at something she’d seen countless times before: a large triangular patch of grass punctuated by five statuesque jacaranda trees.

Like so many other Kula residents, she passed by the scenic spot known as the “Five Trees” intersection almost daily. But for Lawrence, it had always been more than a roadside attraction.

“I have so many memories of this place,” she said.

As a child, Lawrence and her family would picnic under the elegant limbs of the jacarandas. And as a teenager, she and her classmates often brought their lunches to the site, where they’d sit and marvel at the spectacular purple blooms.

“That was before King Kekaulike (High School) and the new road were built, so it looked very different back then,” she explained. 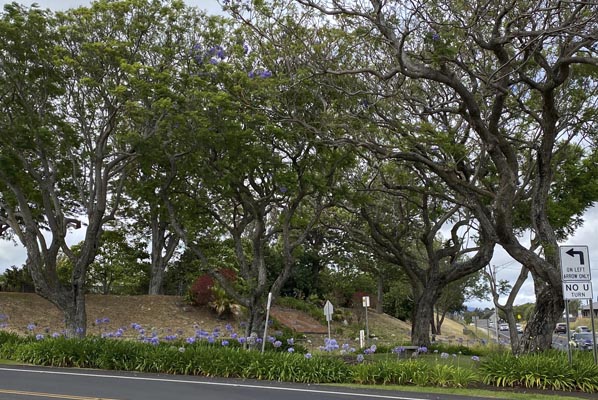 Many of Kula’s majestic jacarandas can be traced to the late George Fernandez, a Territory of Hawaii road cantoneer who had a penchant for planting trees, including the original Five Trees. Fernandez’s family installed a memorial bench within the Five Trees triangle, and the inscription reads in part: “When the Jacaranda trees of Kula send blossoms to your feet, you’ll know it’s Grandpa George again you will meet. He tended them as seedlings and now they stand tall, in strength and in beauty, a gift for us all.” Photo courtesy Abi Lawrence

Lawrence said she made up her mind by the time the light turned green: She wanted to be a caretaker of the place she had treasured for so long. And she had a plan. Lawrence is the special projects coordinator for Kula Glass Company and knew the owner, Jody Boeringa, would want the company to sponsor the maintenance of the site. He agreed without a moment’s hesitation. That’s when Lawrence picked up the phone and called Margo Rowland, the organizer of the Five Trees Project, a community-driven effort that beautified the area in 1998. Rowland says she was delighted by the unexpected call and happily assigned the maintenance of the Five Trees intersection to Kula Glass Company.

And it has been in good hands ever since.

Twice a month, Kula Glass Company sends a landscaping team to tend to the triangle of grass, jacarandas and eye-catching border of blue and white agapanthus. Lawrence will occasionally tag along to supervise and yank a few weeds.

“I have a green thumb, so I really enjoy it,” she laughed.

She and Boeringa are among the many Upcountry residents who have cared for the Five Trees intersection over the years. When major road construction began in the area in the 1990s, community members rallied to protect the jacarandas, an effort that grew in intensity after two of the trees were uprooted and relocated within the triangle; one of the transplants subsequently died and was replaced. In 1998, the community came together to beautify the site, an endeavor made possible by many generous donations of time, money and materials. That fall, volunteers convened for a planting day that — among other things — involved leveling soil, moving heavy rocks and planting grass and the agapanthus. In the years that followed, residents took turns mowing and weeding and caring for the newly planted fifth tree.

Today, they can rest easy knowing it is under the watchful eyes of Lawrence and Boeringa.

“I feel good knowing that I’m helping keep it beautiful so people can enjoy it,” Lawrence said. “I love doing this for the community. . . . It’s a very special place to me and so many others.”

And that’s precisely why Lawrence is in it for the long haul.