Toluta‘u, Seawolves teammates give back with youth rugby clinic 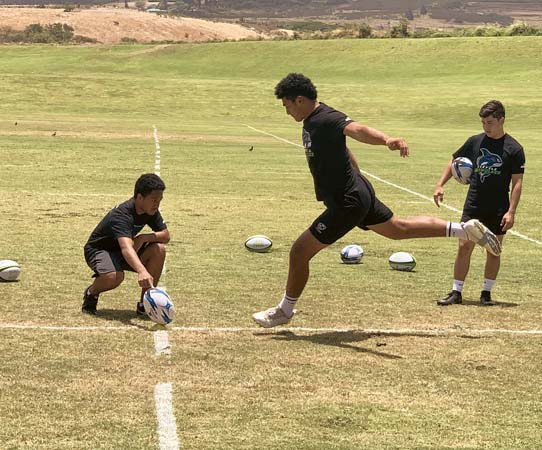 Sione Lolohea prepares to kick a ball held by Felipe Totau as Mitchell Hirose looks on during a clinic with Baldwin High School graduate Vili Toluta‘u and a couple of his teammates from the two-time Major League Rugby champion Seattle Seawolves on Friday at Maui Lani Regional Park. -- The Maui News / ROBERT COLLIAS photo

WAILUKU — Vili Toluta’u remembers being just like one of the youngsters he was guiding on Friday at Maui Lani Regional Park.

Toluta’u, a Baldwin High School graduate and professional rugby player, joined two of his Seattle Seawolves teammates to give a clinic to about 40 youngsters from Maui Rugby Union clubs on Friday.

The Valley Isle talent in the sport was on full display, from youngsters to Sione Lolohea and Mitchell Hirose, both of whom just arrived home from recent international tournaments representing the U.S. in Canada.

The Seawolves have claimed both titles in the 2-year-old Major League Rugby circuit that has taken hold in the U.S. They distributed T-shirts to all of the youngsters and donated 25 brand-new rugby balls to the event as well.

Toluta’u was the Most Valuable Player in the championship match in 2018 and he was joined Friday by All-Star teammates Brad Tucker and Shalom Suniula. 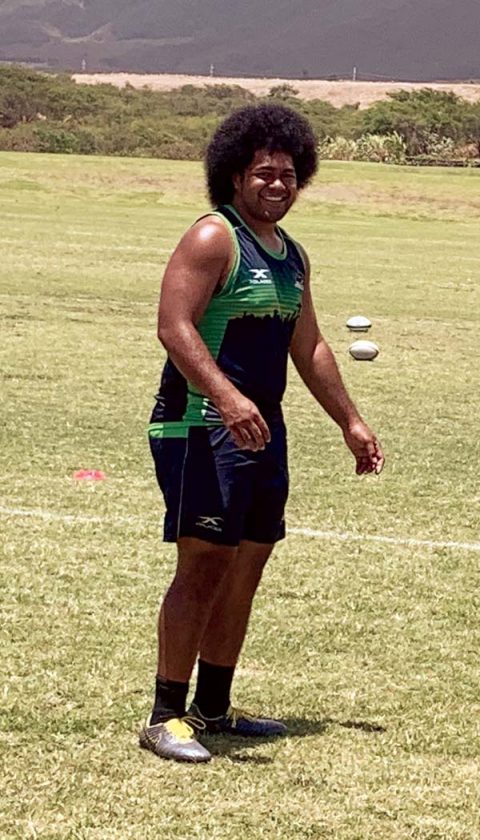 “It feels great because when I was their age I didn’t have the opportunity and access to what they have now,” Toluta’u said. “So, it’s great to bring back a little something for them to work towards with a little skill work and something they can look forward to.”

Toluta’u is in the U.S. national team player pool and is a solid candidate to play in crucial international tournaments this fall, but he is currently spending as much time as he can with his father Kelisimi Toluta’u, who is battling illness.

“In the season, it’s kind of hard — I probably talk to him three times a day just to check up on him, see how he’s doing,” Vili Toluta’u said. “During the season I go play some rugby and then during the offseason I come home and work for Goodfellows and try to stay on the island as much as possible, just be around his presence.

“That warms my heart because every time I come home he wants to do something, like go to the farm, sit under the tree and tell me what to do, or play cards.”

Certainly the life lessons Vili Toluta’u has learned from his father include the need to give back to the place he came from. Tucker and Suniula were glad to help.

“It’s awesome for me,” Tucker said. “I come from New Zealand, so coming here and seeing kids playing at such a young age, it’s great to see. It’s pretty impressive coming and seeing some of the skill sets here.”

Tucker, who is Toluta’u’s roommate in Seattle, said he could see the reason his friend is such a solid player.

“Rugby has certainly got its roots here, you can see that in the kids,” Tucker said. “Vili is my roommate, so I keep a close eye on him. We could see him in the Olympics someday.”

Suniula and Tucker have an international rugby connection — Suniula is an American Samoa native who spent several years in New Zealand. He has lived in the U.S. for the last 11 years.

Toluta’u suffered a broken leg early in the MLR season, but was back in time for the playoff semifinals and final in June.

“Vili definitely hit the season off really well and just his presence on the field is so important, you can see it,” Suniula said. “It’s just good to see him excel in a new professional environment.”

Suniula added that he was also impressed with the youngsters he observed on Friday.

“There’s a lot of raw talent out there,” Suniula said. “You can see that with a little bit more exposure and training for these kids, they can go a long way.”

Lolohea, a 6-foot-6, 250-pound rising senior at Maui High, just starred in a tournament in Canada, helping his U.S. team sweep all three of its matches.

“It was very good, playing with a good team and good coaching, so I learned a lot of stuff up there,” Lolohea said. “We got to play some good teams and next year they said that there will be more teams.”

While Lolohea played in a traditional 15-player per team event, Hirose took part in an international tournament in sevens. Hirose is a 2019 Maui High graduate who will play rugby at Central Washington University, where Toluta’u graduated from in 2018.

“When I was out there I had to adapt to how they wanted us to play and I feel like I got better,” Lolohea said. “It was my first game of 15s, so I feel like I adapted to it pretty quickly.”

Lolohea is being heavily recruited for college rugby and football, but he said he’s “leaning towards rugby right now.”

He was grateful for Friday’s opportunity to learn from professionals.

“We have a lot of talent on this island, and it’s good because lately it’s been growing,” Lolohea said. “With things like this it can help the kids go out and play the sport that they love.”