Basil Othman of Benicia (Calif.) takes down Lahainaluna’s Jesse Dudoit on his way to a 7-5 win by decision in the boys 145-pound final. — The Maui News / MATTHEW THAYER photo 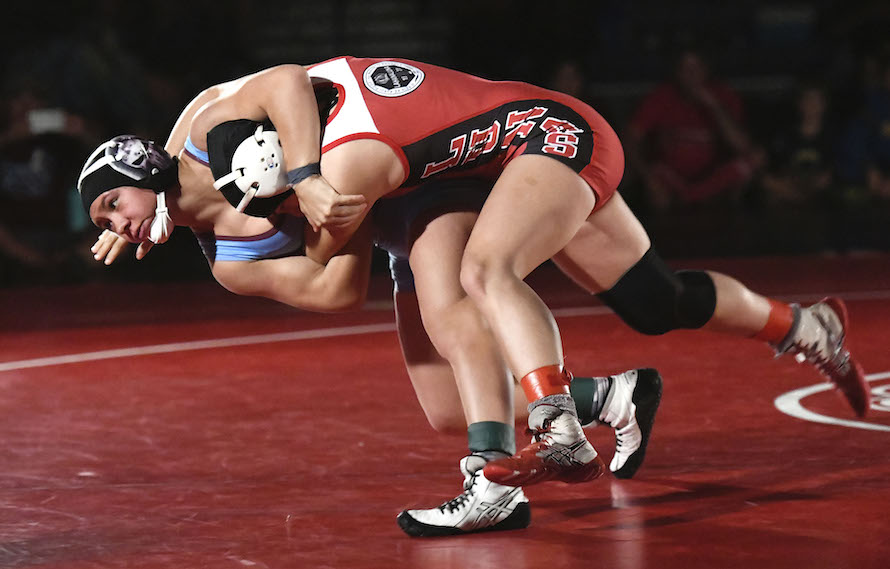 Perhaps the most anticipated match of the night came when five state titles stepped onto the red Lahainaluna High School mat under the lights at the Lahaina Civic Center.

Cousins Nanea Estrella of Lahainaluna and Waipuilani Estrella-Beauchamp of Baldwin did not disappoint the standing-room-only crowd.

The rumble in the gym started as the two approached the mat — Estrella held a 2-1 head-to-head advantage last season in three close matches.

On Saturday, it was Estrella-Beauchamp who came out on top 11-3 in the 132-pound girls championship match. 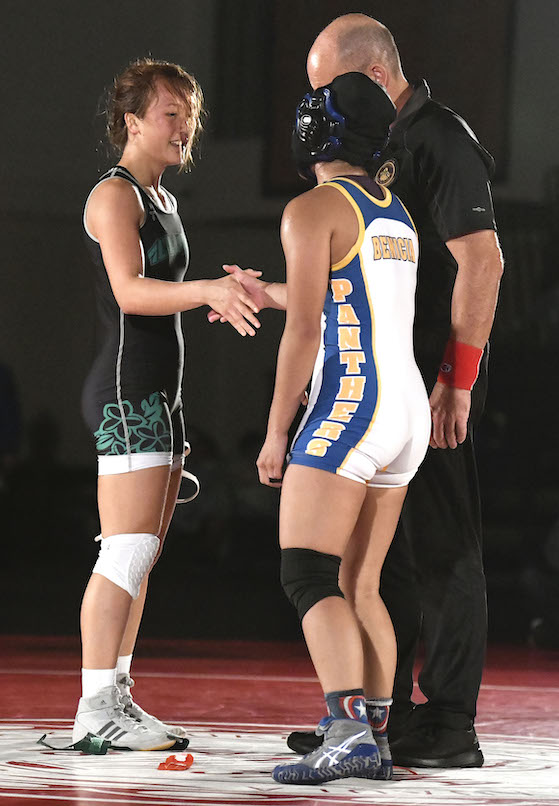 “It means a lot in trying to improve and grow,” Estrella-Beauchamp said amid a crowd of well-wishers waiting for congratulatory hugs. “Honestly, Nanea pushes me. She pushes me to my limits. I’m just so happy and thankful that I get to wrestle her because she makes me better.”

Estrella-Beauchamp’s victory helped the Bears win the girls team title with 194 points, while Lahainaluna was second with 158. Benicia, Calif., was third at 145, Waianae (128) fourth and Molokai (93) fifth.

At the edge of the mat, Estrella-Beauchamp couldn’t hold her enthusiasm any longer — she ran into the center circle. The adrenaline continued to flow as the Bears senior bounced out to a quick 5-0 lead on a takedown and near-fall seconds into the match and led 7-1 at the end of the first period.

Estrella-Beauchamp’s takedown was the only scoring in the second period, leaving her ahead 9-1 going to the final two minutes. Estrella, a three-time state champ who has committed to wrestling at Menlo College in California, scored a takedown early in the final period, but could get no closer. 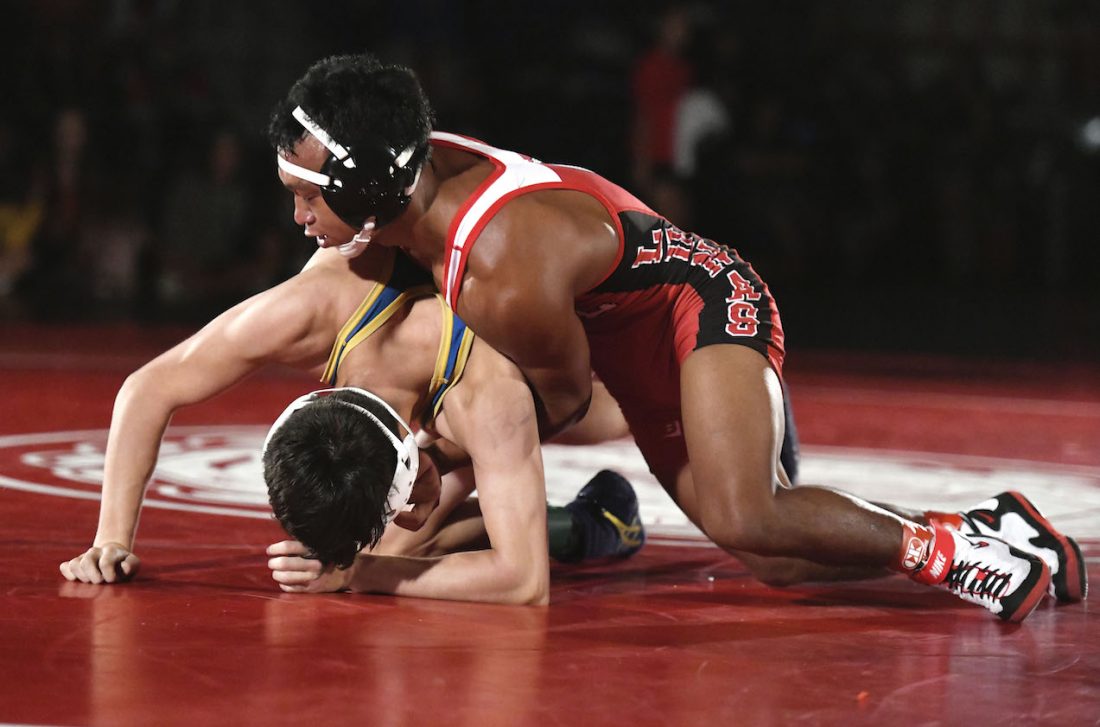 “The quick start did play a big importance — I went into the match just trying to feel it out, see the openings,” Estrella-Beauchamp said. “I felt that opening and I took it.”

Estrella said that the loss will help her in the long run.

“Definitely, I did feel that I was going into the season a little bit dry and not motivated,” she said. “This definitely gives me that good kick-start.”

Estrella admitted that if she has to lose, there is no one she would rather lose to than her cousin.

“She definitely had a good game plan,” Estrella said. “We talk sometimes, but mostly as just girls, just cousins.” 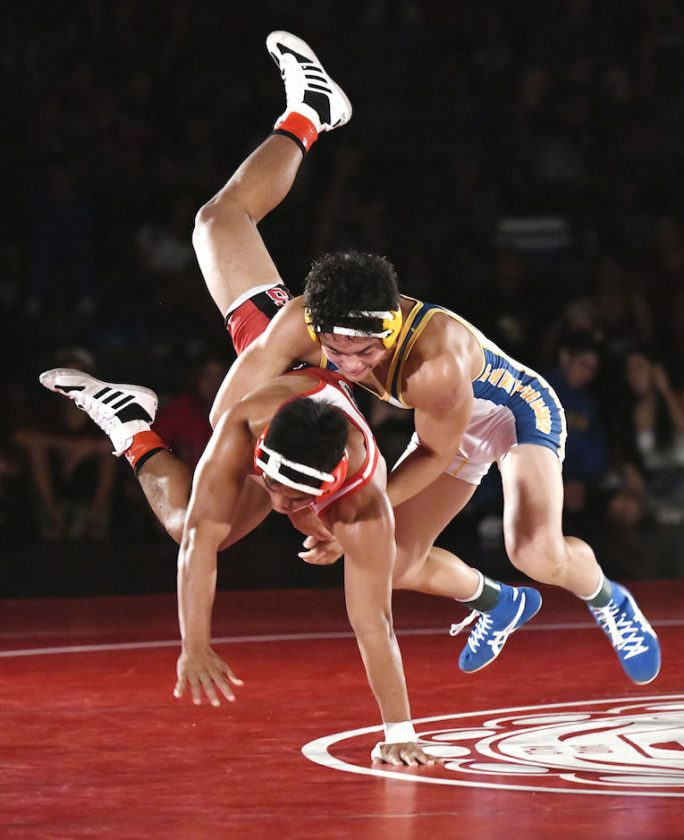 Basil Othman of Benicia (Calif.) takes down Lahainaluna's Jesse Dudoit on his way to a 7-5 win by decision in the boys 145-pound final. -- The Maui News / MATTHEW THAYER photo

Estrella’s college destination is determined — Menlo is the defending women’s national college championship team — but she feels her cousin is just awaiting a spot of her own at the next level.

“She is definitely coming up a level, she’s more experienced than a lot of girls — she’s good, yeah,” Estrella said.

Lahainaluna’s Kanoa Lanoza won the boys 132-pound title with a 5-1 win over Brandon Reynolds of Benicia.

“Especially going against a Mainland person, that’s a big help for us,” Lanoza said. “We get to just battle with hammers all the time and that’s going to make us better. Not just me, but my whole team. I’ve just got to set the pace for my team and we should be good.”

Earlier in the evening, Keeya Bicoy of Molokai won the Farmers’ only title of the tournament with a dominant 8-0 win over Mia Bonotan of Benicia in the 117-pound girls final.

“It gives me a lot of confidence because I was really scared to wrestle someone from the Mainland,” Bicoy said. “And to win against that competition makes me feel even better.”

Bicoy, a senior, brought home a fifth-place medal from the state tournament last year. She is debating between college wrestling or track and field, where she runs the 100 and 200 and throws the shot put.

“State title, that’s the goal,” Bicoy said of the wrestling season. “All the great girls we have in the (Maui Interscholastic League), they make me want to do better because if they can do it, I can do it, too.”

Said Molokai coach Randy Manley: “Hopefully this is a huge confidence booster for her and just gives her bigger and better goals as she goes through this.”

Baldwin’s Maake Panuve beat teammate and training partner Nephi Laga in the boys 220 final with a pin in 5 minutes, 9 seconds.

“It helps me a lot knowing that there’s a lot of teams here from other islands and that I can compete helps me focus more and realize what I can truly do,” Panuve said. “It’s hard wrestling Nephi, but we both know that it can benefit both of us.”

In perhaps the most exciting match of the night, Baldwin’s Tobey Ravida beat Benicia’s Lorenzo Gunn 6-4 with a takedown in overtime. The match was sent to the sudden-death extra period after a protest was upheld for a locking hands infraction and a penalty point awarded to Gunn late in the match, tying it at 4-4. The match was delayed for several minutes.

“I was calm, I knew I had to stay calm the whole time and just keep wrestling,” said Ravida, a sophomore who was a state runner-up last season. “It felt so good, I got over-emotional, but it’s a victory.”

Ravida and Gunn spoke for several minutes after the match and hugged.

“He’s pretty good, man,” Ravida said. “I’d like to thank him for coming down to Maui and wrestling at this tournament. I appreciate the competition.”

The outstanding wrestlers for girls were Kamehameha Maui’s Ashley Palimoo, the 127-pound champion, for the 127-and-below weight classes and Estrella-Beauchamp in the 132-and-above weight classes.

The outstanding boys were Lanoza for 145 and below, and Kaimuki’s Harry Lloyd, who won the 285-pound title.

Awards for fastest pins went to Miguel Acuna of Benicia, who had a 9-second pin in the boys 120 class, and Waianae’s Tiare Carlson, who had pins of 21 seconds and 35 seconds in the girls 145 class.

Most pins awards went to Baldwin’s Leialoha Kaili for her three pins in a total of 5:37 at girls 107, and Jian Perseveranda of Benicia, who had three pins in 2:52 at boys 170.