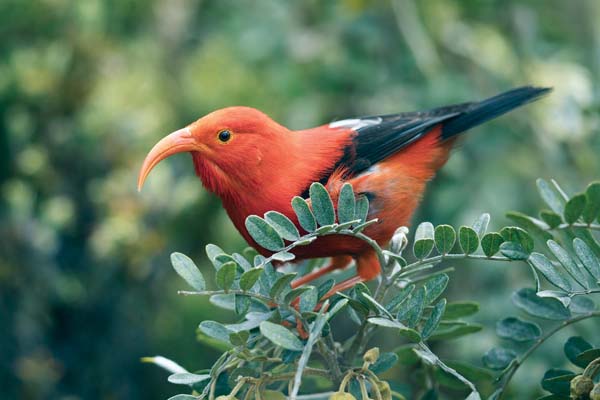 A threatened native bird that usually prefers higher elevations is starting to appear around residential areas Upcountry, an encouraging sign to experts who want to see the bird move back to its former habitats.

The iconic ‘i’iwi, also known as the scarlet honeycreeper, has been spotted twice in the past month in Kula and Olinda, said Hanna Mounce, project coordinator for the Maui Forest Bird Recovery Project.

“We don’t know what is facilitating that movement,” Mounce said Wednesday. “Somehow some of these birds are finding the lower elevation habitats appealing to come down to and (are) at least surviving for some amount of time, which is exciting.”

A scarlet bird with a long curved beak, the ‘i’iwi usually spends its time around high-elevation areas like Haleakala National Park’s Hosmer Grove or the Kula Forest Reserve, out of the reach of mosquitoes that can transmit diseases like avian malaria.

With about 600,000 left in the state, according to the National Audubon Society, the ‘i’iwi is not in danger of going extinct, but a steep decline in population was enough to land the bird on the threatened species list in October. About 90 percent of the bird’s population lives on Hawaii island and Maui between 4,265 and 6,234 feet in elevation, according to the U.S. Fish & Wildlife Service.

“These birds are basically bottlenecked in high elevations because of disease,” Mounce said.

Two years ago, someone reported an ‘i’iwi at the Pukalani Golf Course, Mounce said. But the bird was a juvenile, which wasn’t too unusual since the young birds may be searching for new habitats. The bird was dead by the time the Maui Forest Bird Recovery Project found it.

But recently, a visitor to the Ali’i Kula Lavender Farm posted photos on Facebook of an unidentified bird spotted at the farm. The Maui Forest Bird Recovery Project confirmed that it was an adult ‘i’iwi. That same week, an Olinda resident sent recordings of a bird to project staff, who identified it as the song of an adult male ‘i’iwi. Mounce said the bird has been at the Olinda resident’s property — which sits at about a 3,200-foot elevation — for a copule of weeks now.

What’s unique about these sightings is that they’re adults, which don’t usually fly about looking for new homes, and that they’re surviving, which could indicate that some of the birds are more tolerant to disease. But Mounce said it’s hard to say what could be drawing the birds to lower elevations. It could be because their normal habitats are getting crowded, or perhaps the colder weather is lowering the chance of mosquitoes infecting the birds.

While two sightings may not sound like a lot to some, wildlife biologist Fern Duvall said they’re “very significant.”

“The good thing about these sightings, especially the one at the lavender farm, is that the birds are fully capable of utilizing non-native flower species. They don’t just need the native ones,” said Duvall, Maui Nui manager of the Native Ecosystems Protection and Management program under the state Department of Land and Natural Resources.

Duvall said Bishop Museum records show the ‘i’iwi had inhabited the lower-lying areas of Maui, including Wailuku, but that the introduction of mosquitoes to Hawaii, habitat loss, invasive species and predators such as rats and cats drove the birds to higher locales.

“We definitely believe that if we were able to control mosquito numbers . . . that we would have our native birds down and around at low elevation,” Duvall said. “That really is the goal. We really think (the mosquito) is a major driver in keeping the birds up in the cold areas and high in the mountains.”

Duvall said it’s unusual and exciting to see the birds at lower elevations, and that it’s up to people to “make sure it’s safe” for the birds to hang around. That includes controlling the mosquito population, which state and federal officials and the University of Hawaii are trying to do by sterilizing male mosquitoes in the lab using a bacteria called Wolbachia.

Conservation groups are also working to plant native trees and restore forests around Maui to expand habitats for the ‘i’iwi and other native birds. Residents can help by planting native trees like flowering ‘ohi’a and mamane, controlling pets and feral animal populations and getting rid of invasive species, Mounce said.

Duvall encouraged people to report possible sightings to the recovery project by calling 573-0280 or emailing info@mauiforestbirds.org. Adults are red with black-and-white wings, while juveniles are yellow with black spots.

“The ‘i’iwi is probably Hawaii’s world-class bird in terms of its beauty, the way it sounds, the way it acts,” Duvall said. “People who come here, that’s the bird they want to go see.”

For more information about the ‘i’iwi or to listen to its calls, visit mauiforestbirds.org.