Arakawa eyes a run for council 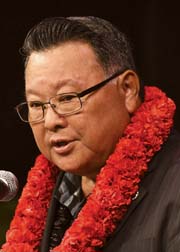 That became clear Jan. 30 when he filed his campaign’s organizational report, listing his “office sought” as “Maui Council.”

After publicly flirting last year with the notion of running for lieutenant governor, Arakawa said in November that he was “leaning very strongly” toward running for his former Kahului council residency seat. (He was the Kahului council member from 1995 to 1998 and again from 2001 to 2002 after he sat out from 1999 to 2000 following his failed bid for mayor in 1998.)

The mayor is ineligible for re-election because of term limits. He has served as mayor for a single term from 2003 to 2006 and now two terms from 2011 to the present.

In a campaign spending report filed the same day as his organizational report, Arakawa showed he had $94,298 cash on hand in the first half of last year and had total receipts of $100 in the second half. He reported total expenditures of $12,875, leaving him with a cash surplus of $81,523 as of Dec. 31.

In an October proceeding before the commission, Arakawa was represented by attorney David Minkin, a partner in the McCorriston firm since 1995.

The amounts paid to the firm total $9,053.12, or slightly more than 70 percent of Arakawa’s campaign expenses in the second half of last year.

On Saturday, Maui News attempts to contact Arakawa for comment by his home phone or cellphone or through county administration spokesman Rod Antone were unsuccessful.

In recent years, Arakawa has run afoul of the state commission responsible for enforcing Hawaii’s campaign spending laws. It has alleged that the mayor’s campaign contributed more than double the legal limit for contributions to charitable and community service organizations.

Arakawa has insisted that his expenditures were for advertising, not donations. And, he has suggested the commission’s investigation against him is a vendetta.

In October, Minkin represented Arakawa before the commission and told members that it appeared the case against the mayor was “beginning to look like a witch hunt” and a “self-fulfilling prophecy to justify the work that was done,” referring to the commission staff’s two-year investigation of Arakawa’s campaign expenditures.

Charitable contributions are limited ($8,000 for mayoral officeholders) by state law to prevent seeding the community with “goodwill” donations to buy votes.

In December, the commission decided to give commission officials and attorneys for Arakawa, his wife and campaign treasurer time to negotiate a settlement. The next commission meeting on the matter is set for Wednesday in Honolulu.

Arakawa’s campaign spending report for expenditures from July 1 to Dec. 31 shows the following expenditures as “advertising” that’s “directly related to the candidate’s campaign:”

• $150 on Sept. 21 to Maui Economic Opportunity Inc. for a table at the 44th annual Maui County Senior Fair.

• $100 on July 24 to the Philippine Cultural Foundation of Hawaii in Honolulu for a full-page ad in a program booklet.

• $16.67 on July 13 to Ultra Hawaii for scorebooks for Friends of Alan Arakawa-sponsored senior softball team, the Dragons.

In October, after a two-year commission staff investigation, the panel heard a complaint against Arakawa showing that, at least twice, his campaign allegedly falsely described the purpose of campaign expenditures, reporting them as “advertising” expenses (for which there are no limits) when they were actually donations to Maui nonprofits and organizations.

In a first complaint, now superseded by a second, commission staff reported finding 57 suspect “advertising” expenditures to 41 nonprofit and community organizations amounting to $45,500. Further investigation led to a Dec. 8 filing by the commission against Arakawa, his wife and campaign treasurer. It alleges a single count of “excess donations to charitable organizations.”

Unrelated to the mayor’s case before the commission, Arakawa’s campaign expense reports spending $468.75 at Maui Bling By Deneen LLC in Wailuku on July 6 as “Ordinary & Nec Expenses (*ELECTED OFFICIALS ONLY)” for “nominal gifts for foreign dignitaries — business card holders.”