Complaint alleges improper use of county email in a ‘political attack’ 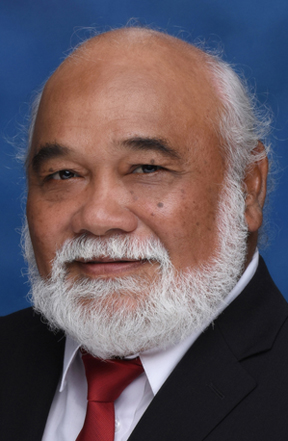 Mayor Alan Arakawa has filed two complaints with the county Board of Ethics against Council Member Alika Atay for listing his council office on a political ad and sending a mass email to county employees in what was “clearly a political attack.”

Staff of the state Campaign Spending Commission also plan to refer a separate complaint against Atay to the state attorney general’s office in the next couple weeks, which includes a fine of $2,700 for violating campaign spending laws.

The first ethics complaint cites a political ad for Atay published Sept. 30 in The Maui News’ county fair supplement. The ad, which reads “ALOHA VOTE ATAY” in large letters with a picture of him and a woman standing next to him, shows that it was paid for by Friends of Alika Atay and lists the county building address at 200 S. High St. in Wailuku.

“I believe this to be a use of county property for something other than public activity or purpose,” Arakawa wrote in his complaint, referring to County Charter article 10-4.

The other complaint stems from a mass email Atay sent from his council email address to county workers regarding a $100,000 grant awarded to his executive assistant for events celebrating Queen Ka’ahumanu’s 250th birthday. County officials recently terminated the grant after Atay’s executive assistant Brian Bardellini failed to provide missing documents and answer questions from the Office of Economic Development. 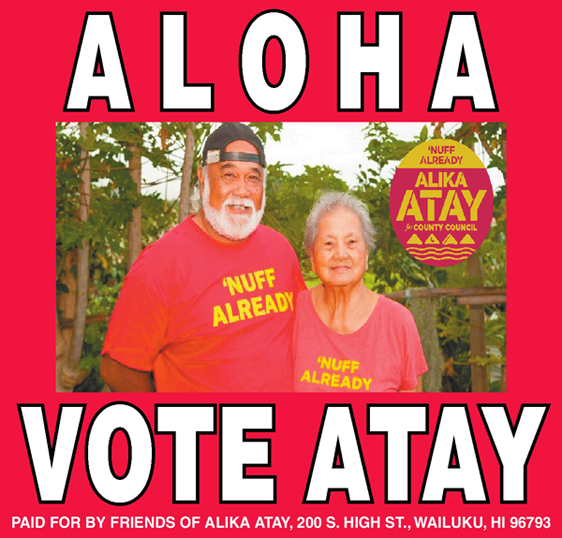 This is the campaign ad for Alika Atay that appeared in The Maui News Maui Fair supplement published on Sept. 30. Mayor Alan Arakawa has filed complaints with the county Ethics Board because the election ad contains the address for his council address.

Attached to the email is a three-page letter by Atay claiming wrongful termination of the grant, the county wrongfully withholding money and other issues. In the email, Atay writes, “As you are a county employee, I thought you should know the facts and the truth,” and he also posted the letter to his personal and campaign Facebook pages.

Atay complained that meetings held by the County Council Budget and Finance Committee on the grant coincided with the mailing of absentee ballots for the general election and occurred just before the primary election, which is “evidence of a well-planned and a coordinated strategy to discredit me and my staff and sway the upcoming election to maintain an old guard majority.”

He added that Bardellini has never broken a law, policy or “committed any actionable offense in my presence.”

Atay claimed Bardellini has discovered that council members Riki Hokama and Mike White as well as Corporation Counsel Pat Wong, Office of Economic Development staff and Arakawa are “misappropriating tens of millions of dollars and engaging in various wrongdoings.” The email or letter did not include any documents to support the claim.

“Mr. Bardellini’s attempts to represent the public trust and the public monies has resulted in this focus on him and myself to deflect our exposing these facts in a credible manner,” Atay wrote. “These efforts are to stop us from continuing the work I was elected to do; represent the people with truth, justice and dedication to keeping Maui, Maui.”

An email and phone call to Atay were not returned Wednesday afternoon.

In the complaint, Arakawa wrote that Atay made unfounded allegations against numerous people including himself. He argued that Atay violated county law by using email addresses in the county email system, which were acquired in the course of his official duties, and sent out the mass email for his personal gain.

Arakawa added that Atay’s use of his council email for the email blast also violates the County Charter.

“These statements clearly go beyond explaining his position in regards to the 250th Celebration of Queen Ka’ahumanu Grant and instead go into a political attack upon myself and others,” he said.

Arakawa said Wednesday that Atay’s actions were “breaches of law” and that his office is looking into how Atay was able to send the mass email to county workers. The mayor said even he does not have access to the county email system, which is a deliberate safeguard.

“They cannot be doing political positioning on the county website, and they shouldn’t even have access to all county employees’ emails,” Arakawa said.

Ethics Board Chairman Matt Macario said he received the complaints Tuesday, but he did not feel comfortable commenting on them until after the full board has reviewed the allegations. The board’s next meeting is scheduled to take place Nov. 14, after the Nov. 6 general election, according to its agenda.

“We haven’t had an opportunity to do anything in response of it yet, but I expect to address it at the next meeting,” Macario said.

In the campaign spending issue, Atay was fined by the commission in September for two counts of unauthorized handling of campaign funds and five counts of allegedly making false reports.

The commission found that Bardellini, who serves as chairman of the Friends of Alika Atay, wrote 14 checks totaling over $12,000 drawn from the campaign account, and Atay wrote two checks totaling close to $200 from the account. For the false reports, staff noticed inconsistencies between bank records and reports filed with the commission.

Commission Executive Director Kristin Izumi-Nitao said Wednesday that Atay did not attend the meeting with the commission on Sept. 12, or pay his fine, which was due nearly a month ago.

“Alika has done nothing to comply with our order,” Izumi-Nitao said.

Once the case is referred to the attorney general, the office could obtain a court order to enforce the commission’s order, Izumi-Nitao said. She noted that if Atay were to win the election for his Wailuku-Waihee-Waikapu council residency seat against former Council Member Alice Lee, he would not be able to assume the office until he paid all of his fines and submitted all of his reports to the commission.